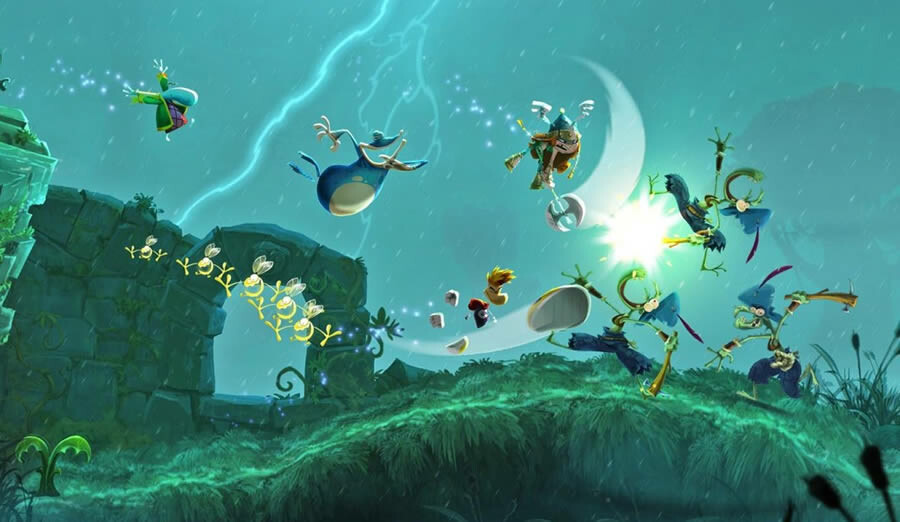 Written by Jon Sutton on Tue, Sep 10, 2013 10:02 AM
Rayman Legends
Where does Rayman Legends rank in the list of the most demanding games?
100+
Rate this game User Rating
What's your user review score for Rayman Legends?
9.83
Ok Not Ok Optimisation
How well optimised is Rayman Legends for PC? 10
10

The first thing that hits you when you boot up Rayman Legends for the first time is just how gobsmacking it looks. Everywhere you look there’s an incredible level of attention to detail and finesse in the hand-drawn levels and characters. Everything around you feels alive and has some level of movement attributed to it; it’s the closest you will get to stepping into Rayman creator Michel Ancel’s mind.

Rayman Legends has a typically perfunctory story that entails Rayman, Globox and their Teensie friends accidentally falling asleep for a hundred years. We’ve all been there, just one more hit of the snooze button and before you know it you’ve missed the bus…

Anyway, of course all manner of bad things happen during while Rayman and co are konked out, forcing you to save the ten princesses from the evil magician and the Bubble Dreamer.

At this stage you might be forgiven for thinking that this game had about as much ambition as a New Super Mario Bros. game but think again.

Rayman Legends has you trotting through various locales on the hunt for the obligatory maidens in distress, but to focus on that would be to miss the point. If superlatives aren’t your thing it’s best to look away now...

This game essentially boils down to how it plays and looks, and it achieves both of those aspects to the absolute highest level. Every level brings with it a fresh and interesting idea that keeps you plugging and urges you to play more. One minute you’re swinging from vine to treacherous vine like a limbless Donkey Kong, the next you’re tearing through a lava-filled castle to the rhythm-esque platforming beats of Ram Jam’s ‘Black Betty’, booming out like a gramophone from hell.

In most levels there are ten Teensies (little blue creatures with an abnormally large protuberance) to collect, along with 600 lums to achieve the coveted gold award. These are spread across several worlds and dozens of levels. There’s certainly a lot of content to be found, particularly because 40 levels from Origins are also unlockable through the scratchcard system, so you can relive your not-so-old memories of 2011.

Everything in this game is geared towards unlockables and progression; every time you finish a level some new oddity is found or scratchcard can be used to find something else to play with. It’s all tangled up in layers of intricacy but somehow it all makes sense. You’ll be itching to collect everything possible so you can unlock all there is to see and do.

When it comes to all that you can see, there really isn’t much else out there that can hold a candle to it. The hand-drawn environments look stunning on every scale. Ubisoft Montpellier have taken Origins aesthetics and injected it with an unbelievable level of creativity, pushing the boundaries of what to expect from this team. It’s wonderfully crafted and terrifically charming, bubbling to the brim with personality; what’s not to like?

The feel of controlling Rayman is great, he lollops along with an awkward gait that has all the marks of nightmare controls, but everything feels so tight and responsive that you will almost never get a job wrong; it really does just come down to reactions and timing, a wonderfully pure feeling from a platformer. Rayman has a real sense of momentum, like a galloping bundle of kinetic energy that is just desperate to keep moving and get to the level exit, even when he stands still he incessantly fidgets.

The game pits itself firmly in the challenging category rather than being distinctly hard; the more of a perfectionist you attempt to be, the harder you will make it for yourself. Overall it’s a great challenge that won’t have you pulling your hair and often just lets you go along for the ride.

If you get a chance to play the multiplayer it really is worth a go, the game plays like a charm even with multiple people causing havoc on screen. In comparison to some other multiplayer platformers out there it’s an absolute breeze, you don’t make contact with one another except the obligatory slap moves. Depending on which version you have, you’ll have all sorts of different options open to you, so be sure to grab a few extra controllers to share the fun.

Rayman has spent so long in Mario’s shadow he makes Luigi look like a superstar; but this time once and for all Rayman can declare himself the platforming king, leaving the Mario bros to play catch up.

I always like to squeeze a few negatives into a review, truth be told they’re my favourite bit, but i really am struggling with this game. If you steadfastly don’t like platform games then maybe, just maybe, this isn’t the one for you, but for everyone else, what are you waiting for?

Now I’m going to go out on a limb and say that Rayman Legends is one of the finest platforming experiences you will play this year, possibly this decade. I’ll keep things simple; go buy it.

i totally agree with this review. i have played 40+ hours of this game and i can confirm it is fantastic! well worth the 9.5 score and the 30 euros i paid for it! congatulations to the developers for this masterpiece!

yeah it was great game.

Not happy about it having U-Play but the demo was incredible and I therefore want this game badly. The 360 pad I currently have is awful for platformers so I want to wait until I get the PS4 and use its controller to play Legends on the PC. No point in paying $30 for another wired Logitech at this time. I'd buy it for my PS3 but it's going out the door to make room for the PS4 and it's $20 more. How can you not love a game that has an homage to Ram Jam's "Black Betty"?

Sweet! With this game and the Jak & Daxter Trilogy now available for free (PS Plus), my platforming thirst is quenched :D

this game is definitely cool! I already played it for an hour and all I can say is WOW! GORGEOUS!

definitely getting this, like a journey back through time