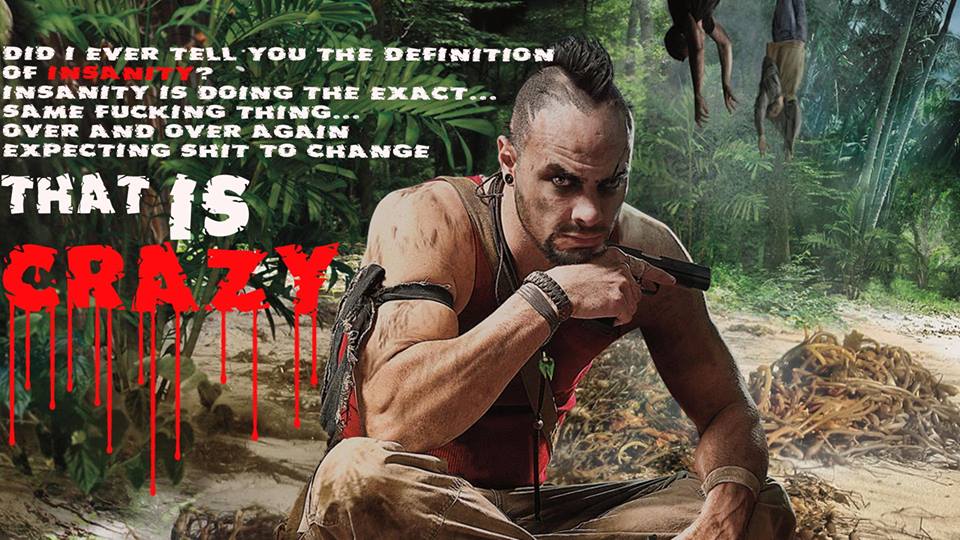 The Definition of Insanity

Far cry 3 is an amazing open world first person shooter game with action-adventure theme, this game is released on 29th of November 2012 by "Ubisoft Games" for PC's and consoles like PS3 and Xbox360. This game is based on an island and the main character of the game is "Jason Brody". Far cry 3 also contains a DLC named "Far Cry 3: Blood Dragon" released on 30th of April, 2013.

The game is consisted on a number of quests i.e side missions, hunting, collecting and the great story missions. the game also supports skills upgrading and crafting system which gives the game a delightful look. In this game, the player has also the ability to play stealth game, the player can silently takedown enemies with his sharp knife or a gun with sound suppressor without being seen by sitting behind covers or underwater, the player has also the ability to tag enemies with his camera for his easiness. The crafting system can be used by collecting plants of different types and by collecting skins of different animals, on the other hand, skills can be upgraded after gaining enough XP by killing enemies or completing different types of missions and quests. The game also contains an inturestting thing that after every upgrade we receive a cool Tatoo, Sorry not tatoo its TATAU :P

The game has an attractive story, the game starts with a cinematic in which our main character "Jason Brody" is celebrating with his friends for the pilot licence his little brother "Riley" just got. In the vacations, our group of friends plan to go to an island to enjoy the vacation. when we reach the island, we came to know that the island is under the helve of "Vaas" and "Hoyt". Vaas kidnap us and all the group of our friends including "Daisy Lee,Liza Snow,Oliver Carswell,Keith Ramsy and our two brothers Grant and Riley Brody". Somehow we and our elder brother escape but then vaas kills our Elder brother in front of our eye and let us run away. Then we are saved by a man Named Dennis who tells us that we are not an ordinary man!. Dennis take us to "Citra" who is the leader of their group and then after completing Citra's wills, Citra falls in love with us told us that we are RAKYAT!

The best thing in the game is exploring island and hunting animals and the Character "Vaas" that supports great acting including voice, style and Specially haircut and dressing :P

For me the game is not less than a Masterpiece!