Hello again dear Reader in another smite review,This time around though its not in Beta and has officially released.I'll try to keep it as short as possible,Which probably means it'll be long but anywho lets get to the point shall we?

Overview:Smite is a MOBA (Multiplayer online battle arena) ,Developed by Hirezstudios which is the same company behind the Critically acclaimed games Tribes:Ascend and Global Agenda.The Game was in open Beta until early 2014.Similar to other MOBAs you must choose from a pool of characters (in this instance ,Mythological Gods and deities) and Battle other player controlled Gods. 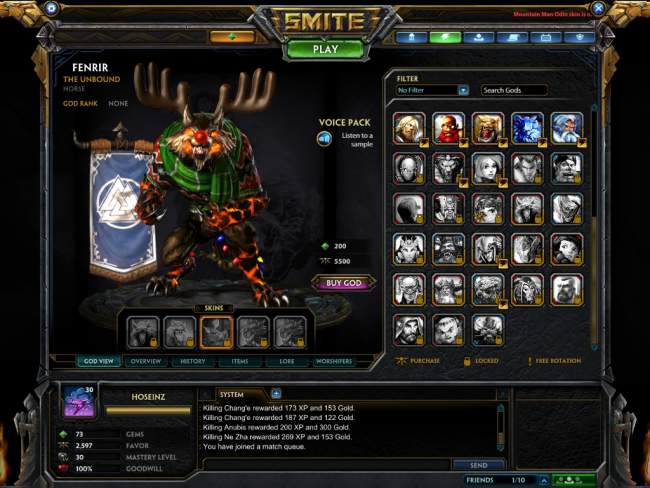 it is F2P,with 6 free Gods (which Beta players didn't get at the time) on new Accounts and 5 or 6 Gods free rotation every week.You can unlock other Gods by earning Favor through winning matches or you can buy Gems,or you can buy The Ultimate God Pack which includes all Current and future Gods.All in all, it is not considered P2W because You gain no advantage by just buying a God,You can also rent a God for 100 Favor which is really Cheap. 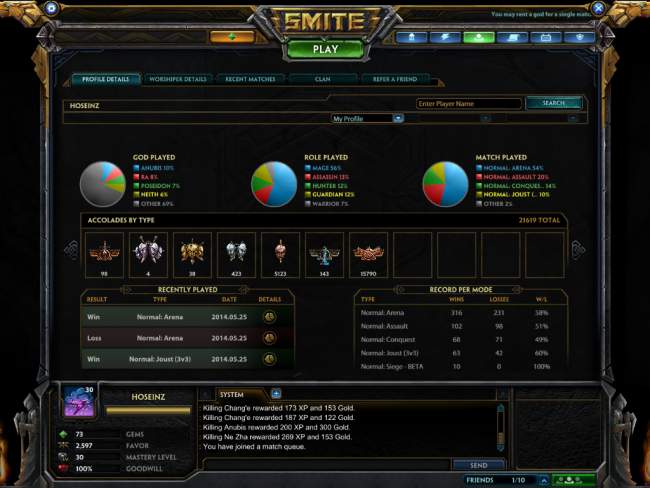 Game-play:The basic Game-play concept of Smite and Pretty much all MOBAs is kill creeps/minions,Get some farm,Get items and let the slaughter begin.there's no more of that "right click the enemy to kill",you have to aim your attacks as if you're aiming a gun,the same goes for your abilities.An Important factor that makes Smite different and More fun than most other MOBAs.

Another major difference between Smite and other MOBAs,where as other MOBAs have a Top-down isometric view,Smite uses a Third person over the back (No, its not over the shoulder) View that really makes it more exciting,and in general,More Fun

Of course there are different Roles,For example, the Carry,well Carries the team to victory with his/her buffed up, sexy oiled back back full of shiny Expensive items.Tanks ...uhh... Tank stuff and Supports,who in my opinion are the most important Characters of MOBAs.They can make or break a game just by buying a ward,Or a proper heal in time of need.You never know,The Carry might end up carrying the Team while being support-carried by the Support in the same time. (think about it a bit)

There are currently 53 playable Gods in the game,Taken from Norse, Greek, Egyptian, Mayan, Chinese and Hindu pantheons.

There are different Match modes available,The main one being Conquest which is your traditional 5v5 3 lane map.The other Match types are:

Arena:All out team death match,with creeps affecting the score if they go through the enemy's portal,so basically its Team death match meets tower defense.....Without the towers. 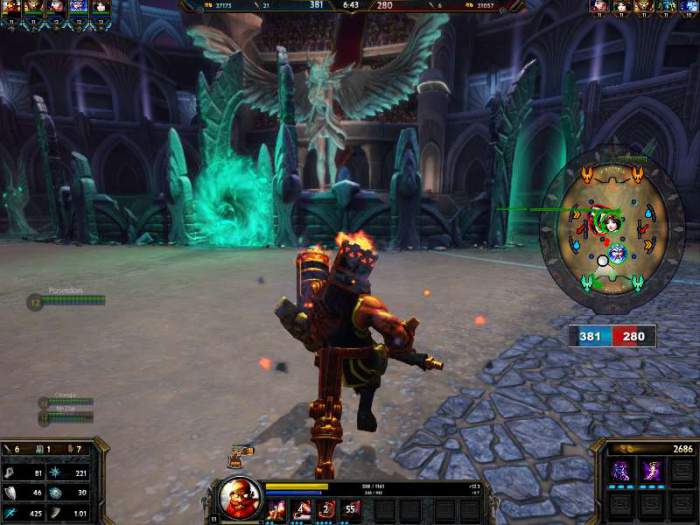 joust 3v3:1 lane,3 Players on each Team,3 towers and 1 Titan (the being you have to kill to win).There's a Jungle on bot the right and left side for Those who are feeling the need for an adventure beyond the planes of mere Men...Or people who just want to get damage Buffs.

Joust 1v1:This might come as a bit of a shock but,This match type is actually exactly like Joust 3v3,but its 1v1 (i hope you survived the bombshell)

Assault:Think of it as a 5v5 joust,except there's no jungle and you cant get back to your fountain (the place where you spawn and buy items) after you've left it.also all Gods in this match type are randomly assigned,Which is why this Match is my least favorite out of the bunch.lets just say that bad luck Bryan gets better gods in this match than me.

MotD:Short for match of the day.Its exactly what it sounds like ,the match of the day,every day there's a random and usually crazy special match type ,Ranging from Mirror matches where everyone picks Ares or loki (the map is usually empty because everyone goes invisible) To all tank assault matches, to 1000000 gold level 20 conquest.MotD is usually very Fun to play.

Siege BETA:This match type is still new and is in Beta (it says so in the name anyways),its similar to conquest but instead of having 3 lanes it has 2,and for every 100 points (you get points for killing creeps Gods etc) a siege Tower will spawn.What the  Siege Tower does is that it does HUGE damage to the enemy towers ,So if left undefended a single siege tower can take down a tower and bring a second one to half health.

Story: it all starts with a single human being,a man defying the will of mighty Zeus,he plans to bring an end to the reign of Gods on men,he wishes humans to live as they please,answer to no one.The man Travels the world,asking people of all nations to join him in his fight.and as the day of the War nears,all thats left to......ugghhh day dreaming again,yeah theres no story here.you didn't REALLY expect a story did you?

Graphics:The game uses the I'm-so-old-my-birthday-cake-looks-like-a-forest-fire Engine,AKA Unreal Engine 3.while it is an Old engine,The Game actually looks very Good,The Effects are very well done,There's not much Aliasing even on low resolutions,The game WILL have a DX11 mode with DDoF and HBAO and MLAA but for now the DX11 is gone due to some optimization issues.The games runs well and there really isn't anything wrong with it Graphics wise.it also uses Speedtree Graphics engine which does an excellent job with the... Tree stuff and... things. 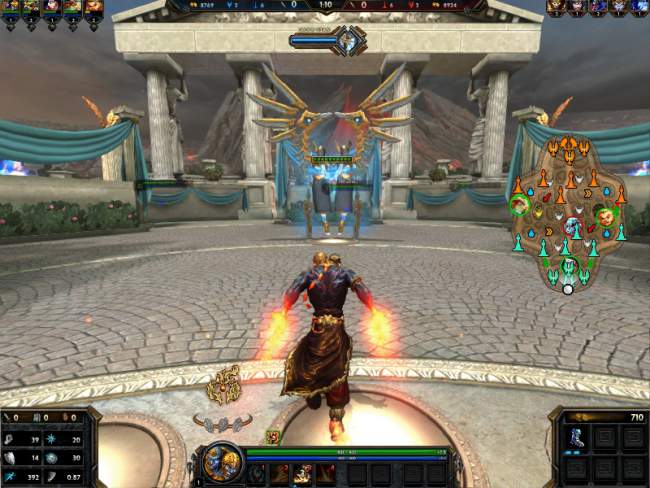 Community: By far the best community of any MOBA currently existing,The Smite Players are really nice People,no intentional feeding,no "mid or feed" and no "Noob *insert reason* report" (yes I'm talking to you League of legends,get your shit together).I've made quite a lot of long term friends on Smite that i still enjoy being with (virtually).

All in all Smite is a very good game that doesn't fall short in any way.It has a Great Studio/company working on it with very friendly and hard working people trying to improve the game day and night.The support staff is also just as good (yes they DO actually reply,the support option isn't just for Trolling players).

Smite has a very gentle learning Curve and is way more forgiving Than DotA (which is for serious and committed players).With its Incredibly small Download size of 3.2 GB,I Highly recommend trying it out,you never know,you might just get hooked to it the same way Microsoft got hooked to being A-holes.

Thanks For reading. Hos

(PS: images might not look very good since they were captured on 800x600 and then compressed and resized due to upload limit.)