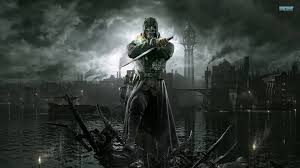 Dishonored: a Game That Deserves Some Honors

Written by 4gateftw on Fri, Jun 5, 2015 12:48 AM
Dishonored
Where does Dishonored rank in the list of the most demanding games?
100+
Rate this game User Rating
What's your user review score for Dishonored?
8.96
Ok Not Ok Optimisation
How well optimised is Dishonored for PC? 9.7
9.7

The stealth genre seems to be on the decline as of late. That's not to say, of course, that there aren't good stealth games coming out; there are still games like Invisible Inc., Mark of the Ninja, Gunpoint, and other indie titles that take the idea of stealth and mix it with a side scroller or a turn based tactics game. And that's also not to say that games like Far Cry 4 or Batman, or even to a lesser degree Assassin's Creed don't implement elegant little stealth systems of their own into larger titles. I'm more getting at the classic stealth em up; games that encourage you to play stealthily, and punish you, though not with a game over screen, if you mess the stealth up. Games like that are much rarer these days. Only a few, like Hitman Absolution, Thief, or Deus Ex: Human Revolution come to mind. Most of these are reboots of older franchises that are largely lesser versions of their predecessors (Human Revolution excluded.) Dishonored, however, is another of these modern stealth games, and it's actually it's own IP. It's also one of the most badass games I've had the pleasure of playing, though not without it's flaws.

Dishonored is, as you may have worked out by now, a first-person stealth action game. It was developed by Arkane Studios and published by Bethesda. The premise of the game is that you are the royal bodyguard of the empress of Dunwall, a big city that's currently being affected by a horrible plague that turns people into weepers (weepers are basically extremely unhappy zombies.) Within the first ten minutes, your empress is attacked by super natural assassins of unknown identity, her only heir kidnapped, and you are framed for it. The game focuses on you getting some mystical powers of your own, and going after the corrupt politicians who framed you, which takes you through various locations in Dunwall, tracking them down and killing them (or not) in retaliation for ruining your life.

The Plot and the World

Dishonored's plot is not it's strong-point. It's a bog-standard revenge plot with bog-standard characters and a protagonist who doesn't talk. I guarantee that if you've seen any movie, read any book, or played any game that does this sort of revenge plot in a political backdrop with mystical undertones thing, you will not be surprised by anything that happens in this game. What's worse is that the writing is merely passable. As a result, the characters themselves are extremely predictable in how they act and pretty much everything they do. You won't really like any of them, although granted you won't dislike many of them either. Most of them are just forgettable. Bottom line, if you can't enjoy a game without a strong plot, you won't much care for Dishonored.

The world on the other hand, is a different story. The devs really nailed everything about it. I found myself eagerly reading through all the information I could find about the world, things like how the overseers, a secretive organization you conflict with in the game, find their recruits, or how an inventor named Sokolov, who produces most of the health potions you use in the game, rose to prominence. I even found the stuff about the process of whaling to be interesting. It's all very convincingly written, and I think the great world really helps to make up for the lack luster plot.

You can't talk about the world in Dishonored without talking about the visuals; part of the reason I found all that lore compelling was because of how good the art direction in this game is. It basically looks like Victorian England, but with all these cool steampunk gadgets and stuff, mixed in with a dash of occult themes. It all looks fantastic and cool, conveying a very dark feeling of an advanced world for it's time being pulled down by dark forces. All of this should come as no surprise of course; the art direction for Dishonored was handled by Viktor Antonov, who handled Half Life 2's art as well. All of this is complemented by a very pretty and well done sort of watercolor style. All in all, the art here is fantastic.

Sadly, Dishonored is not a great looking game in terms of the technical aspects. That watercolor style pretty much just makes up for fairly mediocre textures and model quality. In 2012, when this game was released, much better looking games were certainly coming out. And once again, the watercolor prevents the game from doing a disservice to the art, but the graphics are still somewhat disappointing.

As much as I love the world design in Dishonored, the gameplay is what stands out the most, and allows the game to be great. Dishonored's gameplay is very similar to Deus Ex in that it's a first person stealth action game. The two games are also very similar in that neither one really forces you to do anything in terms of how you play; Dishonored encourages the player to be very stealthy, but it also allows you to walk in, steampunk guns blazing, and brutally murder everyone in the room. Alternatively, you could be a pacifist, knocking out everyone by either choking them out or hitting them with sleeping darts. You could even just walk right by your opponents, not harming them in any way. There's even a degree of choice involved in the story; the game factors in how many people you kill, and changes the game world according to that number. Players who kill more people will have to deal with more packs of flesh-eating rats, and more weepers. The ending and the last level will also change. This all really adds to the replayability, warranting at least a second playthrough, in my opinion.

That choice is what makes the game unique, but it would be nothing if the game wasn't fun to play. Fortunately, Dishonored does not disappoint in that regard. Stealth is fun, tense, and satisfying. There's a variety of ways to eliminate your foes, from stabbing them in the neck with your sword, to using an awesome steampunk trap that kill your opponent with spikes when they walk over it. Even the combat, which the game discourages you from partaking in, is actually quite satisfying. There's an elegant little swordplay system in place, the gun feels satisfying, and there are fun gadgets to use in combat as well, like a crossbow that fires exploding arrows. The powers are generally pretty interesting as well. They aid you in most things from combat, to stealth, to even a teleport to aid in navigation. And navigation is rather important. The game throws you into vast levels, full of secrets, and even some sidequests to keep you interested. Some of the levels reminded me of the big hub levels like Battery Park from the original Deus Ex in their scale and open-ended nature. All of this stuff combined with the choice forms a satisfying and fun experience that will make you feel awesome playing it.

Sadly, all this is not to say that the game is devoid of flaws. One of the biggest problems the game has is a lack of difficulty. Especially on the normal difficulty, the enemy AI is kind of stupid. They have a lack of peripheral vision, and in combat they act pretty stupid. This is sort of solved on hard mode, but even then, combat is still easy as all hell, and anyone experienced with stealth games will still find little challenge to the stealth. I found that to be somewhat disappointing, as I think the lack of difficulty really takes away from how tense the game is, especially later on. After all, what does it really matter if you mess the stealth up, you're still very unlikely to die. It's very disappointing to me, and I think any fan of games like Deus Ex will find it disappointing as well.

All in all, I think the difficulty does not take away the enjoyment. You can still really enjoy just being an awesome dude with mystical powers, and the sidequests and secrets do keep you invested.

Dishonored seems to run pretty well. My R9 290 gets constant 60 FPS on full ultra, as it should considering this game is not that great looking in terms of the technical stuff. There are some options to tweak, though not as many as I'd like, and you can put the field of view up to 110, which is great for people with bigger monitors.

Dishonored is a wonderful, nostalgic, and beautiful homage to games like Deus Ex, even if it doesn't quite replicate the complexity and difficulty of those sorts of games. It's got a great world, and it keeps you going despite a mediocre plot. I should also mention that if you want more dishonored, the two expansions released for the game, The Knife of Dunwall and The Brigmore Witches, are supposedly awesome. You can buy the game alone on Steam for $20, and the game of the year edition, which includes all the aforementioned DLC, for $30. I can't recommend it enough, in spite of it's flaws.

Thank you guys for reading. If you enjoyed the review or found it helpful, be sure to click the like button, and if you didn't, feel free to leave a comment to tell me why not. I welcome all feedback. Thanks again for reading, and happy gaming!