Hi, so i was bored and I decided to write this Review, Hoping you like it.

Let me start off by saying, I hated the previous Witcher.I found it extremely dull, Lacking in every aspect. The Game-play was boring, didn't care for the Story or the characters ,Graphics were annoying to look at,it looked very Cell-shaded ish. You get the idea.but for some Reason i decided to Give the series 1 last Chance.Let us see if it deserved it , shall we? oh and i still haven't finished it yet.

Plot: So you play as Geralt of Rivia ,Butcher of something, White Wolf. blah blah blah, so there's this one Girl and some bad guys are after her,and she's like a daughter to you, And there's a scene when she is a kid , And you dream about her getting killed and then you wake up in the middle of nowhere with some Guy, All very emotional stuff,Then You step in the shoes of Sherlock Holmes as you go Town to Town looking for clues on where she went.

In all seriousness it has had a decent impression thus far,certainly better than Dragon age inquisition's story.i Actually care about Ciri (the girl I was talking about), To some extent. The Wild hunt is after her, As she Has Elder blood and is able to travel between plains, Through space and time. All you need to know is that there's a Damsel in distress, and You play as the Knight in shiny armor. A commonly recurring theme in the Gaming industry.

Game-Play: Typical Game-play really.You got Swords, Crossbows, and 5 Magical signs at your disposal.

Igni,as the name might imply,sets fire to a cone in font of you. Quen Is a shield that blocks a certain number of attacks,and the other 3 do stuff too, Though there is hardly any use for them in-game, There's one that acts like Austin Powers' hypnotic abilities , Influencing that targets' minds. Usually useful in conversations with Guards.

The swords are pretty Standard,There is Alchemy ,in which you can create potions and oils of...various uses.

And then there is Crafting, In which you can Craft Armor and weapons.

The World: The world of Witcher is Lush and vibrant. beautiful trees, Flowers and deadly creatures all around,help it feel nice,and makes wandering hither and yon quite enjoyable...for some time. Even if it is without purpose.it has a day-night cycle, Quite similar to Far Cry 2's. You can Meditate which regenerates your health, And advances time. It Also refills your consumable potions, If you have strong Alcohol.

I've encountered around 5 or 6 enemy types so far,which is slightly disappointing for me.but then again there a bazillion creature (NPCs and what not) in the game, So who cares.

The Graphics: It definitely has Graphics,and considering I don't meet even the Low requirements ,it runs pretty good,with almost every maxed out at 768p and no Hairworks with around 35 FPS.The environments look very good , Though not nearly as good as Frostbyte 3 engine. Characters are detailed BUT with 1 very annoying catch. 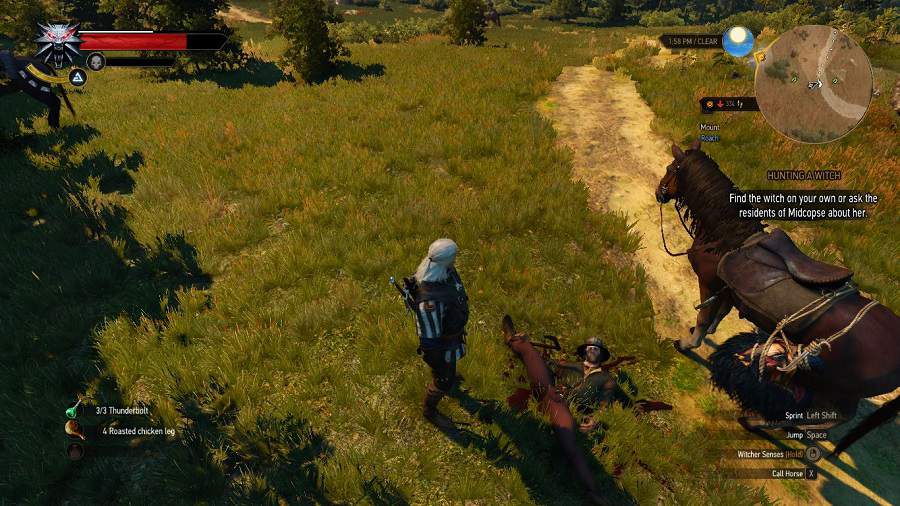 NPCs. There are probably 4 facial structures in the entire game,and they belong to ALL the NPCs. Most differ in either the hair color, One has a hat or something, Another has a slightly different beard, But every time you see an NPC you think, I've seen this guy before.The main characters are however,detailed. but again,not as detailed as Frostbyte 3 in Battlefield 4.

Audio and Voice-over: The voice overs are Generally well made, with a couple of exceptions. There is a certain female character in game that is a bard. And some point through the game, She goes on stage and sings, And in between every verse , when she is supposed to go to the next verse you can hear a sound, Clearly showing where the previous recording was stopped, and the next begins, making it feel like a cheap sound production.

most other times though,it is done very well.

Geralt: Now, There is one thing in The Witcher series that I blatantly hate.The depiction of Geralt and the Way Women Act around him. This is a completely personal view and is in no way representative of the vast majority of Gamers. Geralt is generally depicted as a Badass, which isn't bad on it's own, But Women tend to grow a severe allergy to clothes around him, so Severe in fact, That the only known cure is to lose their clothes in their entirety. And Geralt as the saint he is, Never even thinks about abusing that fact. Ever!

now you might say that's not really a big deal, but it is to me, it makes me quite uncomfortable.and is probably one of the few example of sexism in games that i acknowledge.

Conclusion: I Feel like the game suffers the same illness The last of us suffered,good narrative and all,but it's not very game-ish. I've reached a point in my gaming life where i just don't care about Graphics and Story anymore, It needs to be Fun, After that who cares. If you had asked me a year ago if the Witcher 3 is a Great game, I would've Absolutely said yes.but right now all i say is, It's a Good game.

Thank you for reading.

oh and Yes, that was a Click-bait title, so what. Sue me.

Anybody hates the fuc.king horse in the game,and the way he spawns and controls?