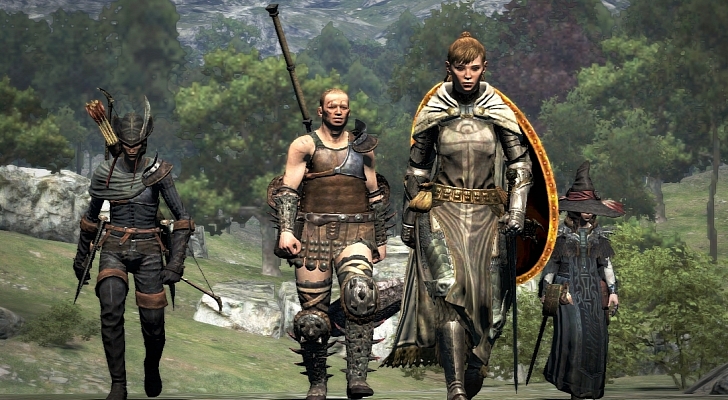 There haven't many RPG's in the past couple of years. At least not ones that are really typical for their genre, with swords, maces and other types of weapons and giant monsters that you have to face throughout the game. Dragon's Dogma is an ambitious action-RPG with a great comabat system that can rival some of the better ones, a breathtaking adventure and a lot of technical flaws which can be overlooked throughout the gameplay. But with Dark Arisen coming out, Dragon's Dogma became a lot more attractive and fun to play this time.

With Dark Arisen coming out, Dragon's Dogma gets a whole new look upon the game as it includes the original game with a few tweaks as well as an addon to the game on a new and mysterious island called Bitterblack island. The add-on will take about 10-15 hours of your life to complete, but you shouldn't be fooled by it's starting placement as it can be reached from the beggining of the game. The content of the island is designed fo post-game players as the monsters and everything there are on a very high level. Sometimes it will even get you to become one of those peole who rage about pretty much anything and that tells you of the Bitterblack Isle's difficulty. So if you don't have an extremely high level character from the original series, you will have your work cut out for you before proceeding to Bitterblack Isle.

The new dungeon is quite an unsettling place, in the sense that it does an excellent job of giving you the feeling despair and darkness all around you. My ventures into the place were usually quite hopeful and while i was on a very high level, most of the adventures ended up with me dying before i even got to something that was supposedly hard. You really get cptivated by the darkness and the atmosphere surrounding you, and soe of the creatures can be killed with one blow which seems a bit unfair but after getting to something bigger, there is no chance of escaping in these corridors, at least out in the open you could do that. Especially if you meet Death along the way - DO NOT take him on, it NEVER turns out well, trust me.

When you actually do have a fighting chance, the real beauty of the game shines out with it's next level combat system and classes. You can stay true to the class you picked in the beginning, upgrade it, or even mix it with others, giving you a wide variety of combinations to choose from. Even throughout the game you can change the classes if you feel like the on you're playing just doesn't suit you.

The sense of adventure is what really keeps you in Dragon's Dogma. The long and winding preparations before going out, the giant monsters along the way, the challenges that you face and the variety of options that you can pick from. Even during the nightttime when you don't see anything without a light the game stays appealing. One of my favourite things in the game is that monsters that you would usually find as bosses just roam around in the wild and if you face them you have an option to climb onto them and fight them from there. That is one of the things in the combat system that you usually don't see but it is epic.

But as most of the games even Dragon's Dogma has a few of it's own flaws. The land itself is beautiful and fun to explore but the people there are a complete opposite-dull and boring. The only exception that i can make here is the ending of the game, which is really epic. Even the pawns throughout the game can sometimes get boring and annoying while pointing out obvious things but at least they keep you company and help you along the way. Another thing missing is a good way of fast travelling, in a map the size of Skyrim there are almost no possible ways of doing that. You do recieve a good amount of portcrystaly in the start but the ferrystones to port to, that is a whole different story, there are a few throughout the game, but all of them are so rare that you would almost rather walk around.

Summing it all up, Dragon's Dogma provides you with hour of very interesting gameplay. The story and sense of adventure really pull you in and don't let go until you have completed the game. After a few hours of gameplay you start overlooking the flaws of the game and find the real beauty behind it even if you die countless time - especially on Biterblack Isle. It's a game that is really worth playing.

excellent game, well worth checking out, 10/10 in my opinion