Boss fights are kind of a weird thing when you get down to it. I mean, let's take Darth Vader as an example. Back in the seventies and eighties, movie boss battles were very different to how they are today. One (admittedly awesome) starfighter pursuit and a couple of half-hearted lightsaber fights and there's your whole trilogy of boss fights. Even the rancor you could probably claim is a boss fight, sure. But my point is that two men hitting each other with glowsticks was enough for us back then.

But today? Whoa. It's a whole different landscape. If a movie ends with a boss fight and the city is still standing in any recognisable form afterwards, we'll roll our eyes at how dull it all is. We've become jaded as things get bigger and grander every year to the point where a good, old-fashioned, traditional lightsaber duel seems too boring to contemplate. 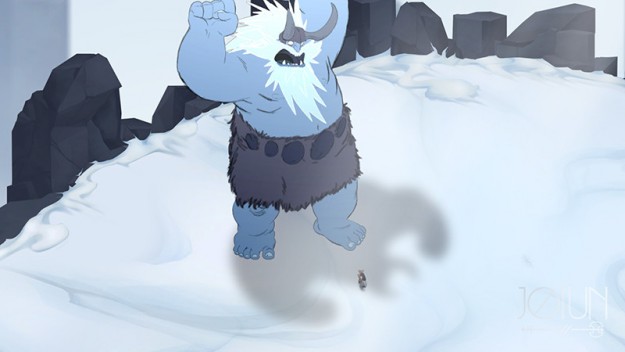 I guess these things must go in cycles though, because if you back up to the days of mythology, every battle is massive, gods fight giants, hammers create thunderstorms and everything is twenty-first-century levels of awesome. No wonder that we're seeing some of this stuff turn up in videogames now that videogames are able to handle it all with suitable grandeur.

So this is perhaps a funny way to start a review of a dinky little isometric-ish indie puzzly platformy thing like Jotun. But while the graphics are not going to leave you breathless, what they do with those graphics may well deliver more than you think. And while the majority of the game is puzzling rather than battling, the whole thing still ends up feeling like a love letter to end-of-level bosses.

Let's skip the story, sufficing only to say that you're an axe-waving viking in the norse afterlife, and you've decided to fight a bunch of giants. In order to get to these giants, though, you need to traverse a series of themed levels, solving puzzles. Being a viking, though, there is no 'interact' button. The left and right mouse buttons are 'smash with axe' and 'REALLY smash with axe', and through this method you interact with your environment, whether it be flipping switches or moving a raft across a swamp.

In all honesty, the puzzle bits are not really that tough. You may have a picture you need to recreate by hitting stuff until it resembles the accompanying picture, or a river of magma that can only be passed by smacking boulders into it to form bridges, but there's not much here to slow down anyone who's got a clue about videogames. During these levels actual fights are few and far between (excluding a level that sees you slay a hilariously massive number of dwarves), but they do serve a number of important purposes. For one, they set the scene really nicely, introducing you to some of the ideas of norse mythology that drive the story. They allow you to learn important skills that will aid you in your inevitable encounters with the giants (such as cowering near a protective blue flower every time there's poison gas around - an important skill you learn early on in the game and employ later in a boss fight). Best of all are the moments of pure atmosphere though. 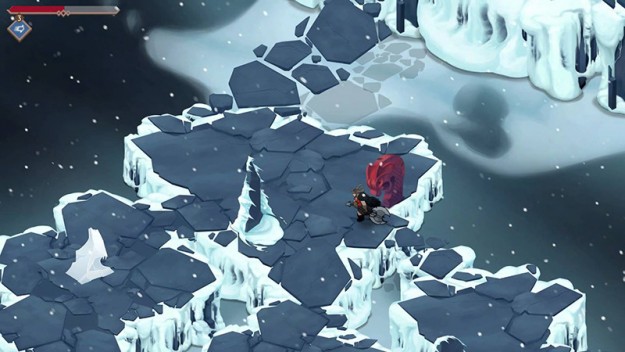 This is sort of a spoiler. If you're planning on playing the game and want to get the most out of the experience, skip this next paragraph, noting only the phrases 'shrieking in terror' and 'running for my life', and suffice to say there are a few moments in Jotun's puzzle segments that make all of the lukewarm puzzling worth it.

Those of you still reading? I just have to share this. One level takes place on a huge frozen lake, upon which you slip and slide in the manner of videogame characters since the early nineties. However, as you explore this mostly featureless expanse, a huge, ominous shape, like the shadow of an unimaginably vast eel, drifts occasionally below you. At first you're panicking, trying to get out of the way, but after about the fifth time you get it. It's a nice little touch to build atmosphere. Or is it? Suddenly, out of nowhere, what's that circular shadow beneath the ice? Beneath me? Why is it getting bigger? And are those... eyes? It's the... IT'S COMING STRAIGHT UP TOWARD ME! A small sound of concern in my throat grew to a moan and, as I'm running for my life and the eel's getting closer and closer, shooting up toward the surface, I'm shrieking in terror - in genuine terror - as it bursts through the surface, appearing in all it's cartoony glory. It's rare a game provokes a truly strong emotional reaction in me, but that particular moment gave me newfound respect for Jotun.

All of this flavourful puzzling is basically the amuse-bouche before the main event, the boss fights against the Jotun themselves, the giants of Norse mythology. From the frost-rimmed giant of ice to the fire-bearded smith behemoth at his forge, to whatever the heck the freaky vegetable woman giant is supposed to be, each of the giants is a glorious celebration of end-of-level bosses. In this grand tradition you'll usually die repeatedly as you try to uncover each giant's weaknesses and patterns, noting with dismay how little damage you've managed to inflict by slicing away at their toes with your axe. Then, with time and experience, you'll learn to identify the weak moments in their attack patterns, the times when you can unleash your special Thor power and bring the smack with your heaviest attack, or the time when your special speed power allows you to move into a weak spot and slice at double normal speed for a particularly devastating flurry, and you'll be dying less frequently and doing more damage. Until the giant's at half health and, inevitably, starts a more dangerous attack pattern with all-new powers.

These enemies differ in difficulty quite dramatically. Two of them I managed to defeat on my first or second attempts, but the rest were challenging and all were enjoyable. Jotun's cartoony style really comes into its own with these enemies as well, giving each enemy distinct otherworldly personalities. 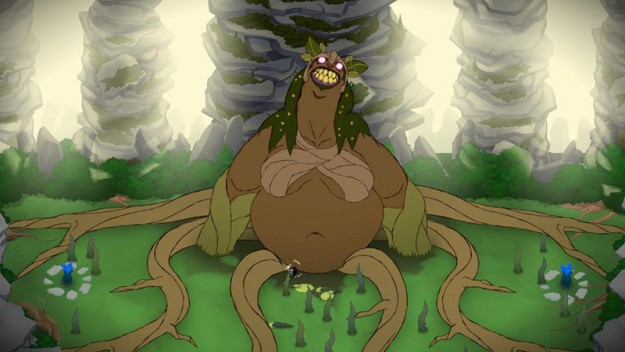 So it's a little game, but with a big heart. There is some serious love of Norse mythology - prepare for an armload of nidvellirs, ratatosks and mjolnirs. To relive that feeling in the pit of your stomach when either you and the end-of-level boss will be killed by the next stroke. Ultimately, there's nothing in Jotun that would have even been hailed as original if you'd seen it in Mickey Mouse: Castle of Illusion, but fun is timeless.

But... wasnt a review for this game already published a while back?
What's different now?