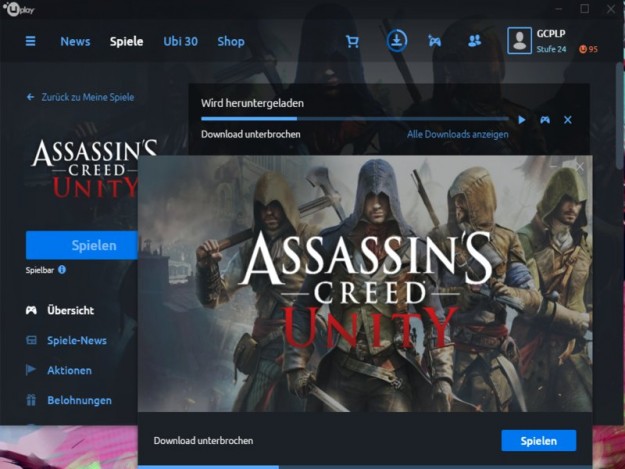 Uplay offers a feature where you can start playing the while it's still downloading. This doesn't work for every game though and will only work after a certain amount of downloaded data. With Assassin's Creed Unity, this feature works, but it's extremely limited. I will show you how it looks.

It's in german ( sorry for that), but it show the button play in the lower right corner (Spielen), but I only downloaded like a third of the game (around 15 GB).

So how far can you get into the game with 15 GB downloaded you ask? I tried and you can play the first mission, that takes like 10 minutes. At least it's something. In my opinion this is only useful if you want to tweak you graphics settings to get best framerate/qualtiy. The only problem there is that the first level is kinda dark so this won't really work in this game. This is what you will see after watching the "final" cutscene of the 15 GB preload.

Yep, it shows how far you have downloaded the game.

Note: This is the minimum playable version of the game. I don't how it would play on 50 % or more.