Like a sentient species that has newly acquired interstellar travel, the various guises of the Warhammer universe have undergone a scattering in the last few years. Morphing from the rigorously-curated Games Workshop property that only the now-fallen giant THQ was allowed to touch, Warhammer is now a (still rigorously-curated) plethora of titles spanning pretty much every genre short of football management. Oh, wait, no, there's actually one of those as well. Warhammer 40,000: Sanctus Reach is yet another of these titles, arriving with existential inevitability just as the furor around CA's Warhammer Fantasy Total War title has calmed a little.

And it's back to the grim darkness of the far future where there is only war. Once again, developer Slitherine return to this sunny setting to bring more Space Marine-on-ork violence, as they did in their previous outing, Armageddon. This time around though, things are on a slightly more intimate scale, with units representing squads or one larger unit such as a tank. Therefore the 'epic scale' mass warfare feel of Armageddon is replaced with something much more intimate. 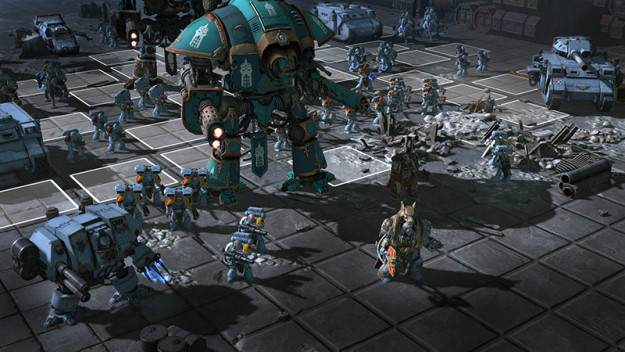 And you know with gaming, when you really boil it down, it comes to quality of life. How much fun are you having? A little lack of polish can be forgiven if the game is so much fun you barely notice the technical shortcomings. Sanctus Reach? It's most of the way there. But if you had a storm bolter to my head and I was forced to be completely honest, I'd have to admit that for the price point there are a few too many areas that are rough. Overlooked features and bad UI can take away from some of the fun.

So you're leading your intrepid Space Wolves in an assault on orkish positions. You've taken the time to position your Whirlwind armoured artillery on raised ground overlooking the battlefield, and your airships are spotting for you, allowing you to rain devastation down on the enemy. Sensing a sea change in the flow of battle, you seize the initiative and storm the enemy lines with Rhino Infantry Fighting Vehicles packed with squads of brave Space Marines. Reaching a suitable front you unload your troops... and then get bogged down in shuffling through the embarked units in order to find the ones you want to unload. Basically, this is done by disembarking everyone and then re-embarking the ones you didn't want to disembark in the first place. If you're getting fed up with me saying 'embark' and 'disembark' over and over, imagine how it feels when you're actually trying to do it in the heat of combat. 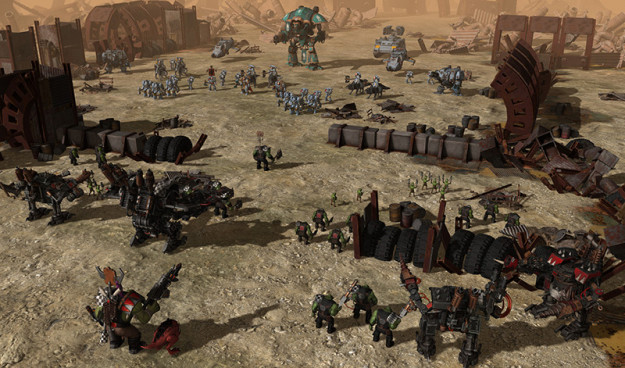 But this little annoyance doesnt put you off and you are back at it, working out how your handful of Space Marine units can possibly withstand the continuous spew of the greenskin plague. You bring your powerful dreadnaught to the flank to protect your vulnerable side. It shreds and rips their units apart. It really feels powerful, but then you know these orks are many. But you know in your gut, there are too many of them even for the brave immortal that resides within the mighty machine. But then you see your 2 bike units have still got their turn left, and they are fast enough to reach the area this turn. You speed them over to lend support, but make sure they do not get too close, yet, lest they get pulled from their metal steeds.

Meanwhile across the other side of your line you see the daft orks are piling up their wrecked machines, which is forming a barricade that you can use against their masses. You channel the enemy between their own wreckage and a hill, forcing them into a shooting gallery, where your Space Marine infantry and Multi Melta units sit waiting. Your hero with his power glove engages them in melee, blocking their primary route forcing all their units to sit and wait to get past him. They are orks though, and they shoot into their own front lines to get an occasional hit against the hero. But you know this can last a while and it will buy you all the time you need. But then your heart sinks. From the fog of war you see the huge metal monstrosity lurching forward towards this bottleneck. Gargant!

This is the sort of thing that can happen and you get a real sense of unit purpose. Put the right unit against the correct enemy and the formula works. You turn the tide like the elite Space Marines should. 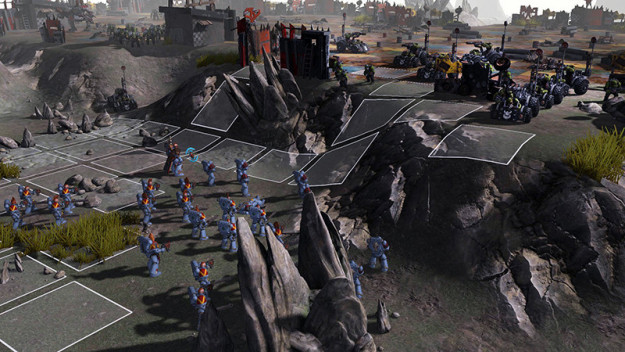 The campaign modes are, frankly, unfinished. There are blank screens where mission background text should be, and trying to navigate the menus for the campaign (including a bemusing troop levelling system) can often be more of a challenge than the battles themselves. This is by no means a deal-breaker, you understand. Once again, it feels like its just a matter of a couple more man-hours needed in the dev studio. As it stands at the moment, Sanctus Reach teeters on an unsteady precipice between Alpha build, Early Access and full release, without tidily falling into any one camp. No doubt many of these concerns can be fixed after release (and hopefully will be), but we're once again back at the question that defines this era in PC gaming: should we be buying unfinished games?

So you're probably worrying. But don't panic too much! The love that the studio feels for the setting is apparent in every design decision. Tactical options abound, and while I moaned about it a moment ago, the ability to move troops around in Rhinos is a great tactical perk in game, despite its poor user experience implementation. While the enemy AI is less than stellar, it simulates orkish tactics well. They'll swarm your positions, and cause you all manner of problems as they engage with your recon units, pinning them down in melee combat until you can spare the reinforcements needed to free them up and limp them back to your lines. Unit variety is decent, ranging from small four-man trooper squads (occasionally led by special commanders with your usual Warhammer 40K loadouts) to Titans and Gargants. Units can move and fight, or fight and move, with niche-use fight-move-fight orders (with dramatically-reduced movement range after the attack) allowing for set-piece drive-by attacks and fighting withdrawals that favour units designed for that, like fast bike units. 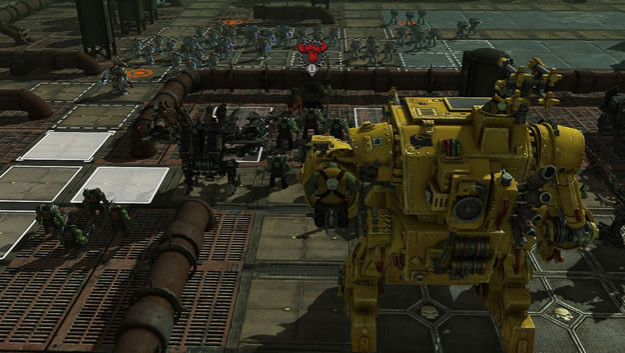 Despite the clear love of the setting that the designers have implemented, there is a decided lack of background fluff on where you are and what you're doing. This seems strange - Warhammer 40,000 started life as a straightforward sci-fi miniature wargame with a Tolkien-like attention to detail, and to focus on the game and brush over the fluff doesn't sit right at all. In fact, it feels very much like the storyline and background detail are still to be implemented. Yet another place where it maybe feels like Slitherine ran out of time.

There is still polish to be done by the devs before it's this is a refined experience, but a lot of the issues can be overlooked once you get an hour or two into the core game and you are working out how to hold a line against the waves of greenskin. Much of the central gameplay is there, and there are loads of great ideas and units to extend tactical range. I feel more patches are in bound, with a new one out today to accompany Sanctus Reache's release date.

With Sanctus Reach, Slitherine are just now starting to show what they are really capable of in the sci-fi strategy arena and I look forward to seeing how this Warhammer 40K partnership turns out over the coming years.

Ultimately, this is the thing - Sanctus Reach is a cool and fun turn-based 3D wargame that fans of Warhammer 40K will no doubt lap up. I had a lot of fun with it and I'm certainly going to be stepping back into our dark human future for more.