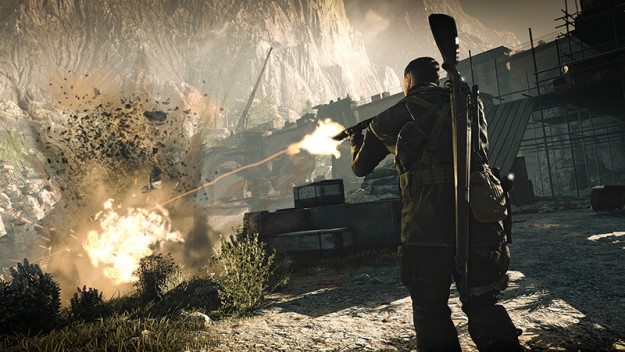 Good crikey. How can I write a review for Sniper Elite 4? There are major problems.

Not problems with the game, you understand. It's Sniper Elite III transported across the Mediterranean to Italy, with a new bunch of friendly resistance members to buddy up with, and a new evil German whose villainous plans need a-thwartin'. But other than that? Really? Go read the Sniper Elite III review.

Which is kind of a good thing. Because I rightly loved Sniper Elite III, and it was a joy to return to the rough-and-tumble world of sloppy, noisy, not at all stealthy sniping that is Squee playing Sniper Elite games.

Because that's a thing, you see. When I play Hitman, like most people trying to play Hitman in any serious way, I take my time, plan, reckon distances and spend a lot of time walking, listening and identifying safe places where I can retreat to in a contingency. But Sniper Elite? Well, it's a lot heavier on the 'Sniper' than on the 'Elite', that's for sure.

And that's because, on the whole, it's a far more forgiving experience than Hitman. The Sniper Elite series has always lived in a merry middle-ground between stealth games like Hitman and perhaps more closely Splinter Cell, and a noisy, machine gun-filled WW2 FPS.  Karl Fairburne is the same lantern-jawed, one-dimensional action hero he's always been, and the game is just as viable in large part with Thompson SMG and grenades as it is with long-range rifle. Of course, it's also fun to sneak up to a group of guards and silence them all one-by-one with the combat knife, as nature intended. Mostly, though, you'll probably combine all of the above to greater or lesser extents.

Maps remain open-plan for the most part, although a few have clearly defined paths which sometimes you have to follow. Still, the idea of a wide open area that you can explore to your heart's content, allowing you to set up a great spot, take one killer shot, then melt into the countryside to a pre-arranged secondary hide.

So as I mentioned, it's sort of forgiving. Take one loud shot, and you can usually expect to drop from sight pretty easily, maybe without even moving from your firing spot. Take three or four shots and sure, you're likely to get made by the dwindling number of survivors in range, but so long as you've tagged them with the binoculars beforehand, you'll always know where they are so setting traps and ambushes for incoming storm troopers is pretty straightforward. Some soldiers have extremely limited vision as well - you're looking them in the eye from about ten yards away and they just sort of go "Huh? What was that?" before inevitably having a shard of hot lead speared between their eyes. No matter how bad things get, you can always leg it - usually with no serious repercussions. There's plenty of opportunity for purists and perfectionists to do their thing, of course, but a casual player isn't stuck behind a difficulty wall (even at higher skill settings) that will impede progress to any great degree. In this way it's similar to Sniper: Ghost Warrior. As I've mentioned already, this is part of the series, however, and will be no surprise to long-time fans.

And the plot is also what we've come to expect. Fairburne has never really had a lot to say for himself, and while he's not afraid to mutter occasionally this time round, you'll still spend far more time listening to people talk German than English. Missions generally have central objectives that have to be completed, and then tons of different sub-quests you can take on for your OSS contact or the resistance.  Missions are never really desperately twisty or original, however - you might be trying to assassinate a particularly bad guy, or recover some supplies, or destroy a downed spy plane, but that'll pretty much be it. Nothing to curve-ball you mid-mission too much. 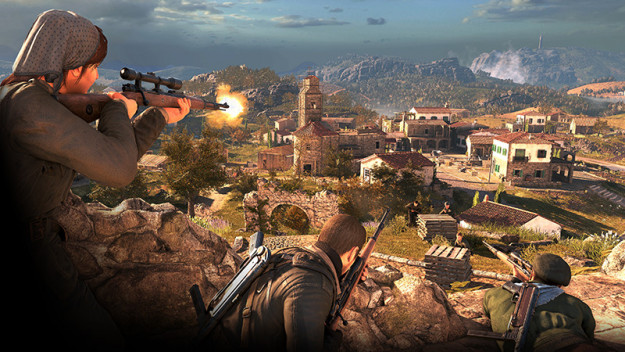 So I'm not going to talk about the kill cam because this deep into the series we've all already seen it and are either numb to it or have switched it off. But the designers are obviously aware of the strange twinge of moral discomfort it's capable of generating, because with the binoculars they've doubled down on it. When you tag soldiers, you can also uncover intel on each and every bad guy - data that can range from them having claimed to have killed many Allied prisoners to their worry that they might leave their children without a father or that they once saved an Allied airman from death. Often these will make no difference in your approach, but they add another level for the true perfectionist - now you can be judge and jury on each soldier, sparing those who you don't feel deserve a sniper's bullet. Collectible documents scattered around the levels are written by these named soldiers and add another layer to these miniature stories, all of which brings the world to life a little.

So how to conclude? Well, it's another Sniper Elite game. Much like number three, which admittedly took some major steps forward over V2, but the same level of progress is missing. A new climate and a lick of paint have made another game in practically the precise mould of the brilliant Sniper Elite III, so I can't really complain. It's like going back to your favourite restaurant and ordering what you always order. Sure, it's a bloody delight, and there's not much bad to say about it, but perhaps something slightly different (aware as I am that this is vague and ill-defined) might have been nice?

How are you finding Deathloop so far?

Deathloop developers are investigating stuttering on PC, and its probably not because of DRM

“Thats simply damage control, they goofed so obviously they will say its not true now” - 30011887

“Step 1 - Remove Denuvo Step 2 - Let's not screw over our most supportive customer base which is PC.” - PhenomFaz

Great review. i love the favorite restaurant analogy. I think while it does everything that Sniper elite game should do, something new is required to push this game further. The score and analogy represent that perfectly: it's great, but nothing mind-blowing... nothing that would make me excited to talk about.

Thanks for your kind words! Glad you enjoyed the review.

Innovation shouldn't be a Con. That's what defines the Sniper Elite games.

No Innovation defines Sniper Elite? or am I understanding this wrong?

I don't get it either lol. Did you see the 'No' in front of innovation?

Perhaps the poster was saying that new innovations would dilute the core "Sniper Eliteyness" of the game, and in large part I think that's a viable opinion, and one which I'd struggle with really disagreeing with. It's a fun game (hence the relatively high mark), but it is happy to remain in safe territory with regard to its core idea. I tried to make that clear in the review itself, the pros and cons are just summaries of the points covered in the review.