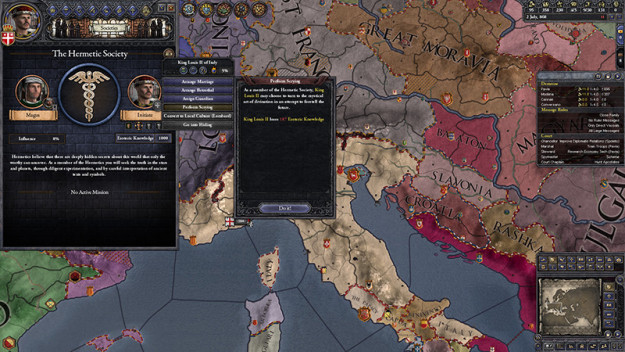 Five years! It might not seem a long time in the grand scheme of things but in the fast-moving world of videogames, it's a lifetime. If a successful game doesn't have a sequel in the works in five years, people start to get antsy. Both Dishonored games have come out since Crusader Kings 2 was released, and they're still bringing out new content for it.   This tells us a couple of interesting things. Of course, it's a testament to the sheer love that the Paradox devs have for their own games, and to the potential success of a model whereby a game is lavished with love over a period of years rather than rushed to market and forgotten. But from the perspective of a reviewer, it really means we can stop talking about probably the one main complaint that people had about CK2, and that's the steep learning curve. True, it's a complex beast, but if you can't get the hang of it in the length of time that many people can do a PhD, you're probably not interested in the twelfth DLC pack for said game anyway.

Which leaves us. You and me. The Crusader Kings 2 fans... is addicts too harsh a term? Zealots? Suffice to say, this is a game that has garnered some serious fans over the years, and I count myself proudly among the faithful. Getting the chance to review a new DLC for CK2 is always a pleasure, even if for no other reason than that it allows me to immerse myself back into the core game.

So, then. Twelfth expansion! Even more if you count Sunset Invasion and the ruler designer. Let me make my main point right now: Crusader Kings 2 expansions work best as components of a complex whole. Let me explain. So the big new thing with Monks and Mystics is the introduction of societies - from monastic orders to the brotherhood of alchemists to dark cults of demon-worshippers, there are new and interesting gangs of oddballs to which your character can dedicate his life. But if you add a scoop of The Old Gods, your viking leader has Hel Worship as a new society to fraternise with, and Sword of Islam lets you play a muslim leader who becomes seduced with the Brotherhood of Assassins and all their hiding-in-hay-cart shenanigans.    I have the Way of Life DLC, so my character, a Duke of Georgia, chose the scholarship focus. Not really a learned man, he wanted to do something useful with his latter years. Anyway, one thing led to another as it often does, and I'm handing over a bag of shekels somewhere in Persia for a copy of the Necronomicon. Suddenly, my learning is boosted to over ten, and I now qualify for membership of the Hermetic Order - the society of astrologers and alchemists.

This intersection of two different expansions adds new dimensions to the storytelling that couldn't really be achieved alone. I guess that's what bluetooth-microphone-wearing marketing execs call 'synergy'.   Because that's important. Essentially, the beauty of Crusader Kings 2 is that it's a story generator. Anything that adds a new facet to the already-rich stories that CK2 can endlessly generate is a good thing, and with each seamlessly-tesselating expansion, the stories get more and more complicated. My budding alchemist is also fighting off Seljuk Turks and vying to tip the scales of power with the king of Georgia - but now he's spending all of his time and money up to the armpits in alembics, writing a treatise on dilution and occasionally contacting divine entities through the use of quicksilver, does he really have time to rule a duchy effectively? Can the region survive and prosper when the ruler is spending all of the money on a new library and gallivanting off to the ends of the earth in search of tablets of forgotten lore?

First time around, these societies are really fun for the reasons I've just explained. But ultimately the number of quest lines and decisions that key off each society are pretty limited, and eventually you'll start to see through them. This is the ultimate ironic tragedy of immersion in Crusader Kings 2. When you first pick the game up, it's an impenetrable wall of figures and information. Then, as you start to learn the game, these number fall away, Matrix-like, to reveal a rich tapestry of storytelling that enchants and engrosses. Then, inexorably, once a level of expertise is aquired and the decisions have been fully explored, the story falls away to once again reveal the numbers and mechanics behind the scenes. The best remedy for this is more and more plotlines, and while that's something that Monks and Mystics does add, it could perhaps have done with more.

Still, there are other fun things that can be done with the new societies system to keep you going. As you progress through the hierarchy of an organisation, you'll learn certain skills and powers - as an alchemist for example, you may be able to create a horoscope for your children or scry the future for yourself - and while some of these veer away from historical accuracy and into the realm of fantasy (something Way of Life was guilty of as well, of course), they can be very fun, and often easily explained as delusion rather than any real magical happenings. 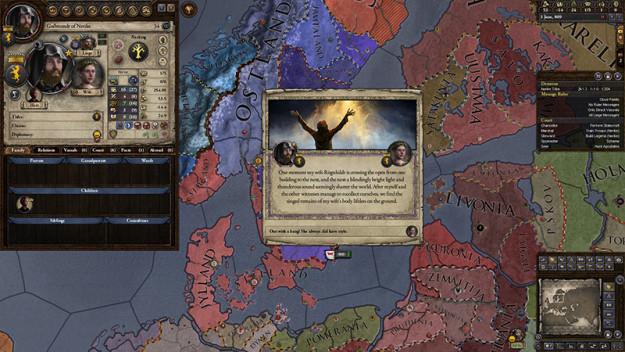 Outside of societies, Paradox have made a few tweaks to advisors as well, giving them passive roles that can be used to keep them busy when they have nothing else to do (not that this was really a problem that needed fixing, as there were already jobs for that). As is usual, there's a free update for the game regardless of whether you buy the new expansion or not, filled with the usual whimsy of a grand strategy update (things like meddling mothers who no longer seduce themselves).    Monks and Mystics serves the 'average' Crusader Kings player well, intersecting with all styles of play and interests in a way more similar to Way of Life than, say, Rajas of India. Adding depth to characters throughout the world is always welcome, and while the concrete plotlines themselves might be a little thin, the new dimensions and allegiances that can affect the unscripted procedural stories are always welcome. Great job as usual, Paradox.

Why does this article takes up half of my news feed space? O_o

was the whole review meant to be fully readable from the home page?

I have the same question, require answer please

No it wasn't meant that way. Will be fixed soon.