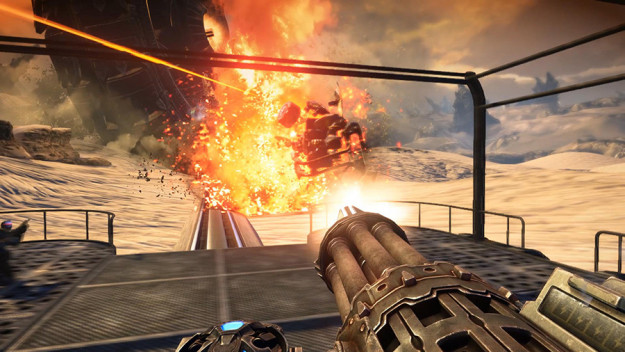 Bulletstorm: Full Clip Edition is probably the biggest rip off since Freddos became 30p. At $50, publisher Gearbox is treating the customer like a fool. That’s no cheaper than the original Bulletstorm launched for on Games For Windows Live way back in 2011, and it’s got nothing to show for it aside from some higher resolution textures and Steam integration. Bulletstorm: Full Clip Edition has come out at a time where it sits alongside the likes of Nier Automata in the Steam storefront, and it looks like nothing less than a laughing stock. At this point I’d sooner spend $50 on a Big Mac meal than an up-rezzed version of Bulletstorm. Under no circumstances do I recommend you buy this game for the MSRP. It’s heavy discount or bust for Bulletstorm: Full Clip Edition.

But enough about the price, what about the game? If you played the original Bulletstorm, you know precisely what to expect from the Full Clip Edition. This is exactly the same game with exactly the same content, aside from a DLC cameo from 2011’s biggest arsehole, Duke Nukem. It’s the same grating Bulletstorm humour, full of antagonistic one-liners and brash attitude, crammed in alongside some high quality FPS gameplay. Patience will be required to extract the joy from all the rampant braggadocio, but lurking beneath Bulletstorm: Full Clip Edition’s high school jock exterior lies a fun time that recalls old-school first-person shooter classics, while implementing its own twist thanks to the ‘Skillshot’ scoring system.

Combat in Bulletstorm: Full Clip Edition is undoubtedly its strongest asset. Drawing much inspiration from the likes of Serious Sam and Tony Hawk, Bulletstorm is fast, furious and combo-laden. With a wide variety of weapons at your disposal (including a grenade flail gun, electric whip, Boneduster quad-barreled shotgun, and the cannonball-firing Bouncer), the player can string together moves and form combos, utilising parts of the environment for outlandish kills and lining up particularly difficult shots. It rewards speed, agility, and varying your methods. That’s where the Tony Hawk’s Pro Skater element comes in, racking up high combos by pulling off several outlandish moves, chaining enemy executions together. It’s slick, it’s fun, and it’s the single strongest asset of Bulletstorm: Full Clip Edition. 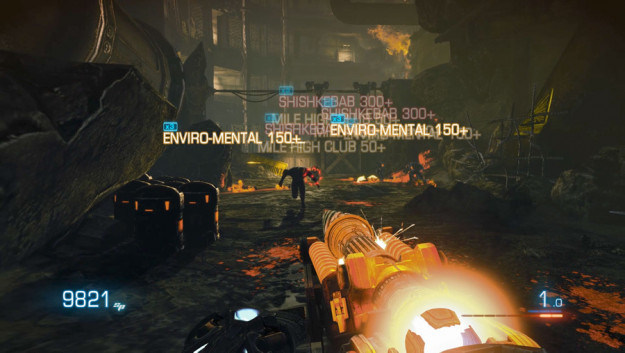 For more thoughts on the original Bulletstorm, and more in-depth details on gameplay and mechanics without treading over the same old ground, be sure to check out Rorulon’s original review on GD back in 2011.

Back to the remaster and, visually, Bulletstorm: Full Clip Edition looks decent, although a far cry from impressive. It wears its Unreal Engine 3 origins proudly, and there’s distinct shades of Gears of War to its visual style. To their credit People Can Fly do try to mix things up with the level design, although the strong elements can give way to mediocrity in a flash. The opening segment as you walk anti-grav style down a skyscraper is close to jaw-dropping. Then you head into said skyscraper and are treated to an exercise in visual tedium. Fortunately there’s enough variety tucked away inside Bulletstorm to see you through, including a massive ruined city by the seaside and some genuinely expansive views across desolate lands.

The trouble with Bulletstorm: Full Clip Edition is it’s got a list of negatives which can stand just as tall as the positives. For all its cockiness the humour is one-dimensional, the visuals bland and the campaign short. In 2017 it really doesn’t hold up too well. Whisper it, but a Painkiller remake would have made for a far more enjoyable time. 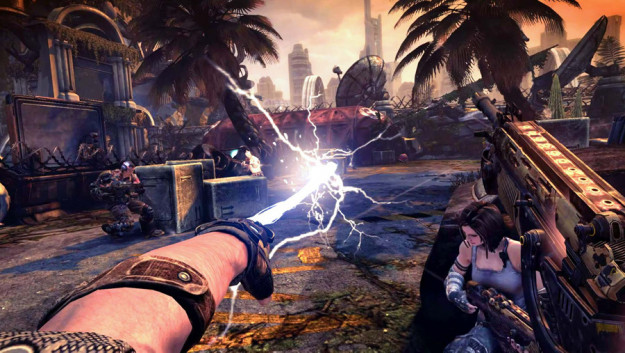 Bulletstorm always was, and still is, good for a mess around if you’re bored. But it was never going to change the world, and ultimately I couldn’t help shake the feeling I could be playing something far better. Knowing Gearbox wants to charge $50 for this probably constituted to the sour taste in my mouth, but when $50 can buy you a brand new AAA title, I struggle to see how a full-priced game from 2011 can compete. There’s very limited multiplayer, a fairly brief campaign, and the remaster does very little to justify its existence, outside of freeing itself from the shackles of GFWL.

If you’ve got the DOOM reboot then I heartily recommend you just go and play its Arcade Mode instead. This was added as a free update back in October last year, and it’s everything you want from a score-attack shooter and then some. Failing that, and if you’ve never played Bulletstorm before, then it’s worth a play-through should you spot it at a deep discount further down the line. $5-$10 should do the trick in the current market.

I feel this article is partly biased towards people who already own the game and not because of what it is, this remaster shouldn't receive much less in terms of rating as newcomers will see this game as people once saw the original.

I am talking about the game and not the DLC which not gonna lie looks pretty crap.

It's based on the fact the same game was $20 three months ago. The changes don't warrant $50 imo, and I did't think it was a great game in the first place.

I loved the original enough to want to give this a try once it came out, but really i would just like a sequel, however unlikely it may be. Sure the story was average, the humor was punk-ish, & it had its fair share of bugs upon release, but the fast-paced combat & action oriented gameplay was really good and the game could have evolved into a modest franchise, if a sequel with a better story & more polished gameplay were made. Let's hope that happens in the near future.

It's my favourite game of all time and when I heard they made a remastered I was not going to buy it because I want a 2nd game, not a remastered.