Regalia: Of Men and Monarchs Review 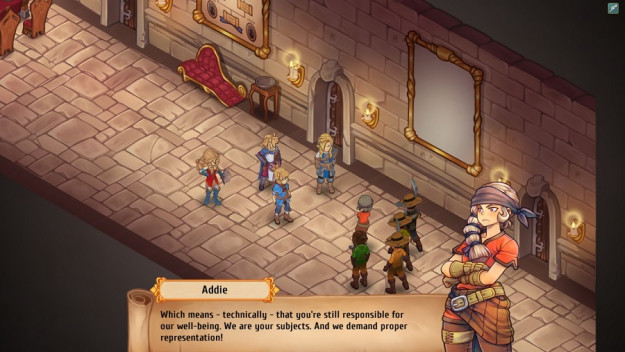 We all have had our moments and dreams about becoming ruler of all the lands. Daydreams of how our rulership would be better than the current President/Prime Minister/Monarch, who ought to pack their bags and go, letting us do the job we were born to do. But then I remember my father's saying, "Once you put on the boots, you realise what hell you are in."

Regalia is massive in scale. You have to do everything a real life King has to do. And the irony is that every leader is supposed to do these same things. But of course instead they end up spending the first two years trying to get money back into their coffers following an expensive election, the third year planning to do one of the things they promised the people if they were elected and the last two years preparing for the next election. Politics is a funny business and this sort of stuff happens in Regalia as well.

However, the scenario is a little different. The state which you have to rule is under huge debt. Something our protagonist, you, has inherited from your ancestors and isn't remotely your problem. Or at least it wasn't, until the debt collector turns up and makes it your problem. So here we are, in the city of Ascalia, which will be the capital of the Rashytil Expanse.

You are Kay and you have to clear up and rebuild the entire countryside. Since you are the only heir to the throne it is up to you to settle the outstanding debt of your family otherwise Crucey, the debt collector will not spare you. Together with your two sisters Gwendolyn and Elaine, the family Knight Griffith and a ghost of your grandfather, you will set out to restore prosperity in the region.

To guide the story along you receive bimonthly tasks from your grandfather and you have to accomplish them in order to progress. The tasks include conquering neighbouring dungeons, building Ascalia, maintaining good relations with other societies and so on. It's on a massive scale but then again this is not what makes Regalia special. It is the excellent narrative and sense of immersion the player feels through this writing.

The conversations you have with other characters can sometimes have comedic effect and can occasionally even twist events. The conversational mechanism plays out as follows: you choose a response from one of three options, and this in turn shifts your relationship with the NPC you are interacting with, depending on how close your response is to the NPC's motivations and your relationship develops with that NPC accordingly.

One incredible part of the game is Consensus. You have to make peace between two or more parties but you have to tread extremely carefully since you are the decision making party here. You have to listen to all sides and then make the decision. There has to be a minimum 70% satisfaction level for all parties otherwise it will become a bloodbath as people take to fighting to resolve their differences. Similar to brothers fighting over an inheritance. 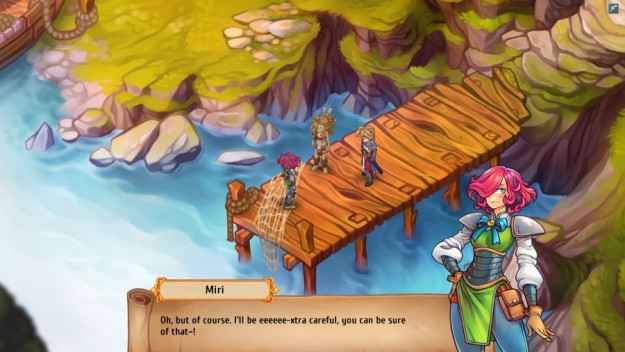 Unfortunately during the first five chapters there are very few instances of settling disputes like this.

But not everything can be settled peacefully, sometimes you just can't avoid getting into the bloodshed. The "dungeons" around Ascalia will serve as hunting grounds for resources. You have to select a party of members who will aid in your quest and fight off creatures of the wild. The combat is turn-based and each character has their own set of abilities which can be leveled up. While character abilities can be improved, a character does not learn new abilities. They are stuck with the same repetitions of Inferno, Rend and so on.

There are also text-based adventures inside the dungeons which can get you treasures or weapons and so on. You have to gather up resources to rebuild Ascalia from ashes and that is the primary goal of venturing out into the dungeons. But if one obtains new and rare weapons so shouldn't the abilities be changed in accordance with that?

And the dungeons are the place where you can manually save the game. You can't save it anywhere else which is a rather poor mechanic because you have to venture out every time you have to leave the game. Otherwise, you are back to square one, where you left off previously.

The combat, in essence, is pretty good and there is a wide mixture of strategies available to the player. The devs have also given a choice of Story mode in case you want to skip combat at some instances and remain more focused on the storyline. If you play in normal mode, then I pretty much believe you will be spending quite some time on this game unless you are a master strategist.

In the meantime, you also have to check in on your comrades. Spend a day or two with them to improve your relations and that is how you will earn their respect. And again the dialogues are involved here when your relationship is about to achieve a new status, say from Acquaintance to Friend. This will also allow you to improve individual character abilities to progress further.

All this particularly highlights the scale of the game. What it means to be a ruler and the hurdles which face one in power and the people underneath him. It's a team effort, of course, Kay's sisters will find out the history of Ascalia and do the paperwork while the boys will handle the outdoor activities.

With that being said, I would have preferred more emphasis on some parts of the game. Relationship building with Kay's comrades could use more work with some more added quests like the Pathfinder. And then you have the insane number of loading screens, not everyone has an SSD and it is particularly tiring to wait in midst of minor transfers from the castle to the main map and so on.

So in the end, Regalia is a massive game and even those who think that it isn't would agree that it can be expanded to a bigger premise. There is a lot to do and so many possibilities. It has a great narrative and its own way of telling a story of a hero who is unwillingly dragged into the mess his ancestors created.

that game is not meant to be played on PC it should be a mobile game!

I don't see any way for a game this massive to make revenue from the mobile platform. It would be too much work for people who prefer to play games for 5 to 10 minutes tops at a single instance.

yeah i know that, it's just this that genre isn't that popular on PC and i think it could had more success as a mobile game (if it was made for it in the first place)!
and for 25$ i can't see many people buying it anyway!

PC is basically the home of tactical RPGs.