So here's a thing worth considering when you sit down to play (or, I imagine, write) a new videogame. How is this game going to shoot fun into my brain? Is it going to opt for a familiar delivery method, or is part of the fun itself going to be in the originality of the missile used to launch the fun-warhead?

Originality is by no means required in order to get me to enjoy myself. I'm really looking forward to the new Call of Duty game even though I might have played one or two WW2 FPSes in my time. But without a little originality, you're going to need to answer the question 'why should I care?'

So here's Oriental Empires. A turn-based strategy game set in ancient China, a time with a period known as Three Kingdoms and the Warring States, names that sound like videogame subtitles already. Times when massive gangs of men with spears beat seven bells out of each other while sporting improbably long moustaches. It's videogame gold, and outside of Dynasty Warriors and Romance of the Three Kingdoms, there's been little to really tap this rich seam. So when a couple of ex-Creative Assembly guys decide to turn their considerable expertise and collective discerning eye on the idea, surely nothing can go wrong.

And, from the outset, there's a veneer of polish to Oriental Empires that makes you feel like you're playing a triple-A 4X game (which we in the industry obviously call a AAAXXXX). Music is evocative, maps are pretty and allow zooming in and out to almost Google Maps levels, and everything looks great. There are plenty of factions to choose from, four distinct tech trees, buildings that generate trade and allow the hiring of new soldiers... then you move your troops around the map, meeting other people, and... well, eventually fighting them. Oh, and building new cities.So if you've played Civilization, you've played a better turn-based civ-building game. If you've played Total War, you've played a better war game. Oriental Empires is what you'd call "a little from column A, a little from column B" if you were the kind of person who loves pithy little phrases.

Maps are hexy and troops fight on this said map, taking advantage of this zoom feature so that you can watch the fights at eye-level on the same map you use to found new cities and sweep over vast mountain ranges. But despite looking similar-ish to Total War battles, your input in these is pretty limited. You can choose the composition of your forces, of course, then assign them tactics individually and give them a facing, so your elite troops might be on the edge of a river, set to defend while the attacking horsemen might be charging into your flank. So there is something in the way of tactics, but it's barely there at all really. 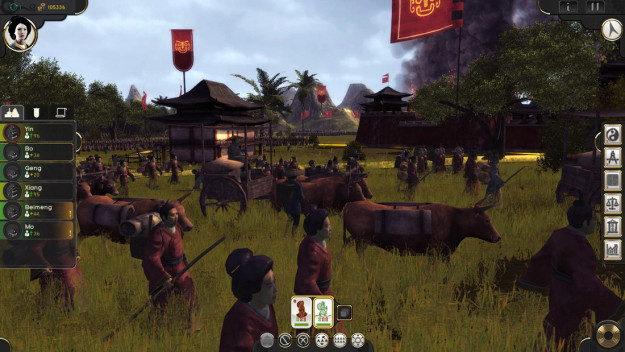 Cities can be built anywhere you like but it'll take a while before you get to grips with Oriental Empires' unforgiving rules regarding what makes for good placement. Other leaders will extort, and then eventually assault you, diseases and pestilences will befoul you and bandits will grief you without you really having a great deal of recourse other than a few technologies that can be developed to counter these miseries. The tech trees also combine this attention to detail (being presented on classy game pieces with evocative backdrops and interesting-sounding names) with a lack of real innovation or anything interesting to set them apart from other games in the genre.

In that Total War style, you have playable family members (a leader and an heir) who are accompanied by tough-guy bodyguards and can wander around the map worrying your enemies. These leaders can also pop encounter squares - again, this is a great opportunity for something unique but tends to be straight-up sales of certain resources which you can take or leave. A far cry from some of the random situations that can occur in, say, a game of Crusader Kings 2. 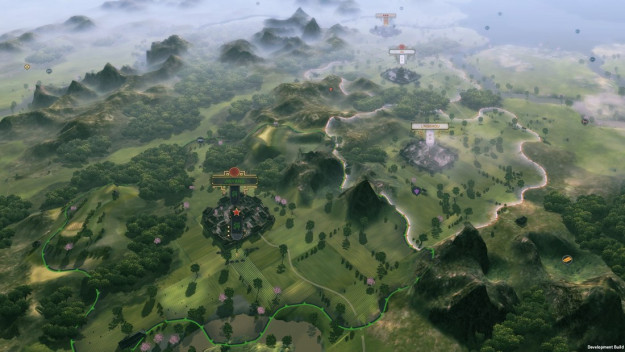 So we come to the fun payload. It's sort of lacking. We've played games like this before, many of them really excellent and with depth and character. Oriental Empires certainly looks nice and has a classical Chinese feel that helps it along its way, but once you're through the surface, it's a lacklustre 4X without a great deal to set it apart from the pack. Much of the time, Oriental Empires feels like playing a game of Total War where you auto-conclude all of the battles, but with a penchant for very slightly unfair and unavoidable disasters.