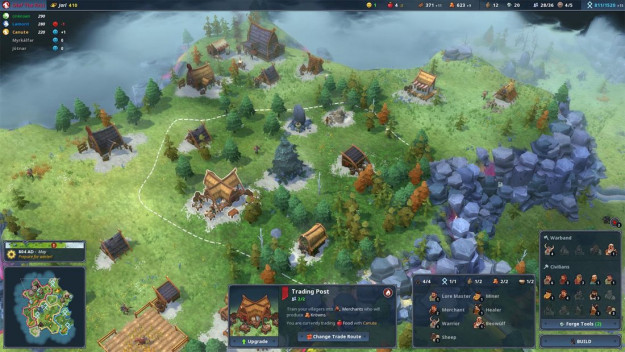 Written by Shaheryar Ehsan-i-Haque on Sat, May 12, 2018 1:28 PM
Northgard
Where does Northgard rank in the list of the most demanding games?
100+
Rate this game User Rating
What's your user review score for Northgard?
5.5
Ok Not Ok Optimisation
How well optimised is Northgard for PC? 5
5

Northgard is a mixture. It's an amalgamation of one extremely popular strategy game, Age of Empires, and an altogether less popular one - Grand Ages Rome. It technically combines the dynamics of both of the games and builds a new precedent with its own storyline and diverse campaigns.

The campaign of Northgard revolves around a Viking tale where the Northmen travel to new lands under an energetic leader who is out to avenge his father's murder by Hagen. The campaign is quite extensive and will require a great deal of time and patience to go through. Difficulty level will also be fine even if you are new to RTS games thanks to a disarmingly simple base loop and great onboarding.

Being a strategy game, Northgard has all the essential elements of basic town level management which include military buildings, mines, farms, hunter lodges and more. It also takes into account the needs of the people and if the public aren't happy, even the harshest of all dictators will struggle to survive.

The first part of town-level management is adopted straight from the Age of Empires textbook. However, Northgard refines those classic dynamics. In Age of Empires, you can squash buildings in the smallest of all zones except rocky terrains but in Northgard, you have to develop an area to increase the building count. And once again, this is an adoption of a real-world scenario.

The part where it really differs from AOE is the villagers can become specialized workers and they cannot be assigned another task until they are converted back to villagers from the town hall. This is a good restriction and the tab on the right side can help the user quickly navigate to the desired worker if any repositioning is required or vice versa.

Shiro Games has focused on the minor parts which were often neglected. The specialized workers include a Scout and only he is responsible for navigating the land. Even your warband cannot navigate the land if it hasn't been explored first by the scout. Talk about giving a special status to the Scout Cavalry in AOE 2.

Not all refinement is good, however. There are many important features which distinguish Northgard from other strategy games. Population growth is interlinked with the number of houses of the town. This part is fine but the player should be allowed to keep a check on the growth of the population. Just because a house is built doesn't necessarily mean I would like the population to swell to that number. Automatic spawning of villagers if you have the required happiness and space doesn't really sit well in a game that's tight on resources.

Speaking of happiness, Maslow's Hierarchy of Needs tells us that motivation of employees is directly linked to satisfaction of basic needs and a pathway for higher level needs. You have to take care of the needs of the people. There's a similar feature in Grand Ages Rome but they are more dominant in Northgard. The most basic need is for food and shelter but the town folk will become even more demanding and will want an upgraded Town Hall and entertainment. Fear the will of the people if you can't do this.

The food you can collect through specialized workers depends upon the type of land. For instance, some areas are good for hunting and some are good for fishing etc. This itself is an implementation of a real-life scenario but poses some significant problems once the population grows. If you are able to develop a land for more buildings that should also mean you're able to develop that land for farming too. Areas can become fertile provided they are worked upon well.

There is also the concept of Lore and Loremasters which will help you attain special abilities for your town. This is similar to the concept used in Age of Mythology. Loremasters can gather lore to research on a new ability, such as Mining, which significantly improves the skills of a miner. Lore has to be used carefully because ultimately it will define the direction your clan takes. You could have an economical base, or military superpower, or an industrial base with exceptional resource gathering skills. All this ultimately influences the happiness of the people and how you will distinguish yourself from other players. 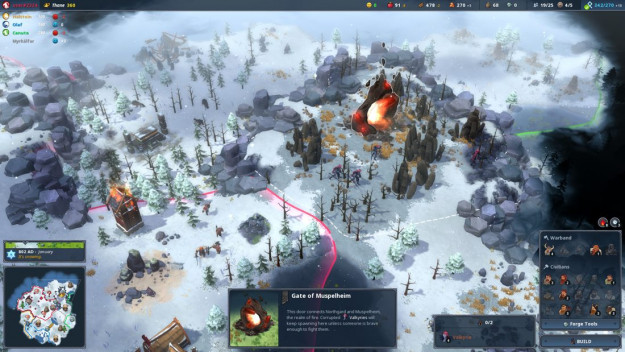 Finally, we have the concept of clan fame which is simply an adoption of superpowers, hyperpowers and more levels of today's states. Clan fame will determine your superiority and it is a measure of how gratified your people are as well as weighing the player's technological and military prowess and territory of the clan to determine your regional superiority.

All other dynamics of the game are pretty much the same as that of a normal RTS, pleasingly enough. You can trade with other clans by setting up marketplaces with merchants. This plays a significant role in increasing your relations with the clan you are trading with and will make them your allies. Attacking other clans and taking over their territory will result in a backlash for which you should be prepared for.

All in all, it has to be said that Northgard is an extremely promising premise. It has a good storyline with challenging campaigns. While there are some minor hiccups here and there, overall, it's an awesome addition to the RTS genre.

this game is hardcore,
I wouldn't hesitate that mastering this game is more difficult than master degree at economics college,
basically everything you do in the game has negative impact on resource consumption, so it's not that difficult to starve within first winter if serious blizzard strikes,
unlike age of empires iii, everything is much more limited here, having army is very ineffective strategy while not having any is deadly as well,
it's really challenging (playing at highest difficulty of course) compared to any RTS I ever played, and strategies are among my top 3 game genres, so I've played a lot :D