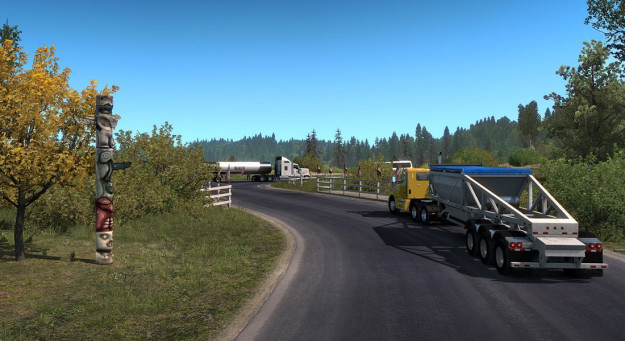 From the creators of American Truck Simulator and Euro Truck Simulator 2, SCS Software, comes a brand new and much anticipated DLC. The beautiful and massive Oregon DLC. Truckers can now embark on a massive 1800+ mile journey (2900km for those on the metric system) from the top of Oregon to the very end of New Mexico, provided you have both DLCs of course. It finally comes close to the massive 2000-mile journeys of Euro Truck Simulator 2 with the added Italy and Scandinavian DLCs. Put on your favorite tunes and start hauling some massive deliveries, and very expensive ones at that.

While not as popular as Euro Truck, I'm a strong believer that American Truck Simulator is a lot more fun to play, given the much wider roads in the United States you don't get frustrated in the narrow and tight turns with lots of traffic. The scenery is also far more pleasant but this is down to personal preference. And, of course, the team at SCS does an amazing job depicting the state/country they are adding into the game.

How great of a job do they do? In the France DLC for Euro Truck, in the city of Nice where I live, I can get in my car and drive out to where the garage and companies are and it is unbelievably close to real life. And Oregon is no different, from the farms and vastness of the deserts bordering California, to the massive amount of bridges in and around Portland, Oregon.

For people who aren't familiar with just how popular Euro Truck Simulator 2 is, with the TruckersMP multiplayer add-on, their Europe 2 servers are usually filled to the max with 4200 players. They also have servers with no traffic for those who really want to deliver something extra quick. I really wish that American Truck Simulator was as popular, it's just as enjoyable of a game to play as ETS. Hopefully, in due time we'll have much greater distances then Euro Truck Simulator 2.

Now, of course, with every game and DLC, there are always some cons. As amazing as Oregon DLC has been made it is missing quite a few roads that would make deliveries quite a lot easier. For example, getting from Lakeview to Klamath Falls, one must drive down back into California then back up to Oregon, there's no driving through Fremont National Forest here. Yet. It's the same story from Klamath Falls to Medford; one must drive the long way around and it's quite a difference in terms of distance. The beauty of Oregon does make up for this issue but, hopefully, these extra routes get added with future updates, just as SCS did with California and the addition of more scenic roads.

SCS Software has also added different industries. Being Oregon there are quite a lot of logging and lumber industries; there's nothing more fun than taking a double trailer filled with 50,000lbs (22.6T) of lumber through the forests of Oregon to make a delivery. 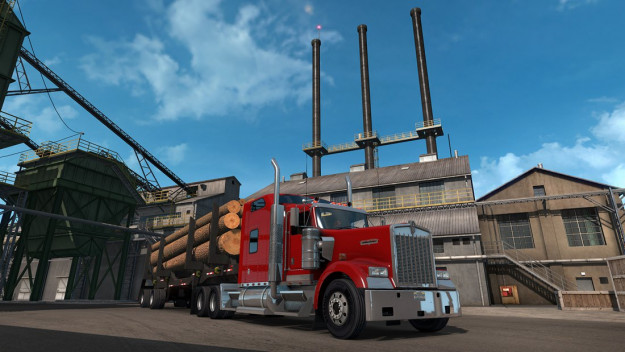 I would also like to give a shout-out to SCS for fixing a very major bug I stumbled upon while playing the DLC for review a few hours before the official release. I was making a delivery from San Francisco to Lakeview in Oregon and couldn't cross one of the bridges that was on my way to the Oregon border. I gave SCS a tweet rather quickly and got a response from their QA team leader. They proceeded to have the same issue and using the developer console in-game found an invisible wall spanning across the road making it impossible to cross. A subsequent patch was put out that fixed the issue. I was a little surprised to find it made it through testing but also glad it was fixed. Shout-out to Michal Turecek for solving the issue.

Overall, if you play American Truck Simulator quite a lot then the Oregon DLC is absolutely worth buying. It's also a bit cheaper than the Euro Truck Simulator DLCs so it makes it worth purchasing, especially since the ETS and ATS DLCs are often on sale on Steam. 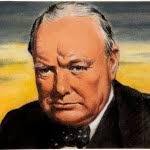 God this dude is good at reviews.

but for online ets2 has more ppl

Yea i think i wrote that in my review not sure. It's pretty crazy the amount of people but can also be downright annoying. I've been rammed online more then I've made successful deliveries. Played last night, parked on the side of the road and just had a kid ram the side of my truck for no reason haha. Other then that it can be quite fun.

If they ever included Idaho or Utah as DLCs I would have to buy the game just for those. That would be amazing.

I would assume that those are probably coming. The city of Ontario is already border line and in the game you actually drive into Idaho just a bit from what it seems. Utah would be fantastic as well, especially if they add driving by/around the salt flats. I have a blast playing these DLCs. Got a friend into ATS since i got it in my humblebundle last month. It's a lot more enjoyable then people think it is. I get tons of views writing these reviews, more so then AAA/AA titles I've reviewed. Not too many people seem to be writing reviews for it.

What does "Missing important roads." mean?
They should be there, but aren't? Like, glitched out or something?

They haven't added em to the DLC. As in it's not even there haha. I'm waiting for Beyond Baltic Sea to come out for ETS2, they seem to be way more detailed with ETS2 (makes sense since way more people play it).