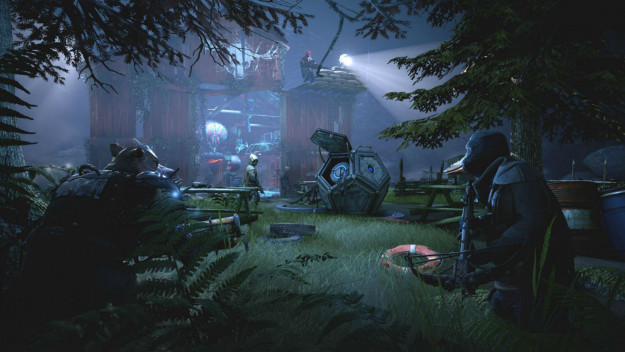 Mutant Year Zero is an utterly absorbing blend of turn-based tactics, real-time adventuring and stealth. It wears its XCOM inspirations on its sleeves in regards to grid movement, two actions per turn, Overwatch, and unique class skills. It differs greatly from XCOM in terms of the package that binds it all together though.

Mutant Year Zero: Road to Eden is a compact tactical RPG set in a post-apocalyptic Norway. Nearly all humans are extinct thanks to a combination of natural disasters, global warming, and nuclear devastation. A single remote settlement known as the Ark remains, inhabited by a handful of humans and an array of the titular mutants. This includes the player’s party, such as the crossbow-wielding Dux the anthropomorphic duck, and Bormin the shotgun-toting boar.

The general gist of the narrative is that the Ark’s existence may be under threat from powerful sources, and an expedition sent out to find out what’s happening hasn’t returned. It’s up to the player to trot about this lush, post-human world in an effort to tracking the missing members down and find out just what this threat is.

MYZ: Road to Eden features an overworld map with dozens of interconnected areas, each handcrafted with a fixed placement of enemies. Players are free to explore in real-time, finding loot, scraps of lore, and secret areas, as well as using stealth to thin the numbers in the enemy ranks before starting a proper battle. Enemies have vision cones (well, circles) which need to be skirted around to stay hidden. They also sometimes patrol as well, allowing for opportunities where they can be singled out.

With the tap of a key, the real-time sneaking transforms into turn-based combat. Take the enemy, or enemies, out with silenced weapons in a single turn and they won’t be able to alert their comrades. Fail though, or use loud weapons, and nearby units will hear and come calling. The odds can quickly become insurmountable if their numbers aren’t sufficiently thinned before a big battle though, and it’s a game that can be incredibly unforgiving.

It makes for a great little mix of stealth and tactics, and even towards the latter parts of the game I was discovering new methods to thin the herd and alert as few nearby units as possible.

When it comes down to the turn-based battles though, this is where Mutant Year Zero reverts to the XCOM shenanigans. Up to three units are under your control at any one time, although there are spares with unique abilities that can be subbed in and out. Each unit can be equipped with two weapons, multiple grenades, body armour, and helmets, and finding and upgrading loot is an important part of MYZ’s gameplay cycle.

On top of this, each unit also has a fairly barebones skilltree. Here, basic stats can upgraded such as health and movement distance, but each unit also has Passive, Minor and Major abilities that can unlocked. Only one ability from each can be equipped at any one time, so it’s important to prepare for a battle with the correct skills. Abilities include being able to take two shots in one turn (at reduced accuracy), preventing enemy movement for a turn, or using a charge to knock down enemies and stun them.

It’s the tactical element where Mutant Year Zero makes a few missteps, and they’re kind of glaringly obvious errors which have long been sorted out within the tactical strategy genre. First and foremost, tactical strategy thrives in its combination of fixed, predictable tactics alongside randomised odds. The former gets the brain cells working, the latter adds the thrills and the risk. For a long time now, it’s been pretty standard practice to show the potential maximum movement and firing capabilities of both your own squad and the enemy units. Mutant Year Zero does neither. 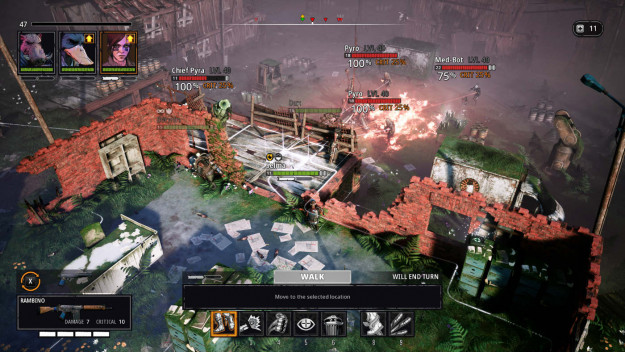 Select one of your own units and activate the ‘Move’ ability and MYZ shows how far a unit can move, as well as whether this will use one or two of your available commands for the turn. You can either move a great distance, or move half as far and use another command such as Fire Weapon or Throw Grenade. So far, so XCOM. However, Mutant Year Zero never exposes the player’s weapon range on the grid, limited it to symbols hovering above enemy heads showing the percentage chances of hitting. For the most part, I could get by with this information, but abilities such as Overwatch rely on knowing exactly which squares are being covered.

So that’s annoying, but what’s more irritating is that literally no information on the movement range or firing range of enemy units is communicated, to the best of my knowledge. It’s therefore total guesswork in terms of where you can be attacked from. This problem peaks with a couple of particularly troublesome units.

The first is the Tank. These are brutally strong armoured units that can run toward a squad member, knock them down, stun them, and fire a point-blank shotgun blast at them within a single turn. Get caught by this and it’s devastating, and usually game over. It really would be so, so useful from a tactical point of view to know how far this unit can move. Without this I was just running away all the time to try and keep my distance, taking potshots from afar.

The second are the mind control units. Some enemy units can control minds or send psychic blasts through cover. Only, it can go through some cover, but not others. It can be used upwards but I don’t believe through a floor. And god only knows what distance the attack has. This hugely takes away from the tactical element of battling these foes and leads to too much guesswork.

None of these are enough to overly tarnish my overall experience with the game in any big way, but they’re certainly curious oversights. That’s not to get in the way of an experience which, overall, I found both excellent and refreshing. There’s a lot of XCOM and Mario + Rabbids in here, but there’s also plenty which feels unique to Mutant Year Zero. It’s gripping yet occasionally frustrating tactics wrapped in a unique setting with a gloriously modern-future vibe. One of nicest touches is the various ‘Artifacts’ that can found, such as a boombox, a telescope, and an iPod. The mutants have heard legends of this but often don’t know what they’re actually for, often remarking on how odd their ancestors were. 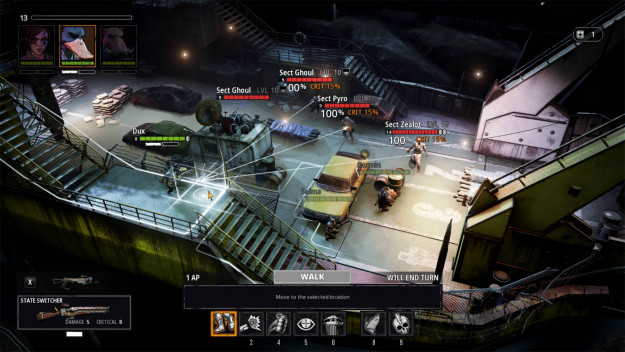 But, and this can’t be emphasised enough, Mutant Year Zero: Road to Eden is punishingly difficult. I played on the second of two difficulty levels with permadeath off and would sometimes have to reload a dozen times on a single turn just to try and figure out the single combination of moves that could see me survive. MYZ forces you to use every ability, stat upgrade and item to the max, which I have to say I relished. Ordinarily there tactics and items I end up totally ignoring in a turn-based strategy game, but here I was forced to mess around with just about everything. Most importantly, it was always possible eventually. Incredibly hard but possible, and it’s immensely satisfying to puzzle out the right solution. I do shudder to think what permadeath mode is like though.

Hardcore fans of turn-based tactics may be slightly put off by Mutant Year Zero’s obvious missteps but that aside, The Bearded Ladies have cooked up a special game here that’s got great potential for the future. Road to Eden isn’t perfect but it’s definitely stood out from the crowd for me in what’s been an excellent year.

I disagree with this. I think it's a brilliant game from a pretty small team. I like that it is linear and a lot of attention to detail has been paid to the design. The atmosphere feels very alive and I enjoy the stealth bit where you explore each map looking for enemy weaknesses. I found myself spending just as much time looking at the scenery. The mixture of stealth, and tactical combat is very enjoyable. I have found a lot of different tactical approaches and combos.

There are some small bugs that the devs have been good at communicating about/working to fix. Nothing game-breaking (for me anyway.) The game being somewhat short is a reflection of having a small budget. The characters are still enjoyable and the story is intriguing. I enjoy this game a lot and hope they are successful enough to keep building on this foundation. I highly recommend.

I don't know if I'm just bad lol but it did last me about 20 hours on the middle difficulty. I don't think that's too bad at all and I was ready for the ending

Great read. Thank you for the review.