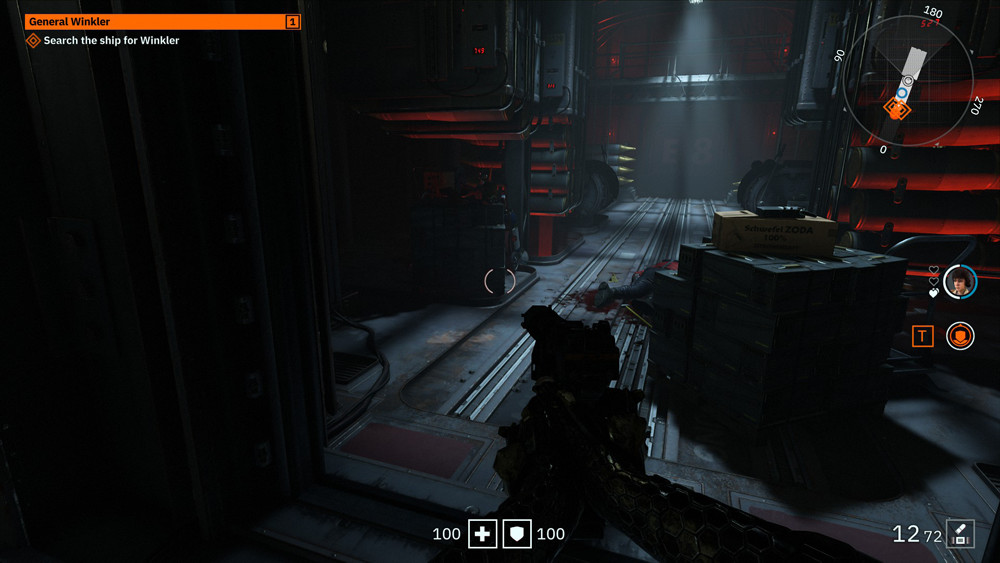 Birds of a Feather Kill Together - Wolfenstein Youngblood Review

Youngblood is a joint project between Wolfie regulars MachineGames and Dishonored maestros Arkane Studios. On paper, this sounds like a match made in heaven. The slick, blood-soaked FPS gameplay of MachineGames and the systems and ability-based approach of Arkane. Unfortunately, neither of these studios can quite make the imprint on Youngblood we were hoping for.

Wolfenstein: Youngblood takes the tried and trusty Nazi-baiting gunplay of the reinvigorated first-person shooter series and crowbars co-op into the mix. On Arkane’s part, their dense world-building and complex level designs do certainly bleed through into this eye-catching rendition of alt-history 1980’s Paris. That aside, this is a romping, stomping MachineGames shooter through and through.

We’re in France and Third Reich has maintained a vice-like grip on the capital. It’s been 40 years since, in reality, World War 2 had ended. Faceless killer turned likable chappie, B.J. Blazkowicz, has gone missing. His twin daughters, Jessica and Sophia, are on his trailer and looking to find their father somewhere on the streets of Paris. Before long, the Terror Twins find themselves wrapped up within the French resistance, leaning on all their tricks to stay alive.

And, if you were ever in doubt about Youngblood’s co-operative aspirations, the main menu will make doubly sure. Bethesda tries to insist on logging with a Bethesda account every time you hit the menus, while starting the campaign provides options for Host Game, Quickmatch, and Join Game. In order to play solo, you need to select Host Game and set it so nobody else can join. You’ll then get an AI partner to help you along the way. It’s a fairly shonky setup that makes Youngblood feel like a co-op game with single-player tacked on. As it turns out, the opposite feels true during actual gameplay.

There are a few different routes which developers can take when going the co-op route. They could build a game from the ground up to be co-op, for example, with plenty of mechanics only possible when two users are playing. MachineGames feels as if they went a different route, tacking on co-op by giving enemies massively pumped up health bars.

Sadly, the power fantasy that Wolfenstein has represented has diminished with the shift to co-op play. Gone are the fast-paced, shockingly brutal kills. In their place are health bars and bullet sponges, kicking Wolfenstein down from its place at Doom’s table and joining the likes of Destiny to feed off the scraps of RPG-lite fare. It’s all a bit disheartening really, and we wind up with a game which, outside of the theme, doesn’t feel enough like the Wolfenstein we know and love at all.

Say goodbye to one-shot kills, say hello to emptying 24 shotgun blasts into a single enemy on the second level before they drop dead. The rebooted Wolfensteins have had their fair share of bullet sponges but these are usually predicated by boss-type scenarios. In Youngblood, every enemy takes that bit longer to drop dead.

This all led me to a sort of mental realignment. I had to take Wolfenstein out of one box and slot it in another. It’s now one of those games which are good for shooting the breeze with a mate. Background noise for a catch-up about footie results and questionable Nazi impressions. You won’t ever be particularly keen to play this game on your own at all. This is a vessel for a chinwag with mates.

On that front, Wolfenstein Youngblood succeeds. This is a game which can never meet the heights of The New Order or The New Colossus, but a different being - a time-killer. And look, taking down the Third Reich with mates is every bit as fun as you’d expect. Some immediacy is lost with the RPG-like health bars but it’s still damned good time to find ever-escalating weaponry and unleash it on the Nazi scum. Nazis are fun fodder, now and always, and doing it with a buddy will plaster a grin across your chops from time to time. There’s also an identity to Wolfenstein which is all its own. It’s campy, schlocky, and it plays into what can make co-op a raucous rollercoaster of mayhem. 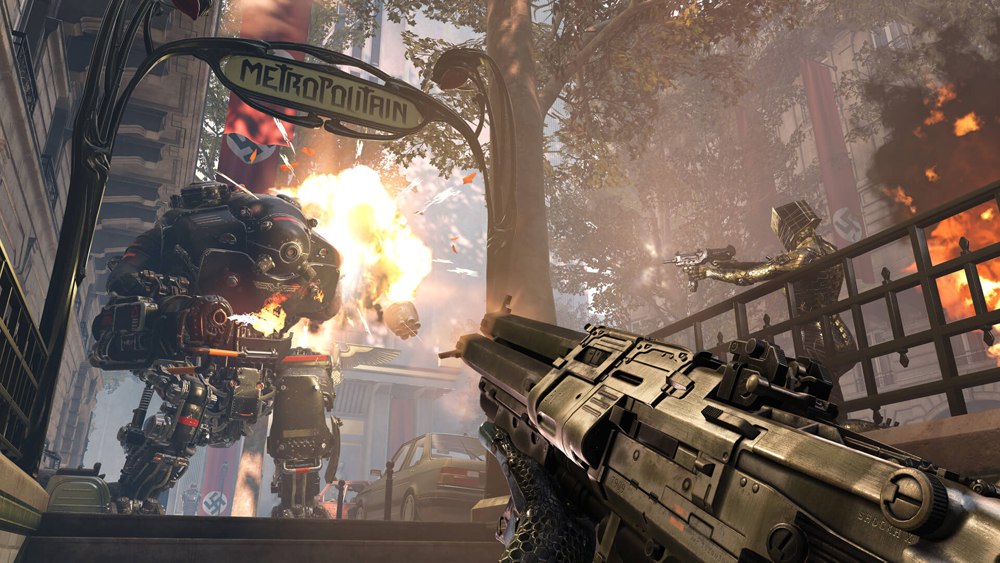 Wolfenstein never lets down on the feel of the action either, even with those sponges. Weapons are chunky, shredding the environment apart. Bullets blast out like an atomic punch, while there’s plenty of cause to switch it up between the weapons as you scrabble frantically for ammo mid-fight.

Structurally, Youngblood is once again a little different to what’s come before. Rather than run through a series of sometimes open-ended levels, Youngblood is set on the streets of an open-world Paris. If the idea of latching onto open-world tropes has you rolling your eyes, there’s not much in Youngblood to salvage those feelings. It’s a comparatively paper-thin narrative compared to what’s come before, elongating the experience with a romp around four Parisian districts, each filled with collectibles, security towers to destroy, and various little side-missions to get stuck into. The bombastic set pieces we’ve come to know and love from Wolfenstein have given way to an open-world checklist. You’ll be sent out to kill a certain Nazi lieutenant, rescue some random civilian in a pickle, or destroy x number of y objects. It’s more formulaic than anything we’ve seen from these two studios before, fortunately salvaged by the satisfaction that comes from just messing about with a mate.

We’d have hoped Arkane’s experience with Dishonored’s open-ended design and flexibility afforded by unique player skills would’ve lent a playbox element to Youngblood but this isn’t really the case. It’s a fairly straightforward run and gun shooter that could well prove wearying outside of co-op.

Story-wise, there isn’t quite that same pull. The New Colossus has some fantastic writing. Often witty, always entertaining. Youngblood’s writing can feel like an afterthought. A flimsy drape to explain away the chaotic on-screen hijinks. At no point does it feel as if you’re on the cusp of significance, or that the plot could take a wild right-turn such as traveling on a damn space ship to Venus. Here, this is sadly Wolfenstein played safe. 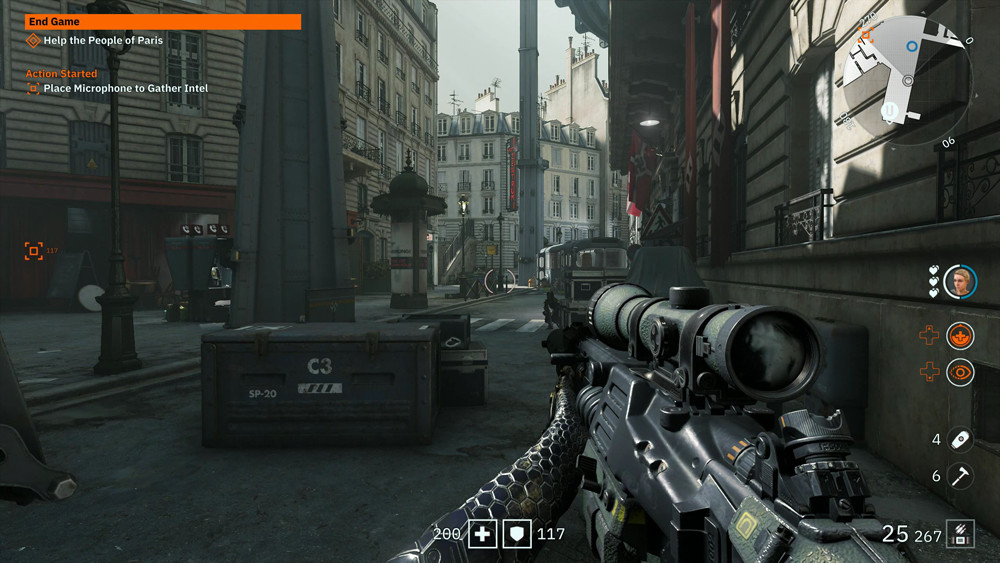 If you’re contemplating giving Wolfenstein: Youngblood a shot on your own then we’d wholeheartedly recommend you at least play through any of the three previous Wolfenstein standalone projects before getting around to this. Youngblood is the weakest campaign of the bunch, saved by the Nazi-hunting joy of co-op. You can definitely have a ton of fun playing Youngblood as it’s intended but stooping to using an AI partner takes off a lot of the shine. Even some simple commands could’ve helped here but instead, it’s a fairly rote AI buddy which just trots around behind you being a handy distraction.

It breaks my heart a little to slap a relatively low score on this. Both The New Order and The New Colossus were fantastic reinventions of a venerated gaming franchise, delivering satisfying gunplay with surprisingly touching narrative hooks. Youngblood still has that great feel, it’s just wrapped up in a co-op focused bubble which detracts from the traditional flow of the game.

Two of the most annoying protagonists in a long time... I'm so glad I didn't pre-order. The writing seemed crap from the very first trailers, unfortunately.
Not to mention the addition of microtrash, bad AI for SP gameplay, bullet sponges, etc.

The amount of bad and mediocre games has just started to rise in the last 3-4 years, just look at what companies did with the fallout franchise, new ip´s such anthem(pretty much all EA´s games), tons of battle royale in 2018, and now they f+ck wolfenstein, of course there will be always good games but i fell like this could get worse as the years pass by and the new generation (kids) buy their half-finished/cash grabbing games :/

Great gunplay? I don't think so. If there's one thing that failed in the game was the gunplay.