Written by Stuart Thomas on Sat, Nov 2, 2019 2:02 PM
Disco Elysium
Where does Disco Elysium rank in the list of the most demanding games?
100+
Rate this game User Rating
What's your user review score for Disco Elysium?
8.55
Ok Not Ok Optimisation
How well optimised is Disco Elysium for PC? 5.2
5.2

Disco Elysium is a game that talks to you. Or, rather, you talk to yourself. But there are lots of you, or perhaps that should be yous. Slivers of your psyche - some smart, some paranoid, others given over to fascist tendencies... they are the building blocks that make you, each to a greater or lesser extent, the person you choose to be.

Does this sound too conceited and smugly highbrow to make a fun game? Well, you probably want to skip the rest of this review and save your money because Disco Elysium is VERY keen on this kind of stuff.

Usually, fictional worlds are an analogue of our own world in some easily-digestible way. We all get 'steampunk', for example. But the world of Disco Elysium, while feeling like an analogue for our earth in almost every imaginable way, is actually different in every way as well. Technology developed in a different way, the main events of the last century are faintly familiar yet focused primarily around a failed Communist uprising that certainly never happened in our timeline... it's different, yet it looks and feels believably earth-like. Obviously, a ton of world-building has taken place long before the story of Disco Elysium was written, evidence of the game's tabletop RPG roots. 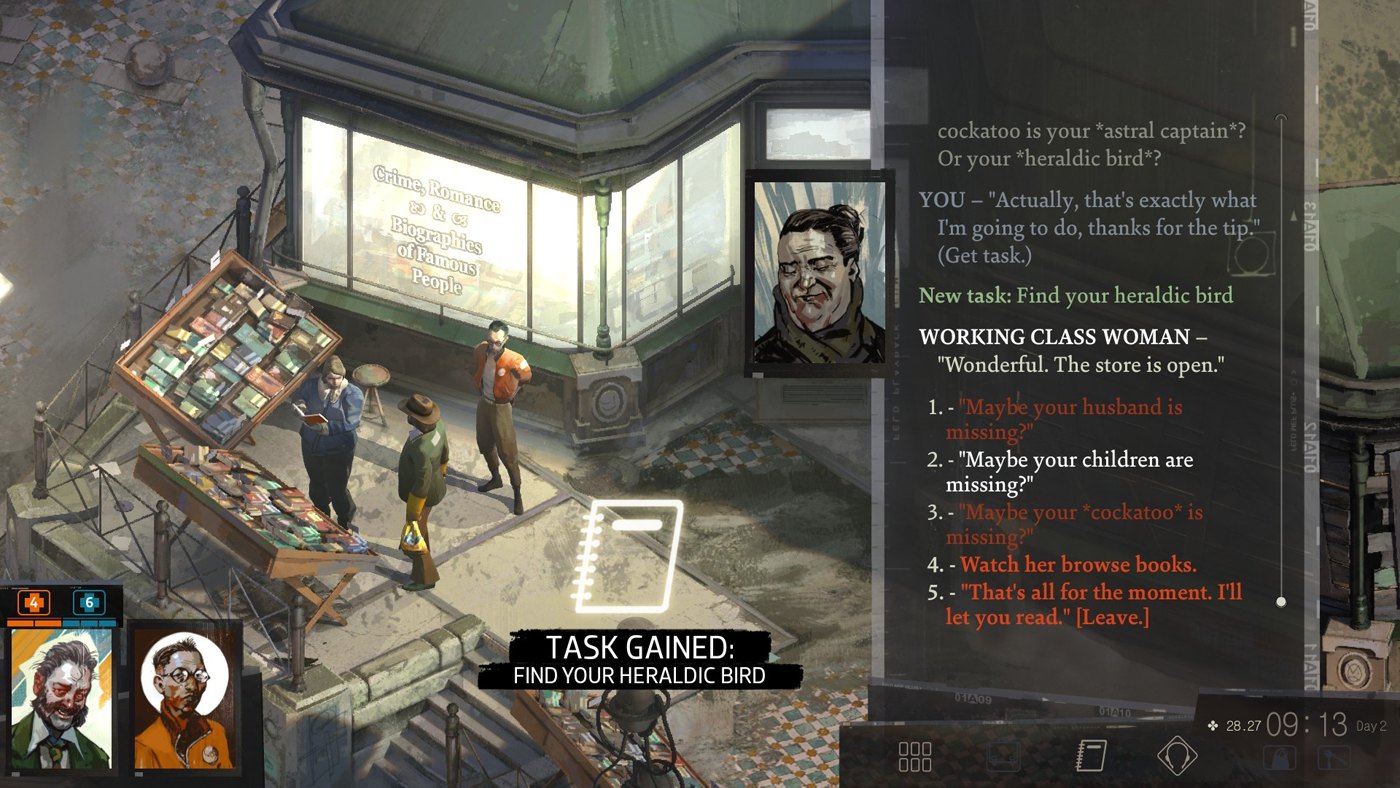 It's difficult to really describe your character without spoiling anything, and if there was ever a game to come at cold, it's Disco Elysium. Waking on the floor of a trashed hotel room with a monumental hangover and no memory of yourself or even the basic things in life (such as money and how to use it), you stumble from place to place figuring out that you're a policeman, and there's a murder for you to solve.

But back to the talking. You build your character from a suite of twenty-four skills, each keyed to a primary attribute such as intellect or physique. So far, so good. But a glance through the skill list immediately raises questions - skills such as inland empire, or shivers, or half-light, or visual calculus, or drama... it soon becomes clear that this ain't your momma's RPG. For example, half-light is essentially your paranoia skill. If it's too low, you won't be prepared for that villain pulling a gun on you. But if it's too high, you'll suspect everyone you meet of being out to get you. Your composure skill is your Clint Eastwood face of stone skill. It allows you to keep your feelings masked. Because this is kind of your 'cool' skill, it also governs your understanding of fashion. If this skill gets too high, it'll constantly bombard you with its opinion of the fashion choices of the NPCs you meet. If your inland empire skill is too high, your tie keeps telling you to arrest everyone and you can have meaningful discussions with the mail box. And that's not even the craziest skill. 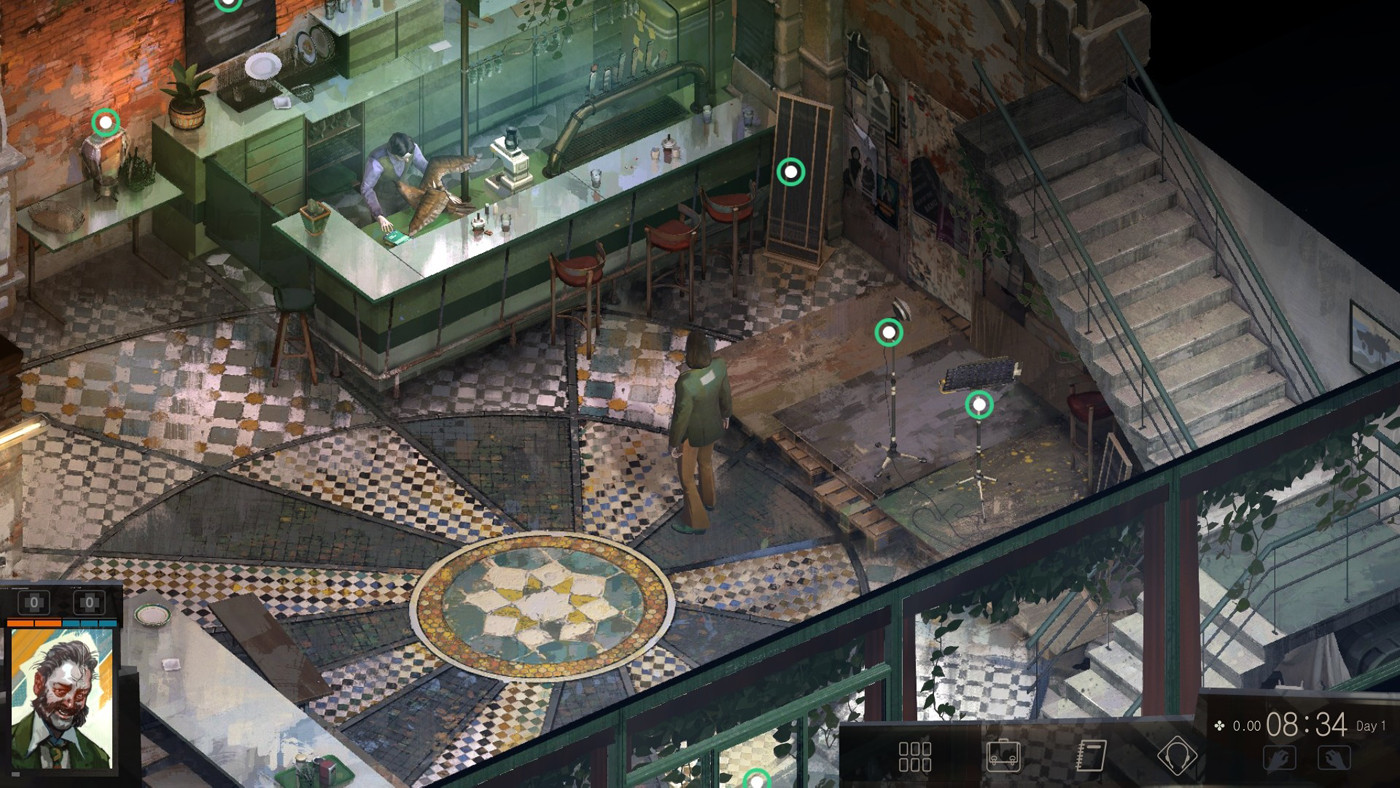 So yeah. Basically, each of these skills has a personality, and they're constantly talking to you, putting forward their own opinions. They argue amongst themselves and discuss things from time to time. Often, they can give you insight, ranging from a spotted cache of items or cash from a high Perception skill to a poignant observation on childhood events that shaped the person to whom you're speaking. Skills get tested HARD, all the time. If someone throws you a coin, you make a hand-eye coordination check to catch it. If you want to ask someone for money, there's a skill check to see if you can muster up the courage to straight-up ask.

Because you're such an unusual character, your foil, Kim Kitsuragi, plays it straight. You might discover some unusual things about his personality over time. For the most part he's there for you to bounce ideas off - and to ensure that no matter how crazy you act, you're always still on the case. The relationship between by-the-book lawman and... whatever the hell you are is one of the many ways in which Disco Elysium is a crack-up.

It really is. I honestly haven't laughed out loud at a game in years. The choices it gives you, particularly in dialogue, are often hilarious, and written with skill and panache. Part of why it is so funny is that it is unexpected, because so much isn't comedy. The story, which is really three stories, swerves madly between the crime you're trying to solve, your own sordid backstory, and the politics of the world itself. Often sad, occasionally mournfully beautiful, and operating at several emotional levels at once, the humour, like in life, is just one facet of the whole. Your madcap antics often come back to bite you in ways that remind you that when you act like a bull in a china shop, the china really does get broken. People's feelings can get hurt, and it matters in ways almost never really explored in a videogame.

On the surface, then, it's an isometric RPG with absolutely tons of text to read. All of the real action takes place in text, including combat, which is just a series of decision trees the same as a conversation. It works amazingly well. This isn't a game for people who skip through the text bits though, because aside from the beautifully-drawn environments, the text kind of IS the game (It's sort of amazing that, in 2019, a mostly-text game like this can still feel so revolutionary).

Aside from your skills, you also have a thought cabinet, a series of spaces where you can incubate thoughts that might interest your character. These thoughts result from the actions of your character and have mechanical effects. Let me explain with an example.  So, say, for instance, you tell everyone you meet that the apocalypse is coming. After a while, one of your skills will suggest that you are probably an Apocalypse Cop. If you agree with this assessment, then the 'Cop of the Apocalypse' thought will become available. Drop it into one of your spaces in your thought cabinet, and it'll just kind of develop in the background, like thoughts do. During this time, you'll suffer a penalty to your Rhetoric skill, but after about seven hours you'll have completely internalised the thought, and you'll get a suite of advantages - in this case, you can put more skill points into the inland empire and shivers skills.

Additionally, and perhaps more importantly, you'll open up new options in the conversations based on your new understanding. These are not always deep, philosophical thoughts - I was fond of the Finger Pistols(9mm) thought, that was basically just me making little gun shapes with my fingers and gave me a bonus to suggestion so long as both my hands were empty. 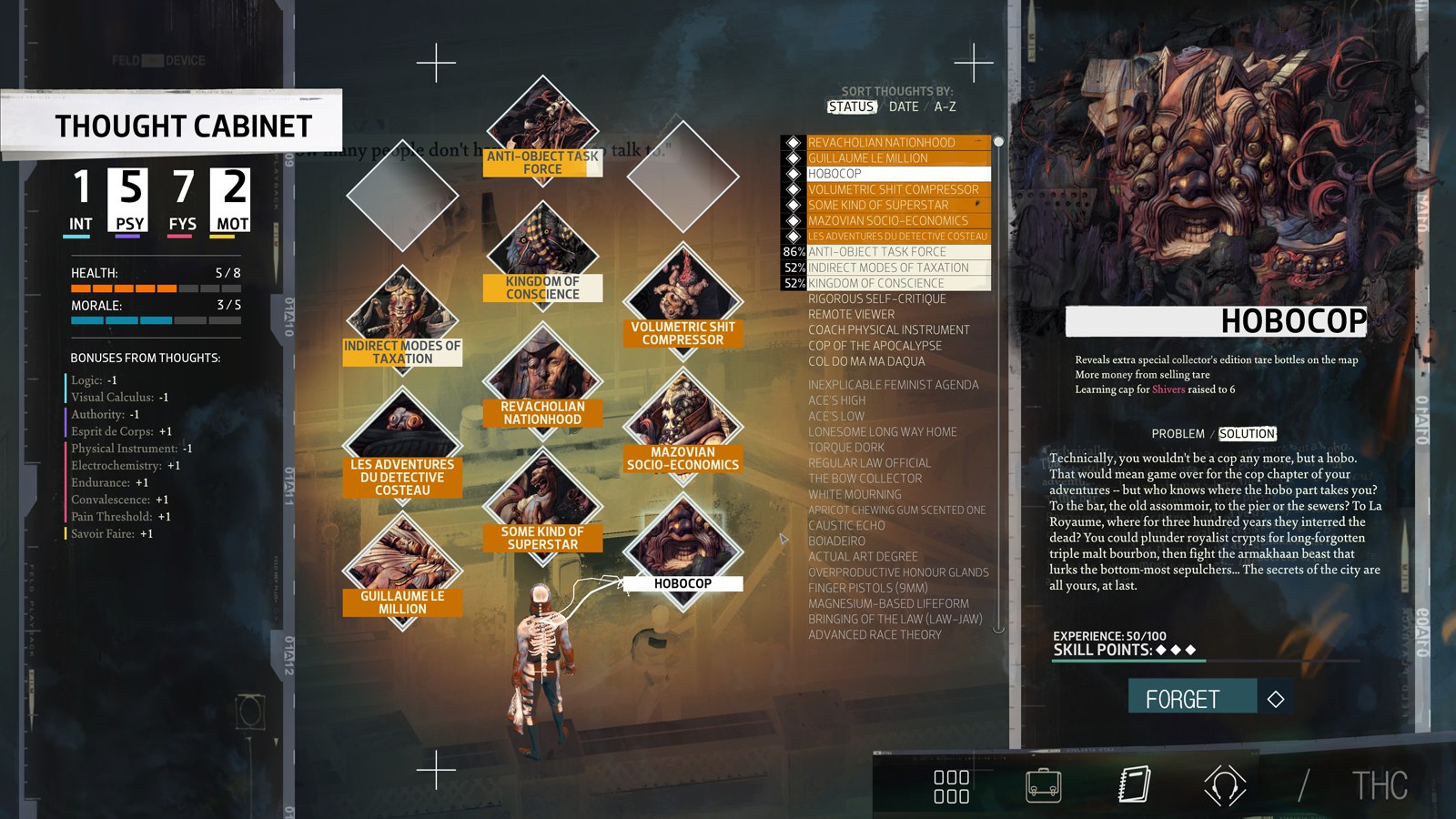 There's nothing even remotely like Disco Elysium. If I had to point at a group of gamers and say 'YOU THERE! You'd like this!', it'd probably be people who liked Pillars of Eternity but wished it was more like Planescape: Torment. And who also like Twin Peaks. Honestly, Disco Elysium is the love child of Planescape Torment and Twin Peaks, now that I come to think about it.

I loved it, though I barely understood much of it. It's a wild ride despite being mostly walls of text. It's the only game where I honestly couldn't say what I thought my character would do at any given turn because I felt I barely knew him, and that was, I feel, by design. You're getting to know him as you're making the choices that define him. Like you are, in a way, with yourself in real life.

God, now it's made me into a philosopher.

Played this game for around 10 hours, but the amount of thinking you have to do in these game is simply too much for my dumb brain.

Though I still have it installed and will try it again after I free myself with the worldly dealings.

Great review thats the only Con I would give as well ....