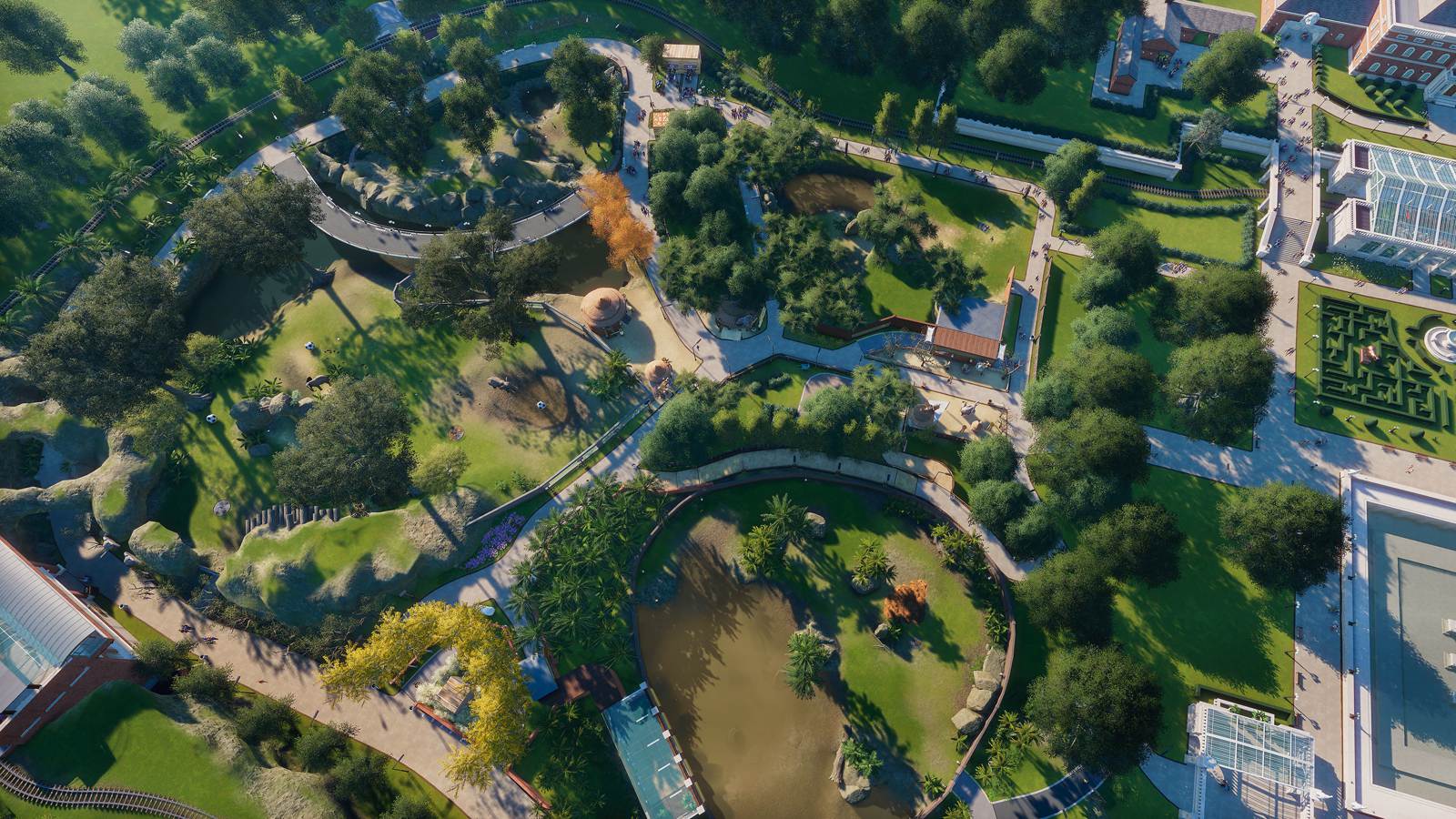 Written by Jon Sutton on Sat, Nov 23, 2019 2:00 PM
Planet Zoo
Where does Planet Zoo rank in the list of the most demanding games?
100+
Rate this game User Rating
What's your user review score for Planet Zoo?
7.67
Ok Not Ok Optimisation
How well optimised is Planet Zoo for PC? 3.6
3.6

For gamers of a certain age, Zoo Tycoon no doubt conjures up some fuzzy memories. Piggybacking on the success of RollerCoaster Tycoon (yet having nothing to do with it), Zoo Tycoon was a fun zoological twist on the established Tycoon format, although the zoo setting certainly had its shortcomings when compared to coaster design. There was only so much you could do in terms of sticking an animal in a giant cage, you see, which is probably why the expansions had to go a bit off-kilter and introduce things like dinosaurs.

18 years later though, a lot’s changed. It’s now possible to create a zoo management game with infinitely more detail than was possible in 2001 and, with Planet Zoo, Frontier Developments has certainly done that. They had a stab at their own Zoo Tycoon back in 2013 but this is so much more than that. This is the zoo management game for the creatively minded, for the folks who want to analyse every little detail and customise the aesthetic to their heart’s content.

The big picture of Planet Zoo is largely the same as Planet Coaster. You’re building a park that’s designed to be as entertaining and comfortable for guests as possible. You want to attend to their every need, including attractions, food, drink, toilets and other amenities, and ensuring it looks as aesthetically pleasing as possible.

Zoom in though and the minutiae of running a zoo becomes a very different experience to a theme park. For starters, your entertainment isn’t just pipes, girders and struts. It’s animals, each with their own needs. Each species needs carefully crafted habitats, whether that be swings to play on, grass to lie in, or water to soak in. They also crave company, and welcome quite some species while shunning others. It’s management on the other side of the fence from Planet Coaster, sweating the small stuff rather than how many loops your inverted drop coaster can handle before your guests puke their guts up.

For most Planet Zoo players, the first port of call will be the Career Mode. This involves working through various missions with three grades which can be achieved. Complete enough challenges and you’ll unlock the next level, each of which tends to present a unique problem with needs to be overcome. Ultimately, Career Mode is an extended tutorial of sorts, with restrictions in place so how many species of animals are available to you on any one map.

So while Career Mode may be where you land first, Franchise Mode is definitely where the most time can be spent. Here, players are free to start from scratch and build to their heart’s content. The little twist here is that you can build up a multi-zoo empire with different zoos dotted around the various ecosystems of the world. There’s a full global economy which carries over from one to the other, and you can either bring your Conservation Credits and trade animals, either between your own zoos or online with other players. Be warned though that playing Franchise Mode online requires a net connection and losing this connection can prove a big hindrance in terms of lost progress.

My biggest bone of contention with Planet Coaster was reserved for the management elements. The very essence of tycoon games has always been management and economics. Staring at spreadsheets a little too long, putting more salt on the popcorn and jacking up the prices of the drinks, that sort of thing. In Planet Coaster the management part could often fall by the wayside, and this was amplified in Frontier’s next game, Jurassic World Evolution. It was a natural concern that Frontier’s management-lite focus would transfer to Planet Zoo but I’m happy to report this isn’t (entirely) the case. 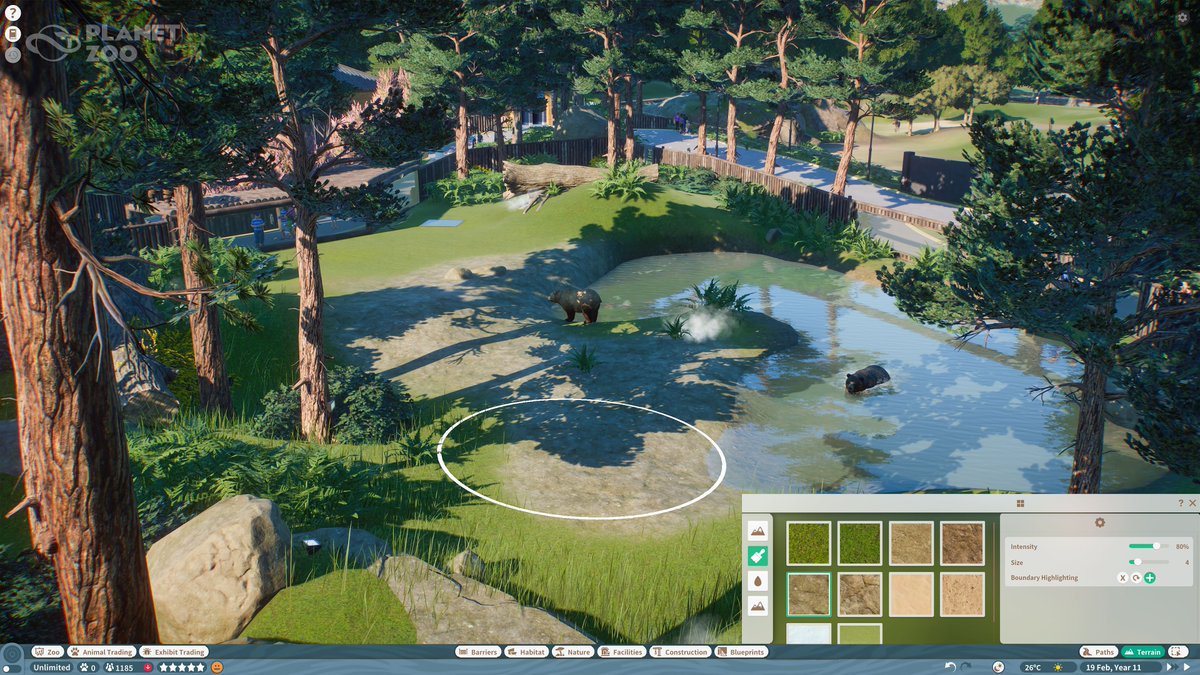 In Planet Zoo you absolutely will be balancing the books, managing expenses and income. There are also plenty of other layers to consider though, such as the welfare of the animals, genetic diversity, and even your conservation efforts. Bonus points can be awarded for housing and breeding endangered species before releasing them into the wild. This is a deep simulation of zoo management in a manner that Plant Coaster wasn’t. For those who adore micromanagement, this is your playpen. Environments can be created for animals down to minute details. There’s a certain thrill to be gained from carefully building a water and forest biome, providing a bathing pool, a little cave to sleep in at night, and then introducing your pygmo hippo to its new home.

With deeper simulation comes deeper responsibility though. Planet Zoo is not the sort of game where you can sit back on triple speed and watch the dollars roll in. Animals can get sick and die, they will fight, get hungry, vets will quit, and tigers will escape. It can be a little stressful at times, in truth, like juggling a lynx, an otter, and a bird-eating spider. 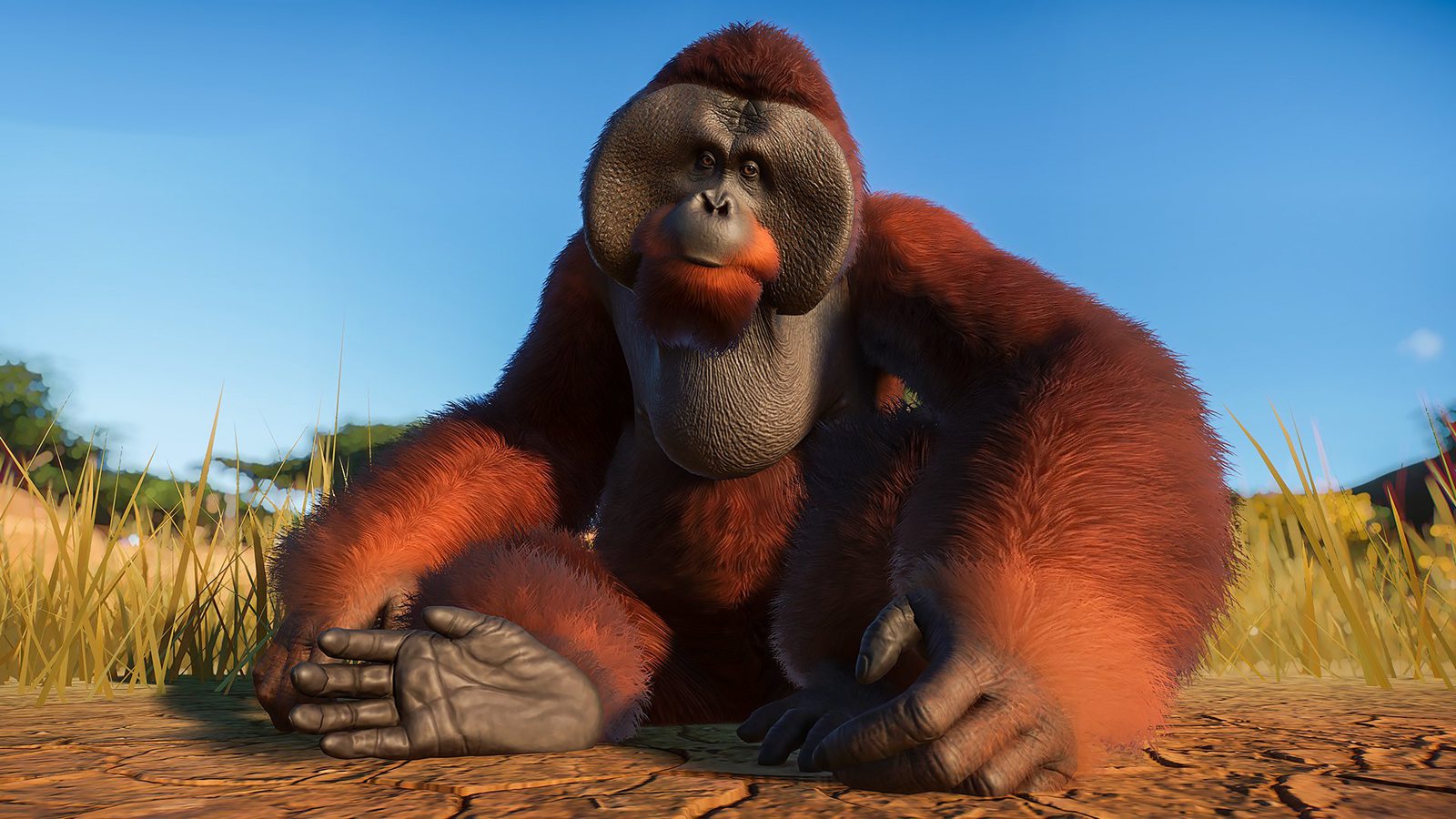 Now, a bit of a stretch this may be but I’d have loved it if it was possible to have some sort of inter-connectivity between Planet Zoo and Planet Coaster. There’s literally nothing linking these two games which feels like a real missed opportunity. I can already picture how much of a logistical nightmare it would be to have to developer a zoo and theme park management simulation running concurrently, whilst balancing the economies, but it really would have been an awesome step toward that Disney World-type all-in-one tycoon with multiple attractions such as theme parks, a zoo, and water parks. One for the future, perhaps. It’s not something I feel I can criticise Frontier for, as it would be a monstrous undertaking, but one can’t help but wonder how fantastic it will be.

What Frontier will doubtless do though is continue to add animals after launch, either as free updates or DLC. Right now there are about 70-odd animals in here and most of the big ones you’d hope for are present and correct. There are giraffes, elephants, alligators, snow leopards, gorillas, and even insects and reptiles such as cockroaches, scorpions, and iguanas. But, 70 is obviously a long way short of the huge diversity found on Earth. There’s huge potential here to keep on building it out, including marine animals and aquariums, which we’d love to see represented in an eventual expansion.

But that’s all for the future. In the here and now, Planet Zoo is the best zoo management game around and it’s not even close. It also features far stronger management systems than Frontier has ever achieved before, culminating in a fantastic package for tycoon and animal fans alike. There’s a lot to love here, even if the scope for creativity can’t hope to match Planet Coaster.