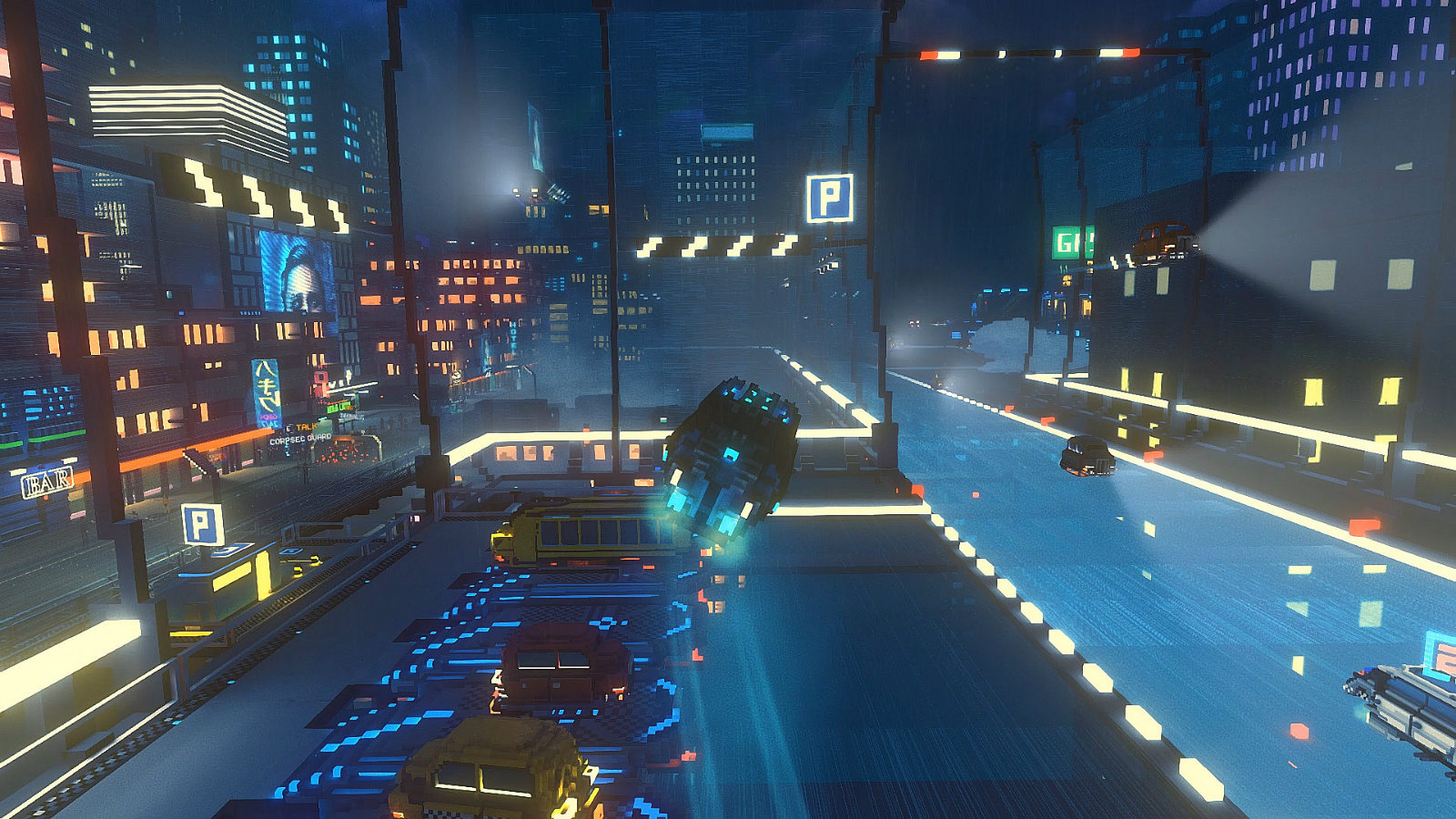 Written by Stuart Thomas on Sun, Jun 7, 2020 3:00 PM
Cloudpunk
Where does Cloudpunk rank in the list of the most demanding games?
100+
Rate this game User Rating
What's your user review score for Cloudpunk?
6
Ok Not Ok Optimisation
How well optimised is Cloudpunk for PC? 1.4
1.4

In the immortal words of the late, great Kenneth Grahame, "Believe me, my young friend, there is nothing - absolutely nothing - half so much worth doing as simply messing about in flying cars.” At least, that's what I'm pretty sure he would have said had he lived through today's sci-fi saturated world. And he'd be right. For a world where the flying car has been long held up as an aspirational symbol of human endeavour, they're taking a bloody long time to actually arrive. In the meantime, we're having to make do with the videogame equivalent.

'Cloudpunk' is a game that is heavily influenced by a few things. Most obviously, Blade Runner. Despite the relative simplicity of the graphics, the intriguing neon-and-halogen environment of the classic movie has been captured remarkably accurately. The main focus of the game - bimbling about from dystopian point a to dystopian point b in a futuristic delivery vehicle - takes almost as much influence from the early scenes in the Fifth Element, with maybe a soupcon on the urban scenes from the post-2000 Star Wars movies as well. Your sidekick, an AI modeled around the personality of a talking dog, could be influenced by the strikingly similar character Dug from the Pixar movie 'Up' - but given the story revolves around a semi-legal cyberpunk delivery driver, the influence is much more likely to be the lovable robot guard dog from Neal Stevenson's Snowcrash.

I know this is a load of chin-stroking before even describing the game, but you sort of have to know this stuff. If you're still reading, this might be a game for you. Because you sort of really, really have to love the source material to love Cloudpunk. You play as Rania, a newcomer to the city of Nivalis who is working for the sort-of-illicit Cloudpunk delivery service. The game plays like this: You drive your flying car around an atmospheric, moody cyberpunk metropolis, occasionally parking and running about on foot, collecting packages and delivering them. That's the game. There's not really a lot of what you might call action. Decisions tend to be limited to the occasional moral choice - do you deliver the ticking package to the destination to which you're being payed to deliver it, or suspect it's a bomb and safely dispose of it? Do you deliver the willing slave to his android master, or decide on his behalf that he needs to be free? These decisions are made by choosing which waypoint to visit next. And that is pretty much your involvement with the game. Fly to waypoint A or fly to waypoint B. 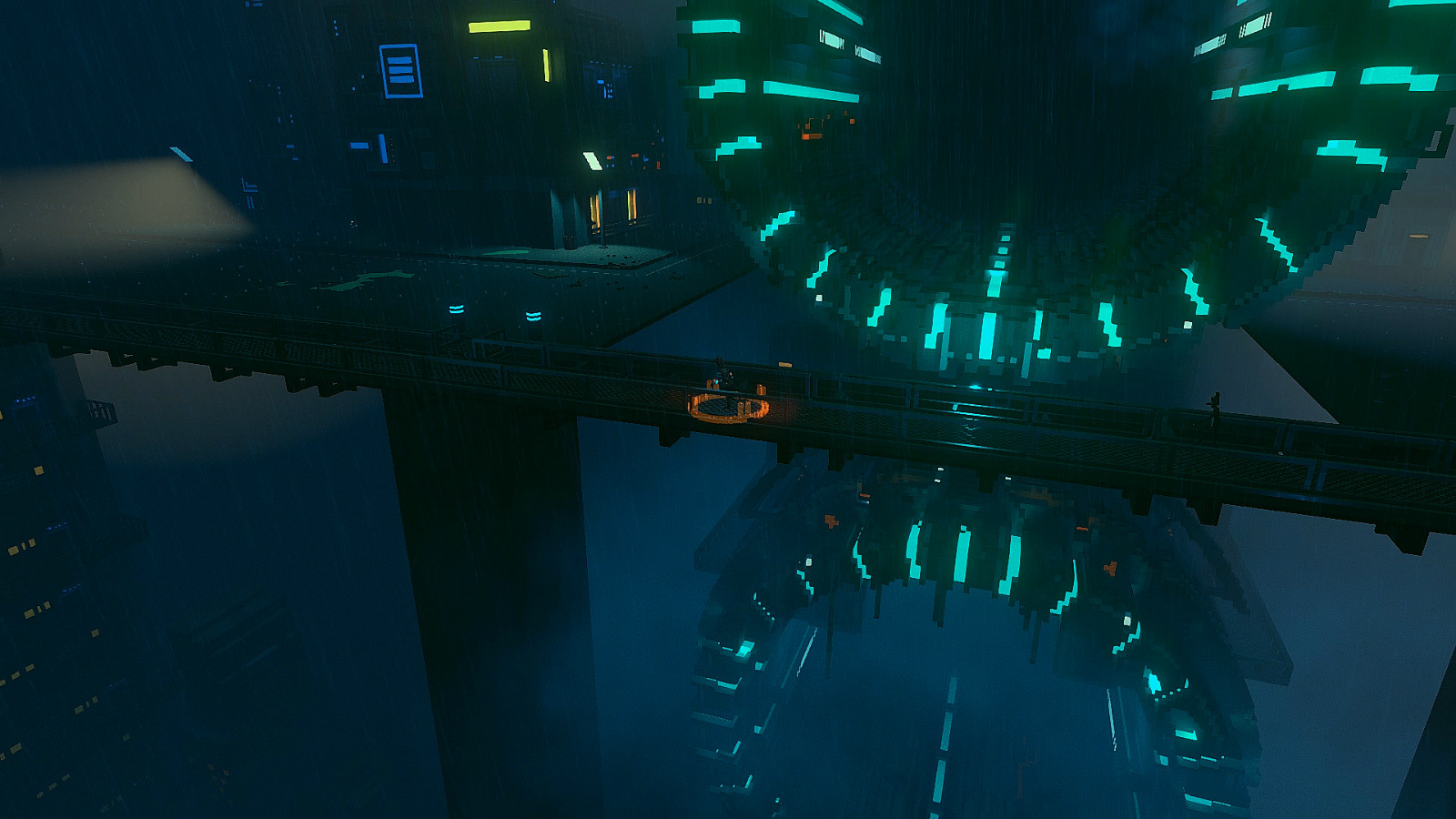 So if you're looking for innovative gameplay, I'd carry on looking. But that's not what's going to hook you. Cloudpunk is essentially a not-so-interactive storybook, populated by characters who are, for the most part, the author's fairly interesting musings on a number of traditional cyberpunk themes. The city itself is a mystery - your character seems pretty certain that the city is all that there is, despite coming from outside it. Other characters include a human-android married couple of social climbers who are forcibly gentrifying a former slum, and a dispossessed android who is trying to recreate the wishes of her friend and creator through the medium of ancient punched-cards. Much of the setting is delivered with a vague backstory that builds as the game progresses, and occasionally lifts its skirts to give an alluring glimpse of narrative ankle which is then coyly hidden away again for many hours before being referenced again. 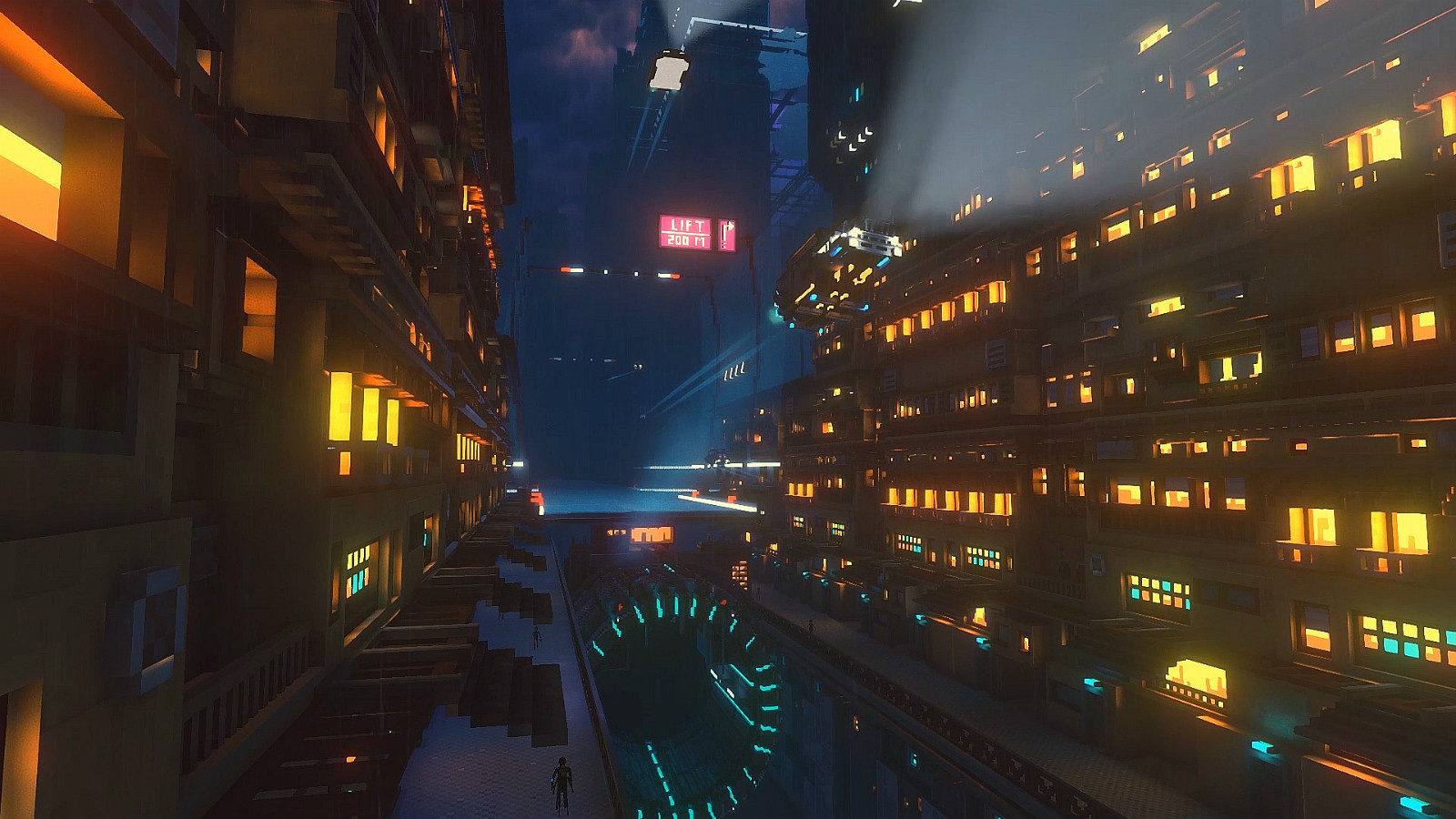 The voice acting is variable, as are the characters. Many of them are great ideas, but in some cases it's just not really the first time the archetype has been explored in a game, so while they might make you stop and think if you've not come across the ideas of, for example, androids as full citizens with rights, then they'll certainly be thought-provoking and interesting. But the core audience for a game like Cloudpunk is really likely to be gamers who are fond of the cyberpunk setting, and as such are going to have encountered a lot of the concepts before. This is a minor gripe - certainly there are a host of colourful and intriguing characters that completely disprove this.

Props to the small team for really doing a whole lot with a little graphically. The rain never seems to let up, and the neon glow of the noodle stands shimmer on the trash-strewn alleys, and the smoky canyons between the seemingly-endless skyscrapers adds a feeling of vastness to the city. Really though, when you get down to it, Cloudpunk seems more like a straightforward interactive novel than it does a really fleshed-out game. It takes the first part of the 'go anywhere, do anything' sandbox model and does it very well. It just doesn't really deliver on the 'do anything' part all that well.

I might pick this up to mess about with. Looks like it could be a bit of fun!

Thank you for the review.

I enjoyed reading it.