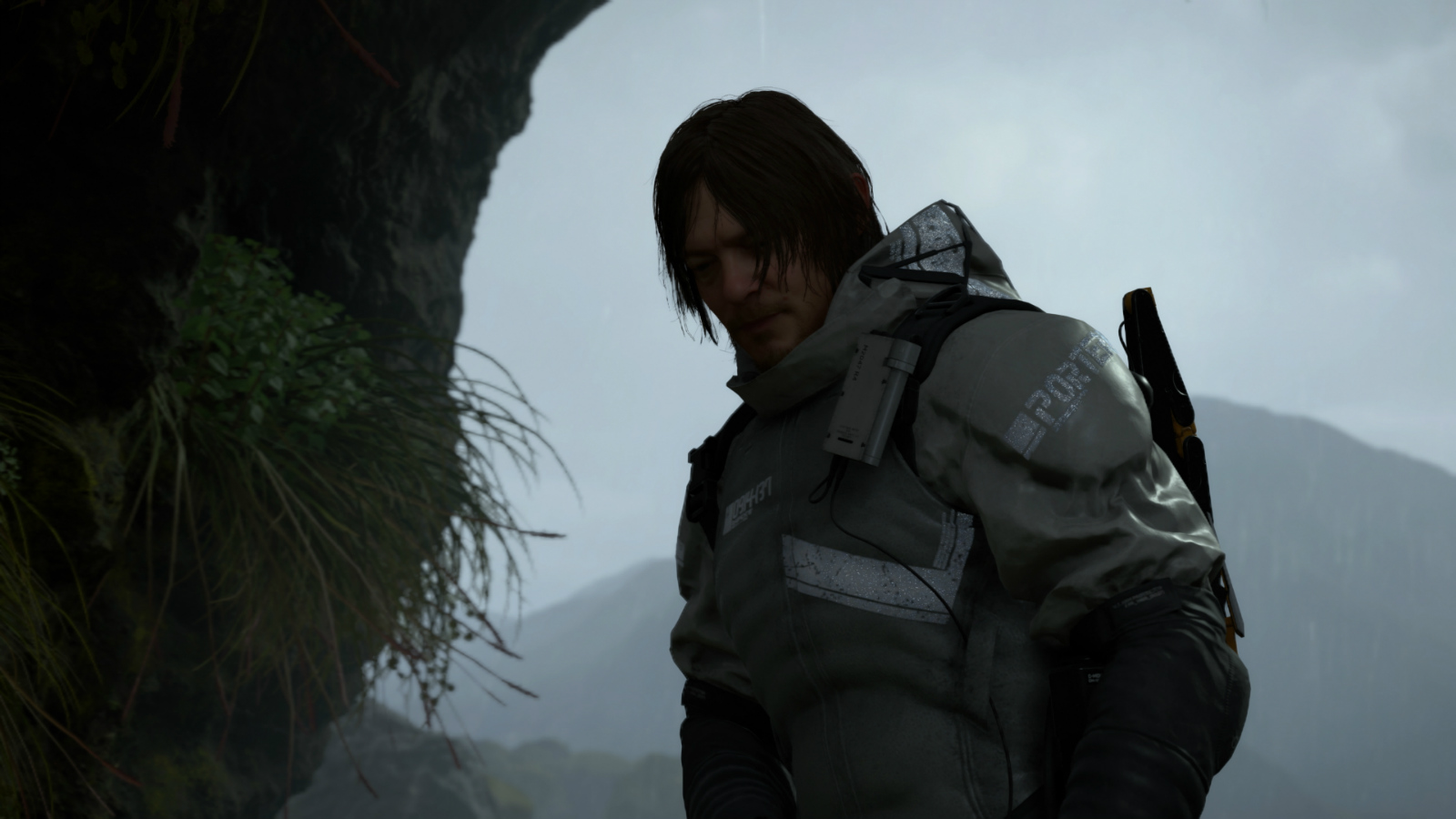 Hideo Kojima’s latest venture is a tough one to describe. In short, it’s a game about connection, and uniting communities to create a better world. Full of the bells and whistles of a Kojima game, Death Stranding is a fresh and unique experience, but one that may divide players and only appeal to a smaller niche audience. It also walks a fine line between an over-the-top arthouse David Lynch-ian feel, and a deeply emotional and cinematic experience.

It’s hard to describe what Death Stranding is, least of which the actual story. The main plot is simple though: America is divided - and stranded (heh) - from each other, and it’s up to you, Sam Porter Bridges, to reconnect the communities that have been disconnected from each other. How did America become like this you ask? That’s something which you’ll discover over the course of your adventure, slowly, but Kojima drips in enough information every now and then to keep you interested into how exactly this world became the way it is.

To put it simply, a cataclysmic event started this whole thing: the Death Stranding as everyone calls it. This event brought the arrival of ghost-like creatures called BT’s, and the mysterious weather effect known as Timefall, which accelerates the passage of time on any object it touches. Many communities retreated to walled-off cities, and after being cut off from one another, they now require the services of Porters, people who are tasked to deliver objects and supplies between each settlement.

It’s a dangerous job, and one that you find yourself in as renowned Porter Sam Bridges, who is tasked by the president of America to reconnect each isolated community. The journey is long; all the way from the East coast to the West coast, and along the way you’ll come across small outposts, or large cities, where you reconnect them to the Chiral Network - a very fancy internet, so to speak.

It can be deeply emotional at times, depending on how immersed you let yourself get. If you want the full experience that Death Stranding has to offer; then strap your headphones on, take a few hours to deliver some packages, and let yourself be taken on a mystical journey.

So now that you’re caught up on the story, what’s the actual gameplay like? Well that’s a bit easier to describe. You might have heard of the “literal walking simulator” comparison, and it pretty much is just that: get from A to B carrying an assortment of packages and that’s pretty much the bulk of it. And whilst it may sound boring, Death Stranding manages to make it surprisingly engaging.

It’s not as easy as walking from one destination to the other, there’s obstacles in the way: treacherous waters, dangerous terrain, mountains, or even areas claimed by ravaging communities of ex-porters-gone-mad called “Mules”. 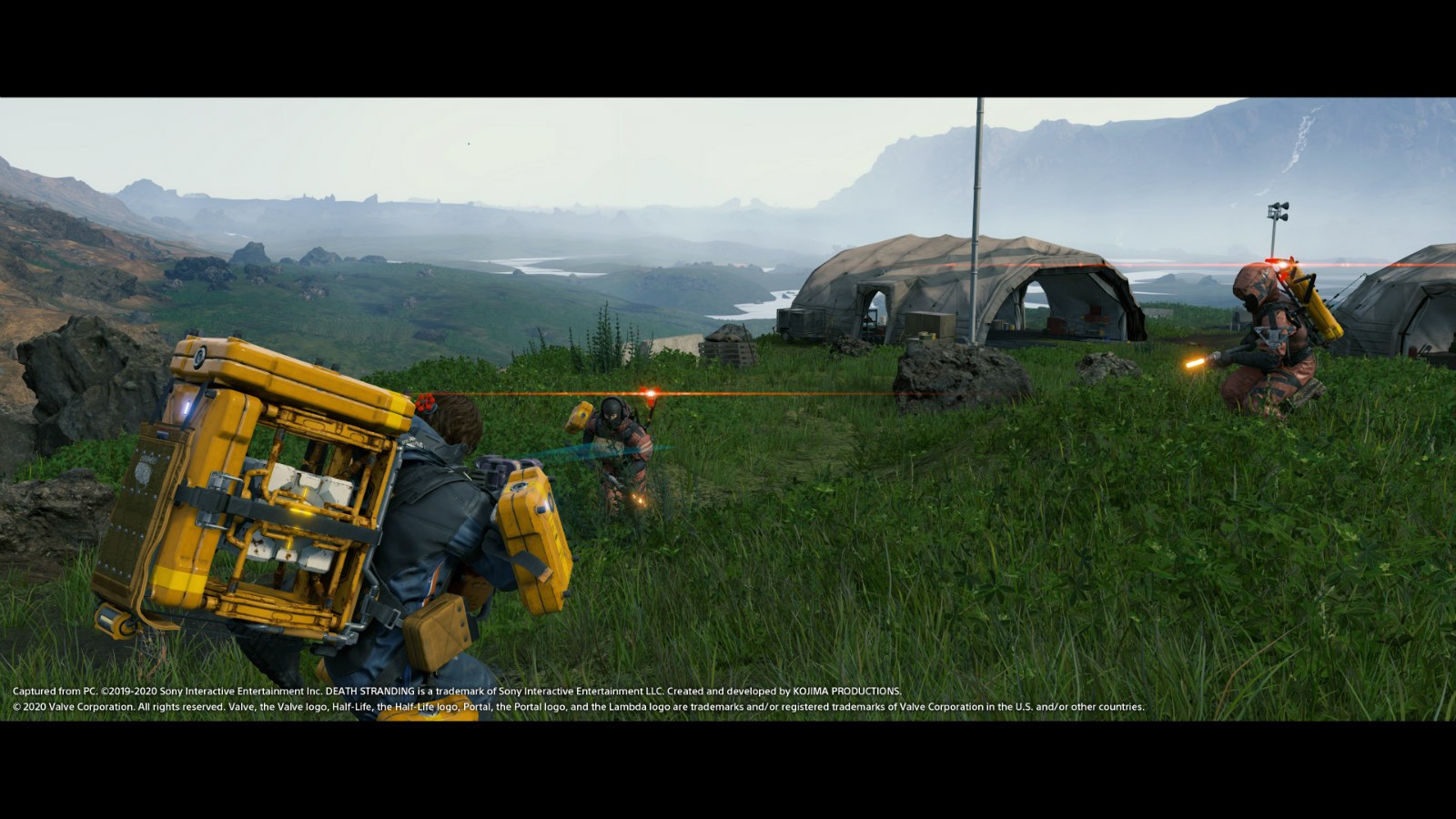 The gameplay consists of you taking on an order, optimizing your loadout, and then heading out into the great outdoors. Mountain in your way? Climb over it. Steep drop ahead? Stick a pole in the ground and descend using a rope. There are obstacles and there are tools to use to overcome those obstacles. It’s as much a puzzler and strategy as it is a walking simulator.

And managing those resources is where a lot of the strategy comes in; putting a ladder down requires materials, same as any other useful tool at your disposal. Outposts and communities have a limited number of resources, and you’ll have to find more in the wild in the form of dropped cargo if you ever run out.

After playing for a while, you’ll get access to more advanced structures: a bike helps you traverse the terrain faster, making deliveries at quickened speeds. But the battery drains out quickly and so you’ll need to build recharge stations if a certain location doesn’t have one yet. Larger structures like bridges and roads are attached to a power grid, which allows you to traverse longer distances without draining the battery.

The unique thing here is that these structures and objects can be placed around the world and appear in other players’ games, or vice versa with other players’ structures appearing in yours. It’s a lot like Dark Souls where the idea of multiple players in a shared world is baked into the world’s story; these structures are simply left by other porters other than yourself making deliveries to other communities. It just works. 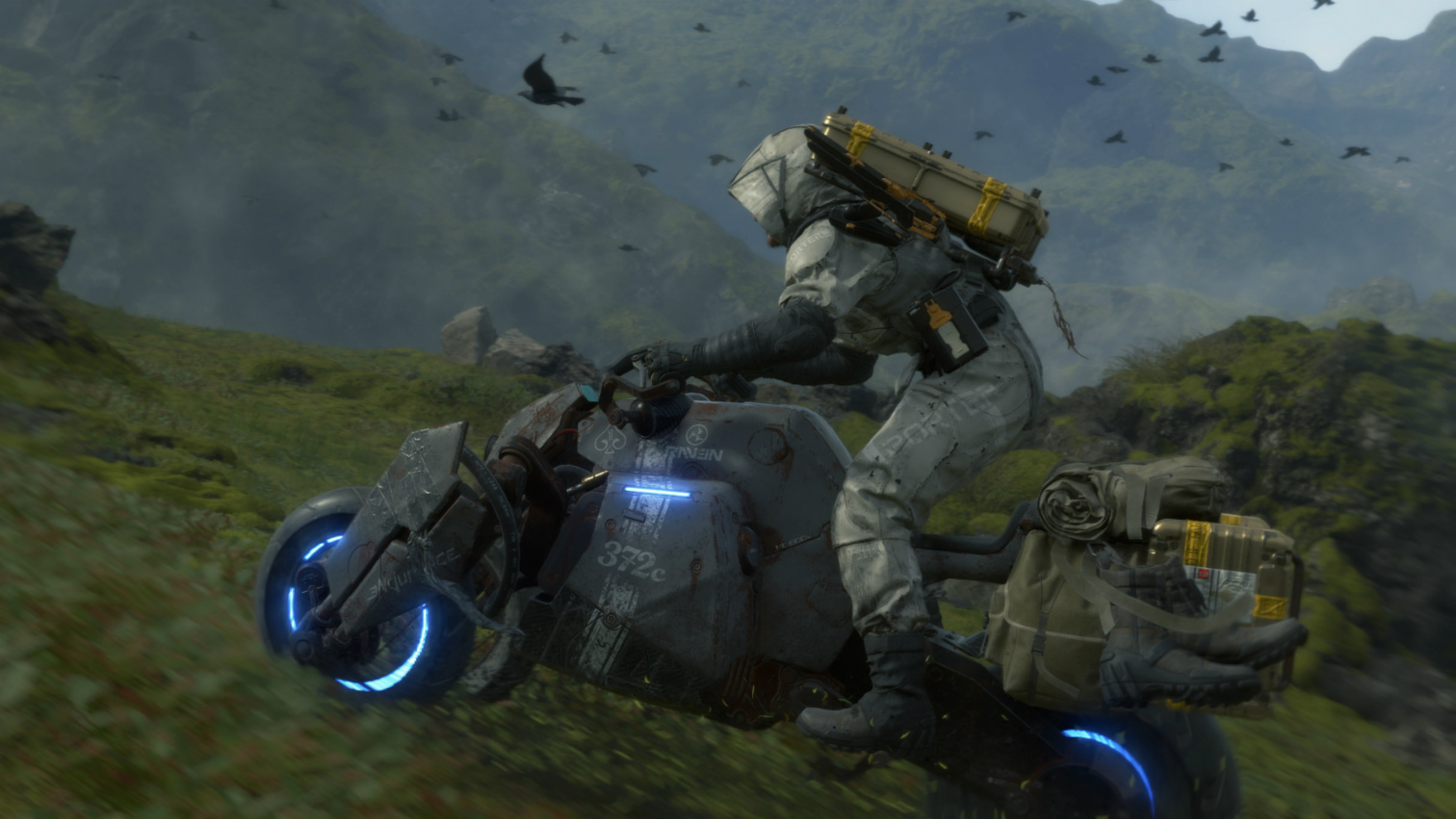 Though, as a single player fan myself I played a lot in offline mode to get a sense if the experience was still the same, and… It wasn’t. Whilst the story and gameplay is the exact same, you lose out on a lot of that sense of community and teamwork, it also becomes a little harder as you’ll often have to build your own large structures for yourself, which requires more resources than if you were connected online and with other players who also contributed their own resources. You won’t miss out on much by playing offline, but just know that the experience is a lot better when connected to the internet.

The first few hours of the game can be slow, very slow, as the world, it’s characters, and the main story struggle to kickstart the adventure whilst also providing necessary backstory and world-building. The tutorial lasts a long time as you get to grips with all the mechanics and features. Cutscenes can range from 5 to 30 minutes as per Kojima’s style, but the engaging and also often-jarring performances by the cast will keep you invested, even if it’s obvious that Kojima just wanted to stick in a few of his friends in as cameos, minor or major.

Death Stranding is also very scary, it can be truly terrifying at times even. Adding another genre to the soup of multi-genres that gives this game it’s unique feel. At certain moments you will need to traverse across BT territory, forcing you to stealth (or speed) your way through these small areas. A loud robotic arm that’s strapped to your shoulder claps in the direction of the nearest BT, getting faster and louder as you get closer. These are incredibly tense moments at times, because one false move can lead you into a chase sequence that can result in you getting caught in a strange dimensional rift, one that floods a large area with blackish oil-like liquid and spawns a large Lovecraftian monster. 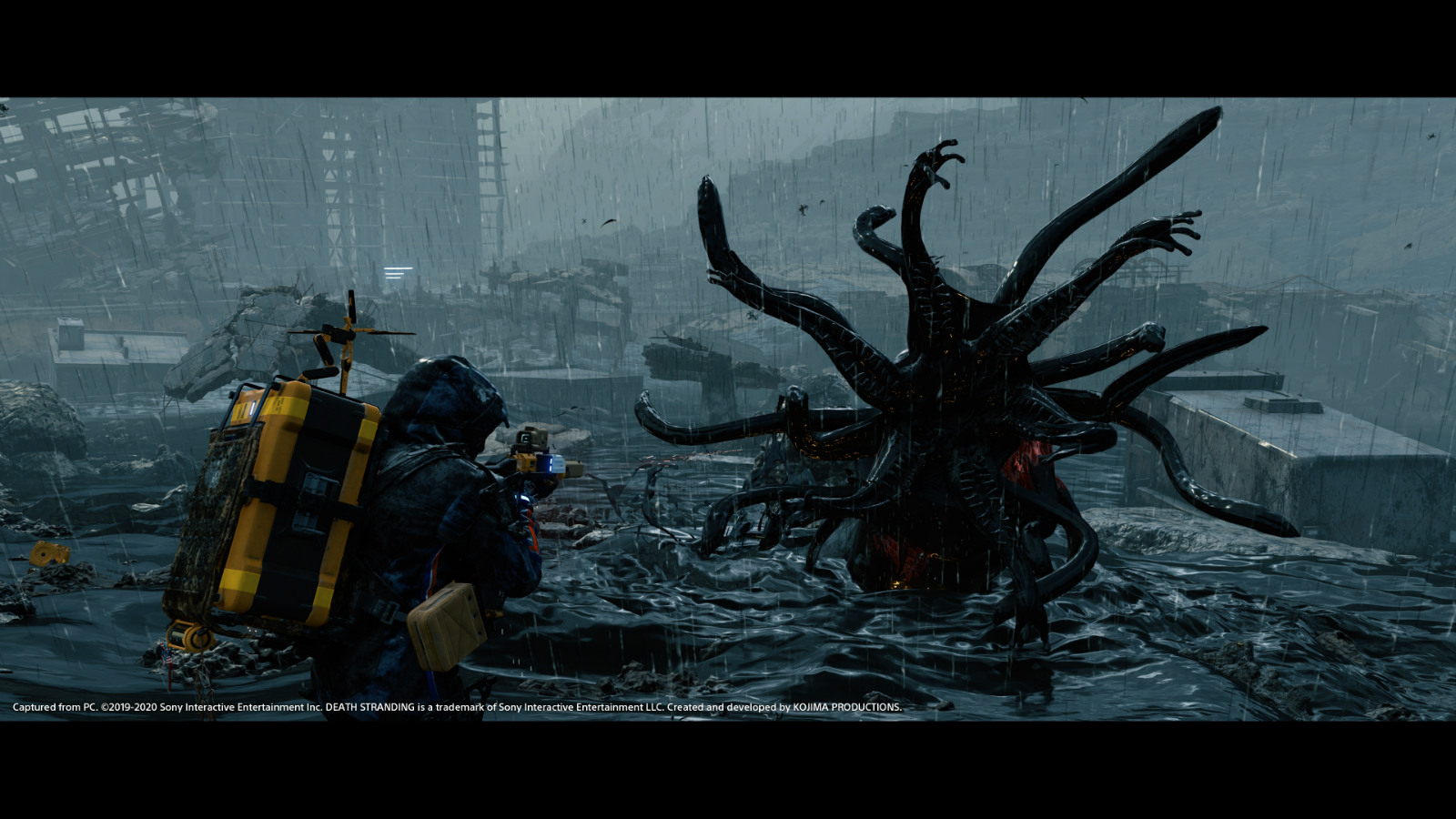 There are tools you can use to fight off these BTs though, with various weapons having different effects. Those moments when you fight the large Lovecraftian monsters are the game’s boss fights, but depending on how well you stealth your way through BT territory, you may never encounter most of them. You can also escape if you manage to get far enough away, without any damage to the landscape or your cargo.

There’s a lot to like about Death Stranding, but there’s also a lot to criticize. It will definitely appeal to some like myself, but also turn off a lot of others. If a transporting, meditative journey sounds like your jam, then Death Stranding may very well be for you. If you’re looking for something a lot quicker, action-packed and exciting, then you may want to play something else. If anything that I have mentioned above sounds appealing to you, I highly recommend that you give it a chance.

Death Stranding is a wholly unique and fresh experience that will surely appeal to only a few, and the surprisingly engaging experience of essentially being a delivery man in the post-apocalypse is hypnotizing. Kojima’s standout weird and wacky writing is left unhinged here, and that can excite some or terrify others, but the truth is that Death Stranding on PC is definitely the ultimate version of such a very, very strange game.

Would you say that fans of games like Euro Truck Simulator will enjoy this?

It's got soooome of the same appeal, for sure, particularly in the front half of the game. The superfluous combat can get in the way though