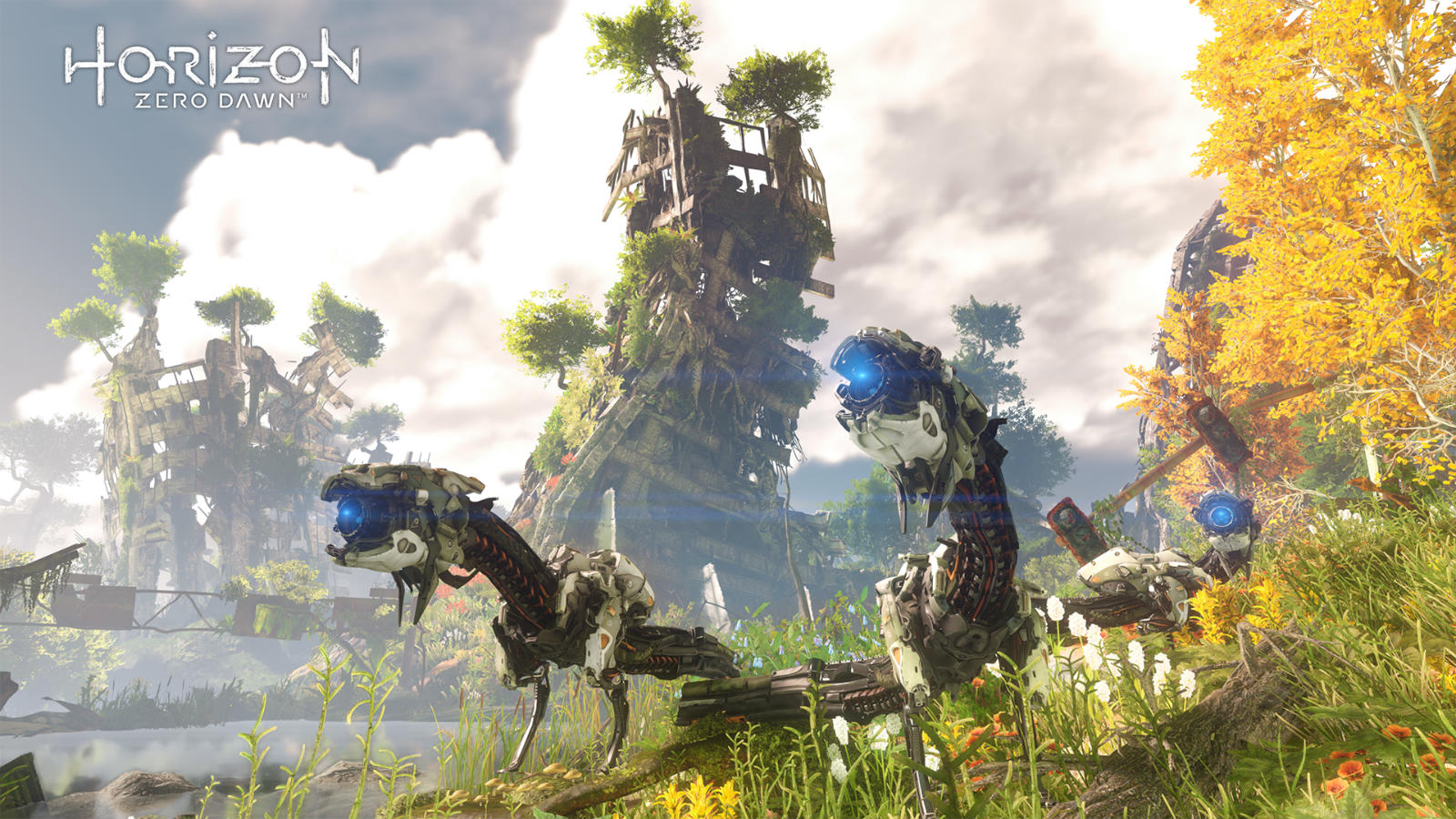 How on earth do you even begin to describe Horizon Zero Dawn? I’ll do my best, but if you somehow haven’t heard of it already then it may start to sound a bit ridiculous. It’s the far future, and nature has reclaimed our once-thriving civilization. It’s an apocalyptic setting, but not the dark ashen wastelands we are privy to, instead Horizon: Zero Dawn presents a beautiful world full of natural wonders, colour, and life, mechanical or otherwise.

Humanity has essentially been thrown back into the stone age, albeit now with rather primitive versions of future technologies. Tribes exist, along with their own religious beliefs, and everyone is dressed like they’re auditioning for Conan the Barbarian. Yet outside their wooden walls and wooden gates, lies a world full of new age dinosaurs; ones made of metal with electricity coursing through their wirey-veins.

You play as Aloy, an outcast of the Nora tribe at birth, who wishes only to be accepted by others and find out who her true mother is. Her eventual acceptance, and inevitable promotion through the tribe, is the typical underdog story that will keep you rooting for her to succeed. And finding out who her mother is uncovers more secrets and questions than answers.

It’s a great setup, one that captures a very fresh and unique take on the apocalypse scenario. I mean robo-dinosaurs are a thing in this world, what more is there to say? But marvelling at the world and its inhabitants is only half the fun in Horizon Zero Dawn, as most of the time you’ll be hunting down these beasts in tense battle scenarios, or clearing out encampments of enemies, or delving into the many secrets this new world offers.

There’s a lot to do in HZD, it has the typical open-world sandbox traits you’d expect to find when we were at the peak of such games coming out. There’s hundreds of icons on the map: towers to find that reveal landmarks and remove the fog of war, bandit camps to take over, challenges to complete, quests to uncover, and plenty of secrets just begging to be found.

But the strength of it all comes from the clear star of this game: the machines. There are dozens of new robotic creatures of all shapes and sizes to discover in the world, each with their own strengths and weakness and style. Hunting them just feels really good, and taking on a much bigger enemy can result in some really tense scenarios where you juggle between various types of weapons and abilities to take them down. These can involve arrows, bombs, tripwires etc. and the most deadly foes will require the most amount of preparation before engaging. 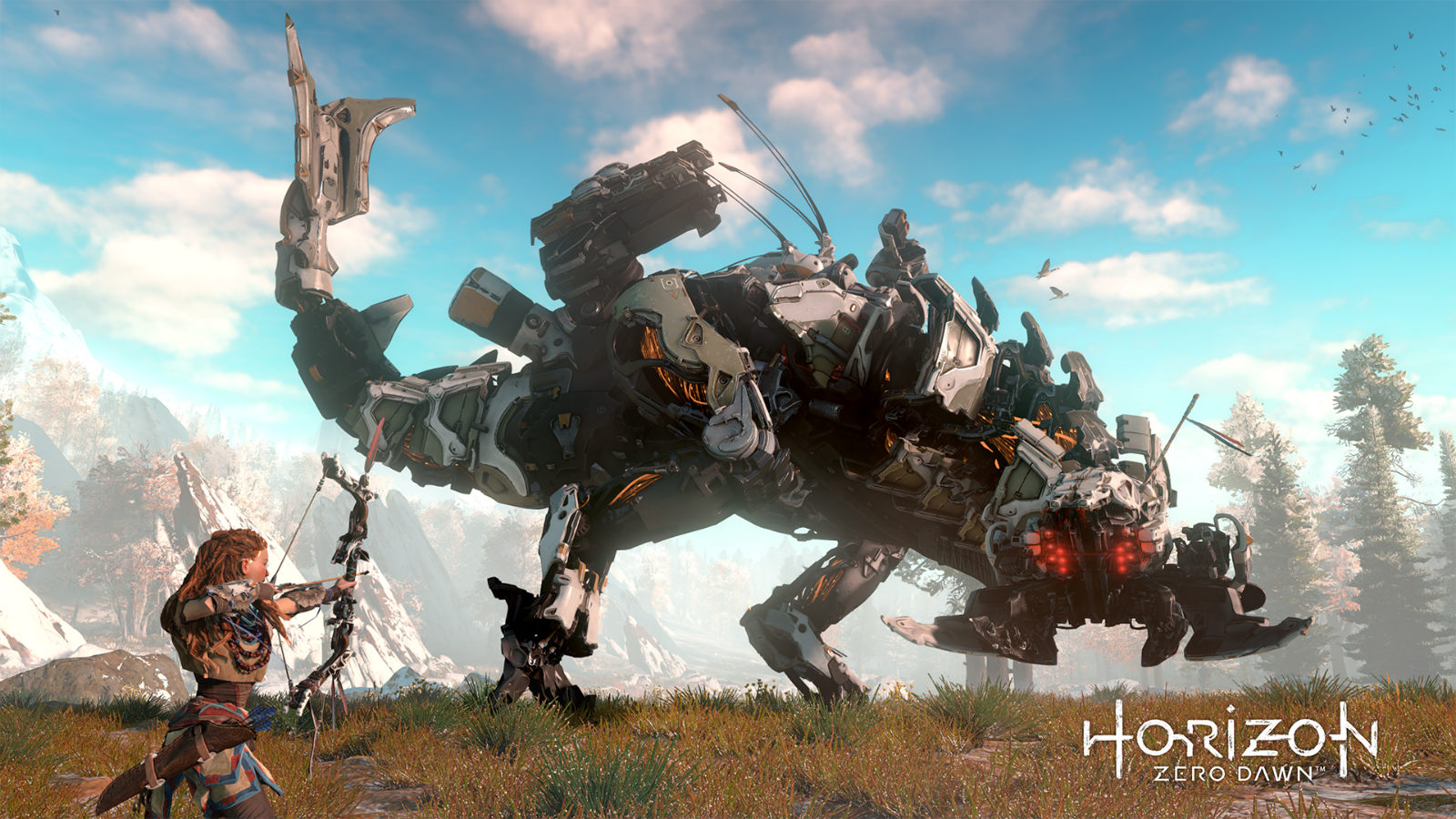 The typical bandit camps unfortunately don’t get the same kind of treatment. Either take out your bow and stealthily overthrow the village with silent takedowns and discrete headshots, or go in bows blazing shooting flammable barrels and killing all the enemies before they have a chance to call for reinforcements. It’s a very familiar setup, but luckily they aren’t as much of a focus here.

Despite sharing similarities with so many other games, Horizon gets the Tarantinoesque feel of seeming almost wholly original because of its fresh design and unique take on the armageddon-style world event.

The story, whilst cliche at times, is a thrilling ride to say the least. It’s refreshing to see a story told with new perspectives, without the need for world ending stakes to be constantly present. It touches on so many themes and topics that are not normally seen in games of this time. 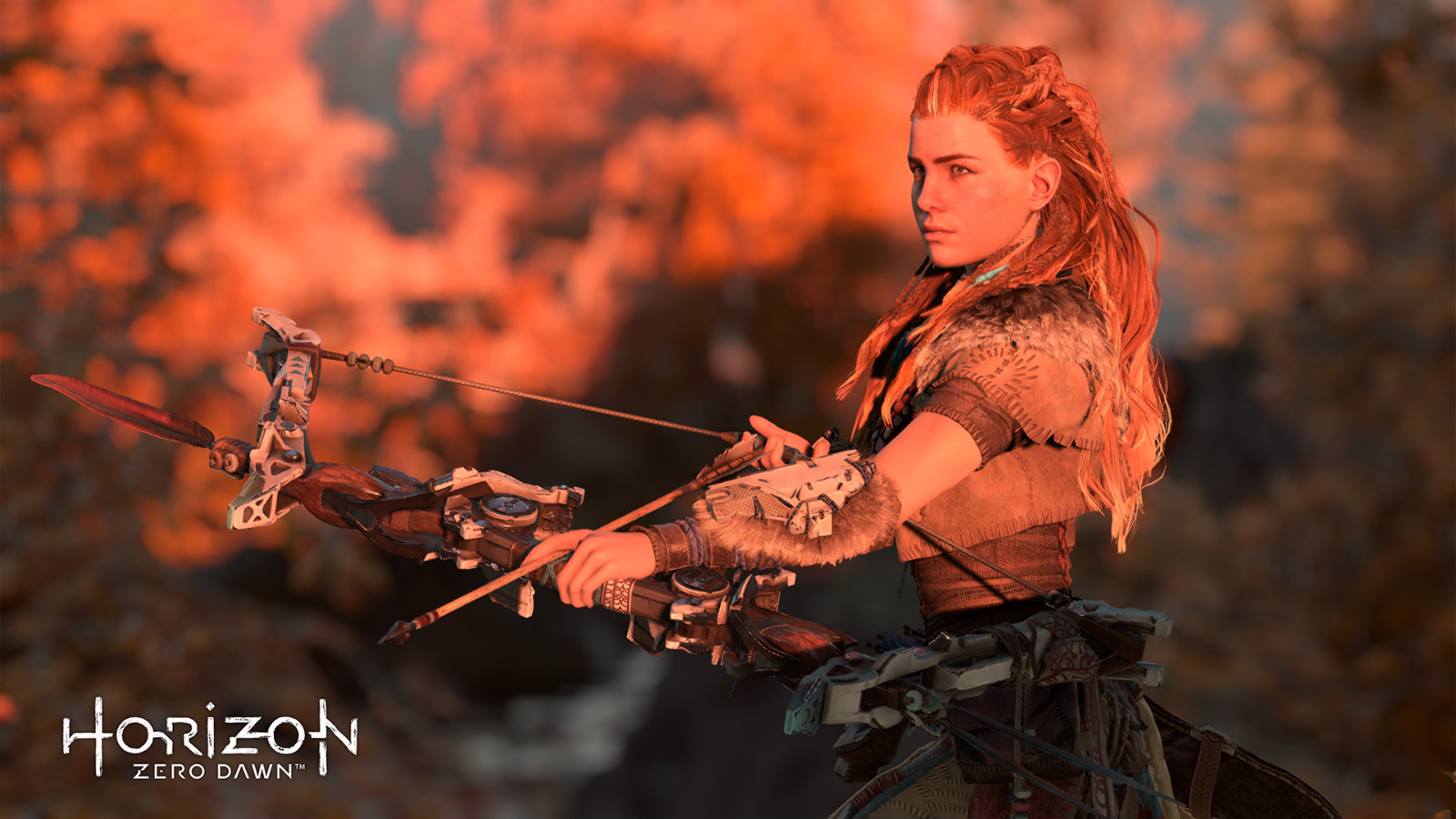 Discovery is the best word I would use to describe Horizon ZD as a whole; wherever you go, whatever you do, there is always something new to discover, either about yourself, the characters around you, or of the world itself. That feeling will carry you through the vast valleys, into the array of varied landscapes and beyond. You will feel like a true explorer at times, like stepping on untouched soil and discovering the wonders of a land unseen.

It’s unfortunate then that some of the dialogue can be rather poor at times, with unnecessary uses of exposition and on-the-nose dialogue that will make you want to rip your ears off sometimes. Luckily they come few and far between, with the overall story mostly carrying you through the unnatural conversations. Aloy also talks most of the time like her face is made of plastic, rarely bringing out her emotions during conversation when talking to other NPCs.

The result is a mixed bag of feelings, but one that is happily overshadowed by all the great moments the story unveils and truly thrilling gameplay. There is, of course, a major elephant in the room that came with the release of Horizon Zero Dawn... 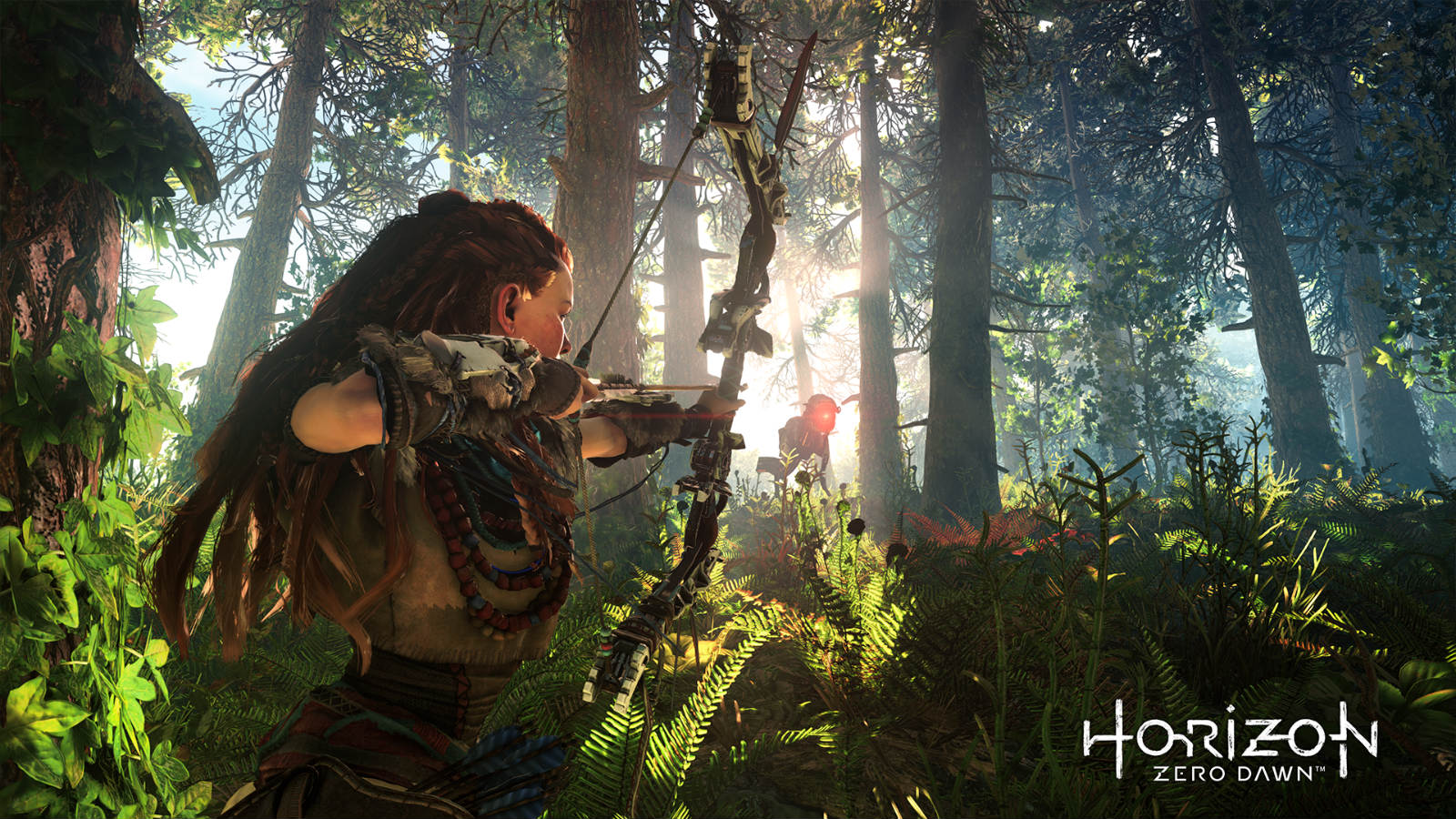 Sony has recently been getting into the whole PC business, bringing some of the most beloved console exclusives to the PC platform. The latest release, Horizon Zero Dawn, just came out the other day, and whilst it may share the same engine as another recent console exclusive that came to the PC, Horizon: Zero Dawn unfortunately does not share the same technical marvels that Death Stranding had.

Though I have heard that performance is rather varied across the board: some run it perfectly, while others encounter major performance issues or bugs. I definitely noticed something wasn’t right on my system, but nevertheless I still had a great time on my journey with Aloy in this world. It’s just a shame that the release couldn’t be as widely celebrated as it might have been had the port gone flawlessly.

Despite the glaring flaws in Horizon Zero Dawn upon release, and the occasionally shoddy dialogue and uninspired activities, what shines through are the major moments of awe-inspiring wonder and childlike discovery. The overarching story is also a joy to unravel, touching on some major themes and topics still unseen in many games today. And the standout star of the show is of course the mechanical creatures, who always steal the scene no matter the occasion.

No game is better than a 7 in my book if it runs terribly. Yes, BOTW is a 7 as well.

Played 11 hours so far and the only small gripe I've had is that using a controller with the standard scheme has the Bow draw move and the Melee heavy attack move on the same right trigger which has resulted in a few accidental deaths when things have gotten hectic. I haven't had any crashes yet and the only problems I've had graphics wise are when I was experimenting with Nvidia Control Panel.