Written by Stuart Thomas on Sun, Sep 6, 2020 1:00 PM
Struggling
Where does Struggling rank in the list of the most demanding games?
100+
Rate this game User Rating
What's your user review score for Struggling?
8.67
Ok Not Ok Optimisation
How well optimised is Struggling for PC? 10
10

A time of Greek heroes.

The power of those five words conjures images of muscle bound, oiled up hulks, often wrestling each other (normally naked) or throwing javelins the distance of a dozen football pitches.

Look up there at that image, that's some of them, right? Snatching arrows from the air, likely tanned from parading their muscles around in the sun all the time.

Struggling starts you off as Hector and Achilles, a couple of heroes prophesied for greatness. The problem is they turned up a few hundred years too late, and were likely an experiment gone wrong: instead of two bronzed Adonises, what arrives is a horrible amorphic fleshy blob with two faces.

Ahh look, there they are below. Magnificent, right? That's you, that is. 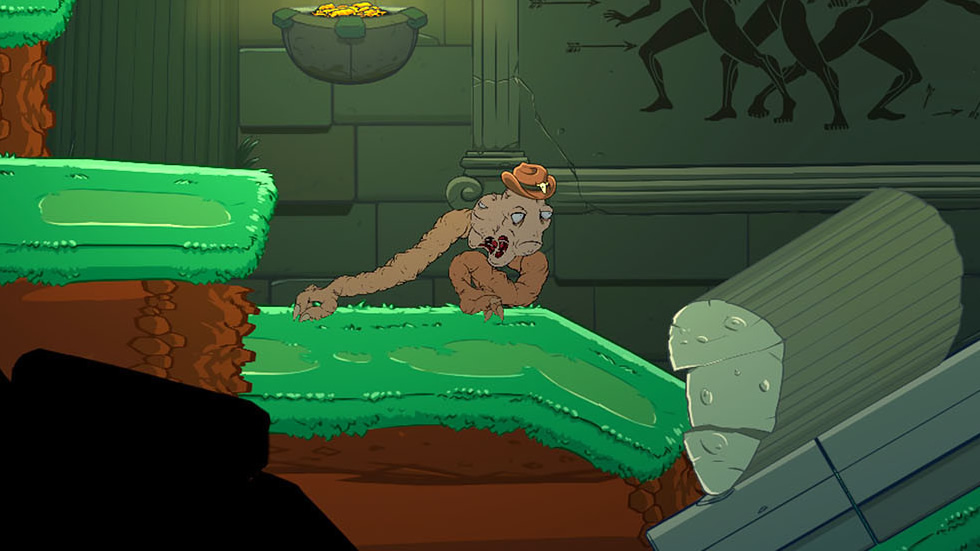 The player controls the two mutated arm-like appendages that sprout from your head. Fondling and gripping the environment for any purchase, you drag your agonized form painfully through the 2D side scrolling world, using the left gamepad stick for one arm and the right joypad stick for the other. This seemingly simple action of reaching one arm forward to grab the ground is awkward to do, maybe impossible to master. But ingeniously the game always makes you feel like you are just getting the hang of it. As you manage to beat the physics and get an arm to slap a bit of the environment you pull the corresponding trigger and its hand grips and you can pull the mashed heads towards it, providing of course you remember to release the grip of the other hand that might be dangling you from a ceiling.

Battling yourself and your character’s physics is at worst appealingly challenging and at best frustratingly hilarious, as you build your own odd rhythm, struggling (heh) to reach the next checkpoint. Fall into a vat of acid or get eaten by a mutated giant fleshworm and you respawn back to the last checkpoint to retry throwing your head past the obstacle in some other imaginative way.

Can you guess what they have included to cleverly extend the game’s charm and appeal? It’s certainly in vogue at the moment. You can invite a friend (for free, so they don't have to own the game themselves) to join you in your struggles. Although that's not the bit I really refer to, your friend doesn't spawn as another hero abomination, instead they take control of one of the arms, so you control one each. It’s a hilarious mess as you attempt to coordinate your movements. You will definitely need voip to communicate your suggestions or abuse to one another, if you are not in the same location. 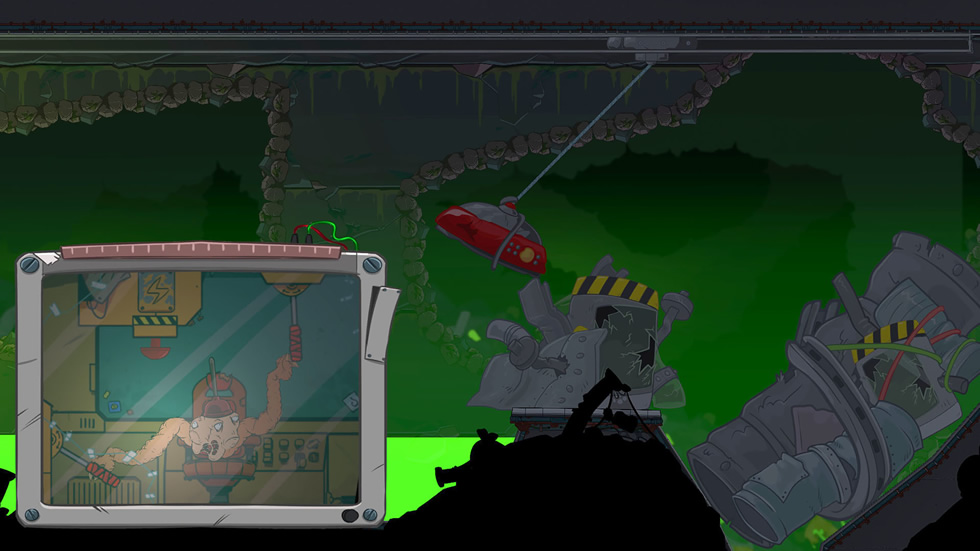 Struggling is a high-production, well supported indie title, with a great soundtrack. The in-game effects are cleverly woven throughout as well, further improving on the janky humour. For example, as you get in range of a secret area, the protagonists quietly whisper, “seeeecret?”, getting more excited the closer you get to the goal. Also, a couple of times I have left the quirky, upbeat menu music playing in the background, while not playing the game.

The art style is polished, and would likely have old-school gamers feeling nostalgic for how classic side-scrollers used to look “back in our day”, even though they didn't look as good as this. Currently priced at around the $15 mark, so perhaps consider it this way: invite your friends around for an evening of fun, and if they bring the drinks you’ll have your game investment returned in a couple of Struggling sessions. Its also on the Nintendo Switch and based on these controls it would be very much at home there as well.

Struggling has imaginative indie talent sloshing throughout. Plus, you can tell it's got a big publisher behind it, believing in its charm and uniqueness.

Had fun reading the review.