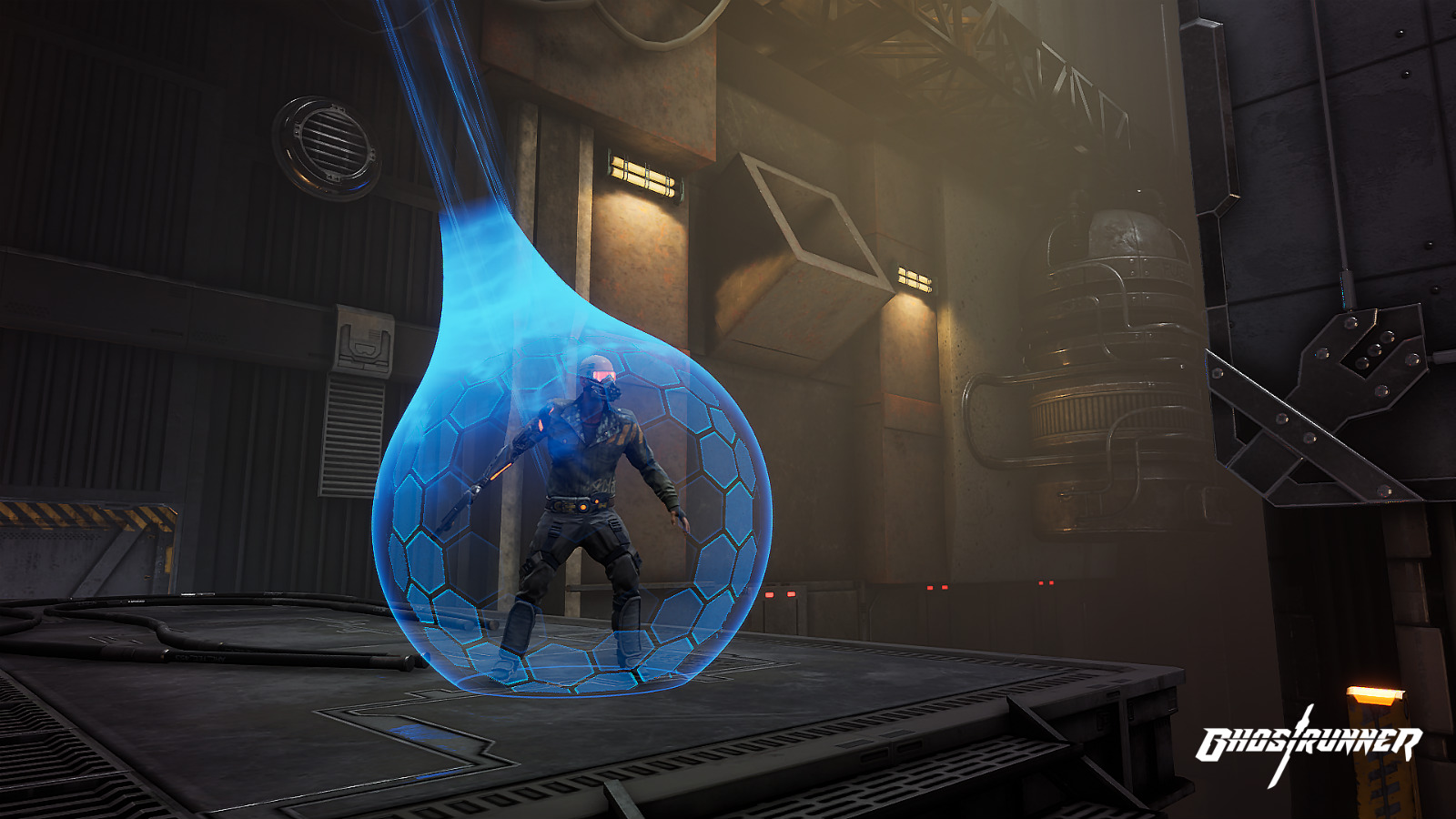 Written by Chad Norton on Mon, Oct 26, 2020 2:20 PM
Ghostrunner
Where does Ghostrunner rank in the list of the most demanding games?
100+
Rate this game User Rating
What's your user review score for Ghostrunner?
8
Ok Not Ok Optimisation
How well optimised is Ghostrunner for PC? 8.4
8.4

Ghostrunner is a first-person platforming slasher set in a dystopian Cyberpunk-themed world, it's the sort of game that you can easily pick up whenever you want to, but hard to put back down once you’ve done so. It’s also pretty hard most of the time, and will keep you coming back for more until the credits roll.

Back when the demo for Ghostrunner came out, we gave our first impressions of the demo on Steam, which was pretty positive. Back then we called it a mix between Mirror’s Edge and Hotline Miami, and I’m happy to say that analogy sticks throughout the entire game.

There’s a dozen or so levels in Ghostrunner, and each new level will present new challenges and obstacles to overcome. At first you’ll start off with some basic enemies that can be easily taken out with some good maneuverability or a quick use of the Sensory Boost. Towards the later levels you’ll be presented with a multitude of different enemies that each require different tactics to dispatch - like first destroying an orb that grants a shield to nearby enemies - and often requires some quick thinking to establish a proper kill order.

You see, it’s like a game of chess, only much faster, much bloodier, and a booming synthwave soundtrack bellowing in your ears. Strategies are required to correctly identify and take out foes, often requiring multiple attempts to find the best route as most combat situations will present you with alternate paths to take to optimize your murder spree.

It’s also pretty hard, like a lot of the time. I guess a good comparison here would be Dark Souls (I know, I know, another comparison of a hard game to Dark Souls, but hear me out okay?); at some point in Dark Souls, the game stops becoming really difficult and you start to adapt to the game’s various mechanics. Instead of trying to play the game your way, you’re playing the way the game wants you to play.

And it's the same with Ghostrunner, at a certain point you become adept at the game’s systems, and it all begins to flow into a beautiful tapestry of parkour and violence. It’s wonderfully beautiful in all the right ways and chaotically symphonic in its depiction of combat.

It's also a stunning game, set in a fictional sprawling skyscraper called Dharam Tower and often taking you through the back alleys and industrial sectors or even across the rooftops of some residential districts. It has some great scenery and certainly scratches that Cyberpunk itch that I'm sure a lot of us have right now. 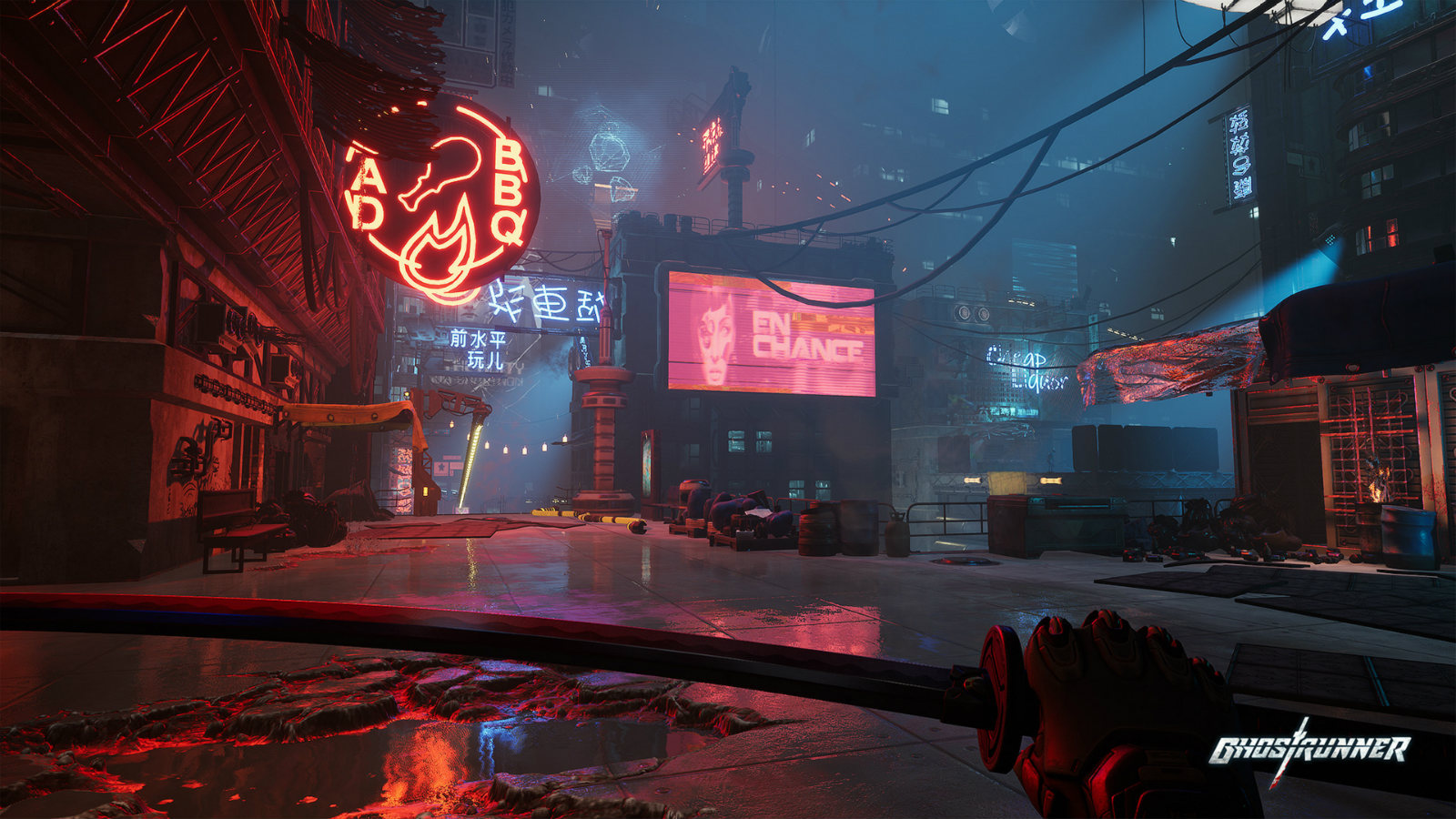 There was also a nice surprise to see that Ghostrunner also includes various abilities your character can use in various situations: blinking will dash forward in a line in front of you, slicing through multiple enemies in your way. Tempest will initiate a kinetic blast that can knock back enemies and even deflect projectiles. Surge will create a sweeping blast that can kill multiple enemies etc.

You can also upgrade yourself and these abilities throughout the campaign, but Ghostrunner does this so well with a sort of Tetris-style mini-game. New abilities and upgrades are shaped after various tetris-style blocks, which you must then fit into a separate grid on the side. You’ll even sometimes have to sacrifice some abilities and/or upgrades to insert new ones, as the bloks simply won’t fit the right way. Your available space to place these tetris blocks also increases as you discover new abilities, allowing you to add more powerful upgrades or create new synergies not possible before.

It's a great feature that takes a very unique and fresh approach to the typical RPG upgrade systems, and almost feels like its own mini-game aside from the main game. It's fun, and provides some more precarious thought into your specific character build other than “I want this new ability”.

Boss fights are also great, often relying on various different mechanics you have learned throughout the game to properly complete. They'll test your mettle and your patience, as some of them can be brutally difficult at times. Though I was a little disappointed to see only 3 in the game at first, I quickly realized that each one tests a different skill and will require you to be at your best the entire time. It's not much, but it's enough, and each one will keep you retrying again and again until you perfect the mechanics. 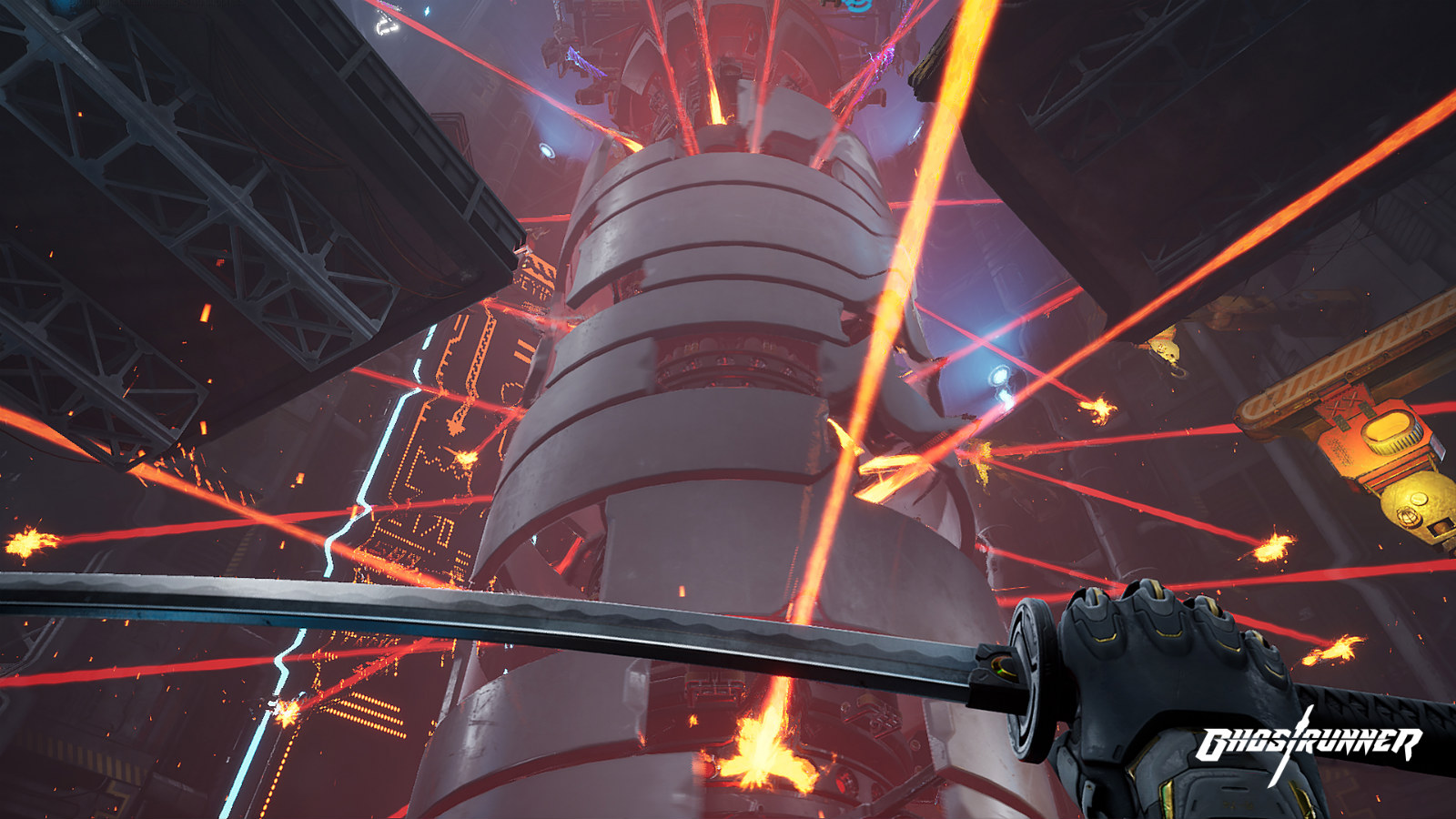 In terms of story though, there's nothing really to write home about here. It gets the job done and does a decent attempt at making a compelling story to follow. But I often found myself more interested in the lore of the world rather than the overall objective that the game is based around. Voice acting is pretty good as well, ranging from typical gravelly-voiced main protagonist and a great-sounding AI companion, to more human characters, each feeling like real characters within a real world.

Whilst I did find myself really enjoying Ghostrunner, I did have a few issues with it. Namely, I had lots of trouble with missed clicks from my mouse. Thinking this was just my own mouse acting up I switched to a different one, only for the problem to persist. Switching to other games and back to my previous mouse also saw no issues with missed/false clicks, so this must be a bug and will hopefully get fixed at launch. It's not a huge issue, but when I’m on a roll and a simple missed click means I don’t complete a level, it can take away from that immense satisfaction you may feel when normally completing an encounter.

Additionally, when the controls work, the mouse and keyboard is the perfect way to go so you can have that oh-so-tight precision in these fast-paced moments. But Ghostrunner is also designed for consoles too, and I had a go at playing with a gamepad but found that some encounters beame brutally difficult with a gamepad controller, and I cannot even imagine what some late-game encounters would be like when using a controller. It's not a big deal, but if you’re thinking of playing with a gamepad, it’s probably best to stick with your trusty KB&M. 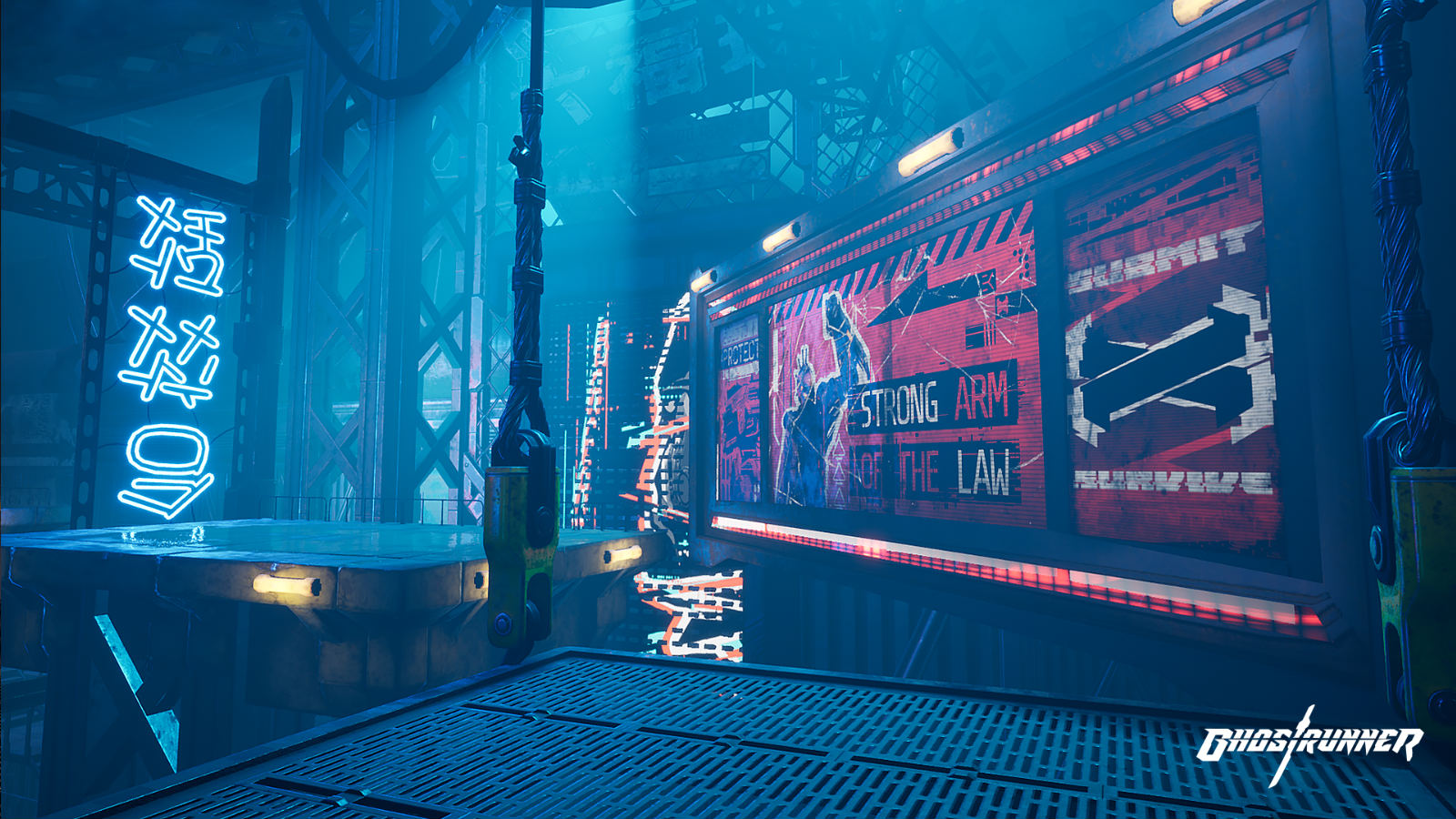 I’d also like to see more speedrunning-friendly features added as well despite Ghostrunner feeling like a game that begs to be sped through. Things as simple as a ‘restart level’ button when you die; because right now if you want to speedrun an entire level without any deaths you’ll want to restart the level instead of restarting at the latest checkpoint. Currently, you have to go into the game’s menu, which isn’t a big deal, but it goes to show how Ghostrunner has yet to adopt more speedrunning features that it probably needs.

Leading on from that, the one major gripe I have with Ghostrunner is the lack of replayability after beating the main game. Sure, there are collectibles like items that give out more lore of the world, audiologs, and of course, Katana skins, but considering the game is mostly about speed and accuracy, there’s a surprising lack of time trials and individual challenges to complete after finishing the campaign to keep you playing long after the credits roll. Something as simple as a time trial mode would add so much replayability beyond the main campaign.

All in all, Ghostrunner mixes all the best parkour elements from Mirror’s Edge and introduces it to the chaotically symphonic combat of orchestral violence that is Hotline Miami. Run, die, run, and die again; it’s brutal in all the best ways and will have you aching for a perfect run. Whilst it does have some issues and can feel a little short, your time in Ghostrunner will be wholly enjoyable, and filled with so many ecstatic moments of blissful victory.

it gives me a feel of Shadow Warrior 2