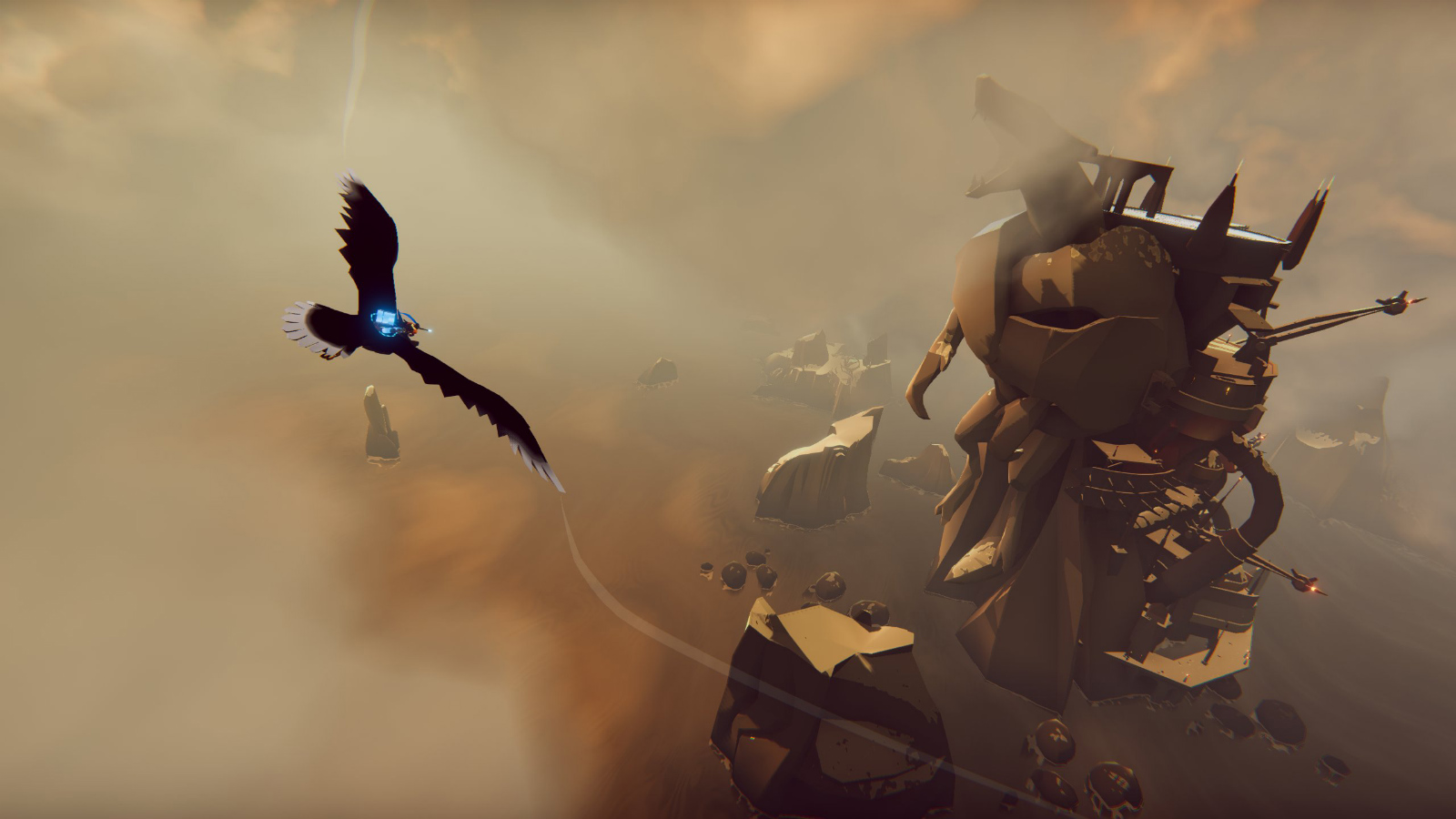 The Falconeer review - The Falcon and the Eagle Soldier

Written by Stuart Thomas on Fri, Nov 6, 2020 3:15 PM
The Falconeer
Where does The Falconeer rank in the list of the most demanding games?
100+
Rate this game User Rating
What's your user review score for The Falconeer?
7.36
Ok Not Ok Optimisation
How well optimised is The Falconeer for PC? 2.5
2.5

Every so often a refreshingly beautiful game lands into our virtual intray. In a few days we will see the release of an indie title put together by the modder come indie developer, Tomas Sala. If you recognize his name it was probably associated with his popular Skyrim Mod, Moonpath to Elsweyr. But since then we find him tucked into the development studio, Little Chicken Game Company. For the past couple of years he has been working solo on his latest title, The Falconeer.

Sitting on the back of a giant falcon you control the majestic bird as you glide it through the skies and clouds, dropping to just above the rolling seas and past boats, onwards, until where finally you may settle on a designated perch, that some house dotted island has set aside for you.

The flight mechanics are satisfying and intuitive to pick up - more about that shortly - but the thing you notice first about The Falconeer is the art style. If you pop over to Little Chicken Game Company’s website you will see a few other, possibly slightly lower production games, with a similar art style. There is also a paper airplane game, with what must have been one of Tomas’ first professional forays into developing solid flight mechanics that we now see in The Falconeer.

But while it’s interesting to look back at where The Falconeer has come from and how much it has evolved, the exciting prospect of this game’s future is what captures me the most. A game I recall getting that feeling with last was the very first Assassin’s Creed. Why are we suggesting similarities between a Ubisoft mega budget title about parkour assassins and an indie solo dev project about Falcon riding flight sim? I will come back shortly to explain this as well.

Designed for arcade style gameplay using a gamepad, The Falconeer begins with a tutorial that introduces you to a handful of moves and controls. You can push your Falcon to speed up at the cost of your bird endurance, which is tracked via a little bar. The bar naturally regenerates back up, at varying rates, as you glide the air currents more or less effectively. This additional speed boost seems pretty subtle at first but can help to get you to your location a little faster or outrun an enemy.

Oh yes, there are also enemies. Pressing the shoulder buttons you can roll your bird to turn faster or put on a cheeky airbrake maneuver to let the enemy bird riders zip past. At which point the giant lance style cannon all the bird riders have, pointing front and center from your bird, can be unleashed.

And so the aerial dog fights between birds and airships and ships sailing the seas and other things, all layer in to add some purpose to the game beyond swooshing through the beautiful clouds and scenery, which is of course lovely. 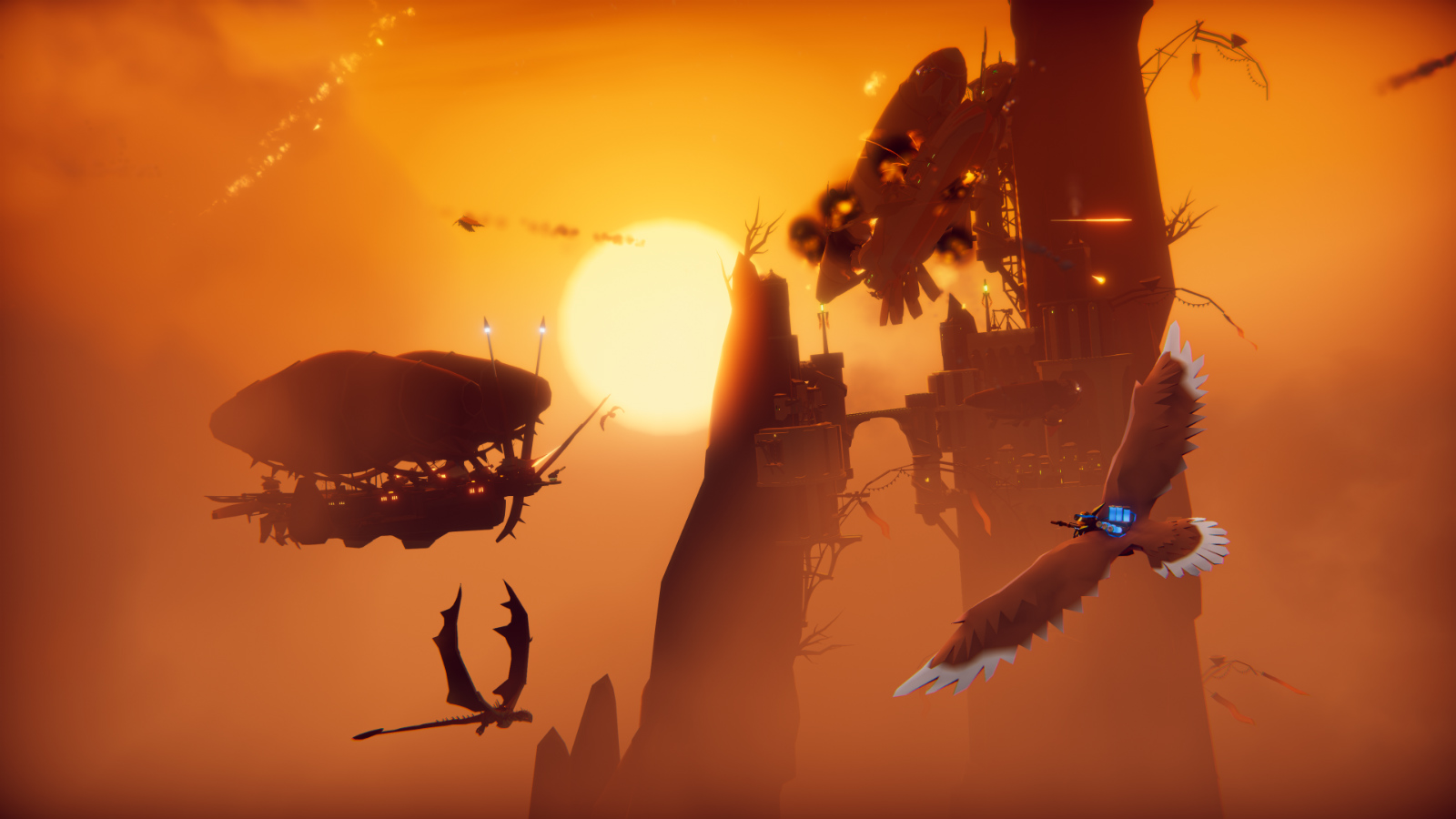 You jump from island to island, leveling your bird up, buying better guns, charging your ammo stacks (that are dangerously housed on the back of your bird with you, the rider) by flying through lightning storms, taking on local missions - which are a little same-y at the moment - building something of a relationship with each of the island towns you discover. Or perhaps pursuing the linear story missions which again don't quite add as much depth to the game as we might be hoping for, but certainly come together to help the player have more purpose.

But currently, The Falconeer this seems like the beginning of something greater. Something much greater perhaps, likely dependent on how well Tomas does, I guess, with the release of this beautiful and original flight sim.

And this is where my earlier Assassin’s Creed reference comes in. To keep this clear, The Falconeer is obviously nothing like AC to play, but I wanted to state that to avoid any possible confusion.

When I first played Assassin's Creed, all those years ago, I experienced a game with a great mechanic and the foundations of a world builder that, once story and depth of purpose had been realized, would make an incredible game. Upon first release, AC was not what it could have been and this is the same with the Falconeer. And probably due to similar reasons as Ubi and Assassins Creed 1, at some point in a dev project you have to wrap the boundless possibility up and say, I have built something fun and unique, that could be so much more, but let’s get it out there and see if everyone agrees with me. Ubi of course had a crap tonne of marketing capital, but hopefully Tomas can dig deep with his release. 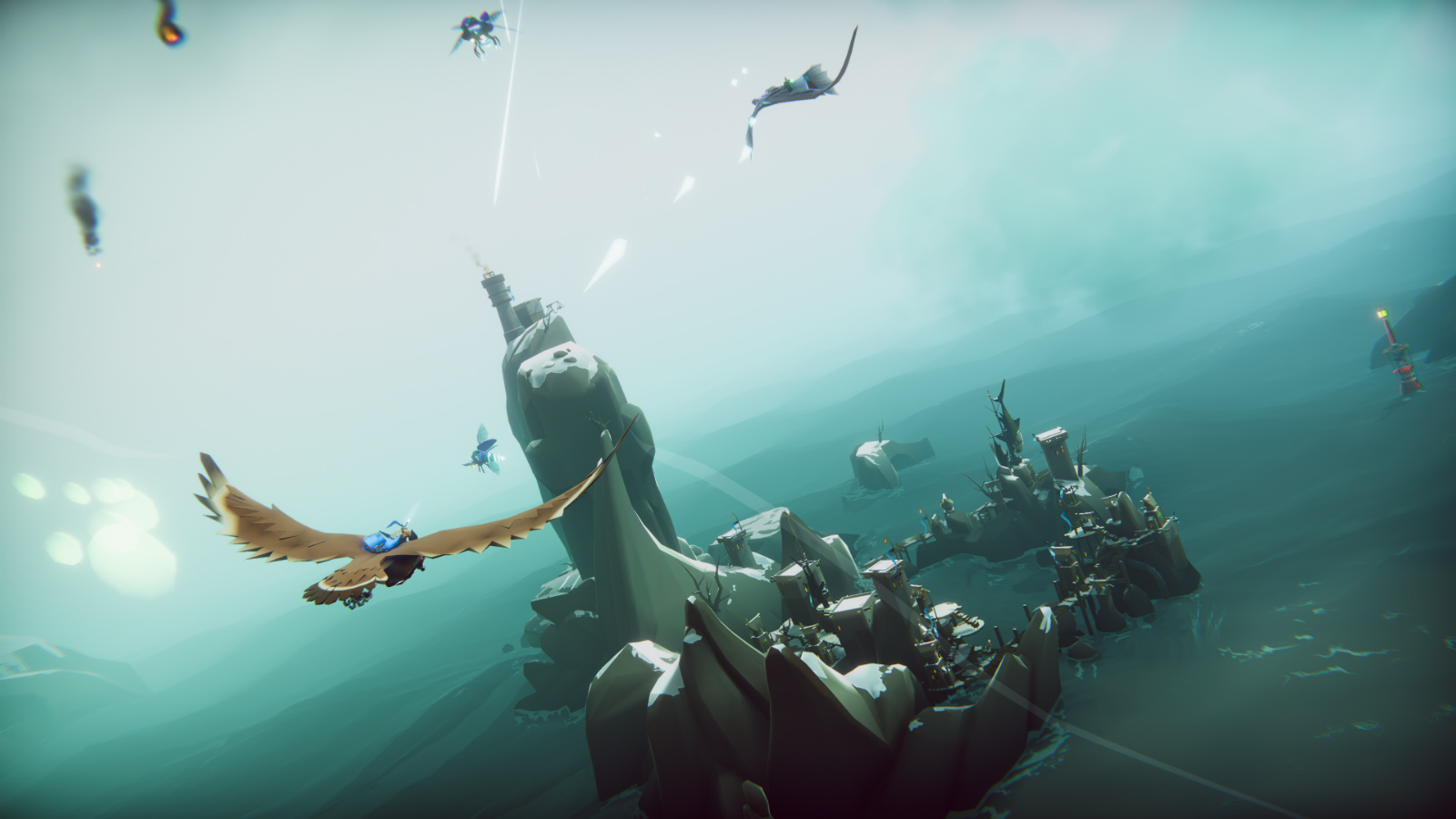 I spoke to one of our reviewers who also played The Falconeer and they said they had a great time with it for similar reasons to me, but for example were disappointed when they spent a while trying to figure out how to land their bird at a settlement, only to find you have to go into the right area and then press A, which would do it automatically for you. He was hoping to have to glide in at the right speed, lift the bird up during the final part of the approach to airbrake and then engage its talons to grip at the last moment.

Or perhaps during a dogfight the player could have more subtle control over the wings, the beak, the talons, the rider; combining subtle twists to help dodge or deliver imaginative counter attacks. Maybe the player could land anywhere, wait, survey the horizon and hunt, instead of being confined to a predesignated perch in a few predefined locations. Or perhaps construct/choose your own base location to expand, maybe interact with land based creatures in a variety of ways that would lead to you stalking and watching from a high up perch, enjoying your sense of aerial power.  Maybe improve visibility available to you through the bird's vision, or plop a trading system together between the islands and of course the ideas can go on forever.

But that’s the sort of scope the game’s future holds. It’s boundless and fun to think about. Just like I did after the original Assassin's Creed launch. And no doubt Tomas has already planned those sorts of possibilities, discarded stuff that wouldn’t work and thought of far more interesting things, all assuming the success of The Falconeer’s release in a few days. 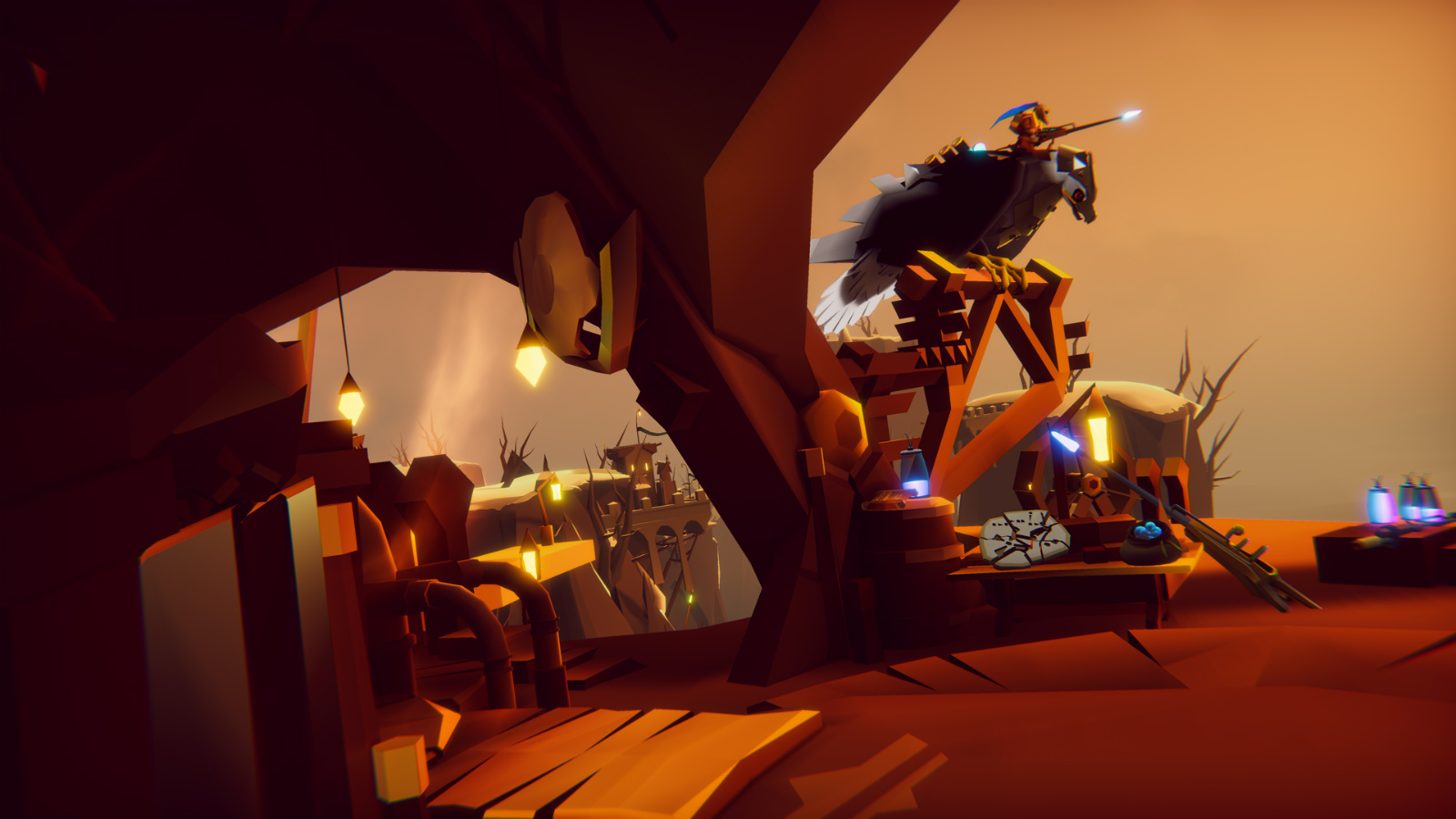 But make no mistake, today’s game of The Falconeer is accomplished and beautiful and accessible, making it super easy to pick up and play. It’s nicely paced, so you don’t feel rushed and can enjoy the incredible visuals, but it delivers the high octane aerial and sea battles, where you can feel like you are perfecting flight skills but don’t get too overwhelmed. The battle difficulty increases as you push through the story. The equipment and levelling help keep the player engaged with achievable progression.

There is a lot to enjoy in The Falconeer, a lot to keep you picking up a controller and having another flight. It’s also warmly satisfying knowing this well put together game is a project of passion and it feels like it has the backing of some solid developers and publishers. It was completely bug free during my time in the saddle and that can’t be said for most triple A titles nowadays.

And while it’s easy to recommend you pick up and enjoy The Falconeer, its real magic lies in waiting. As hopefully it's the start of a new series, where we eventually see The Falconeer Black Flag, or whatever Tomas decides to call it. And that is really where it starts to fill my flight chaps with excitement juice.

Enjoyed reading it.
Thank you for a wonderful review.