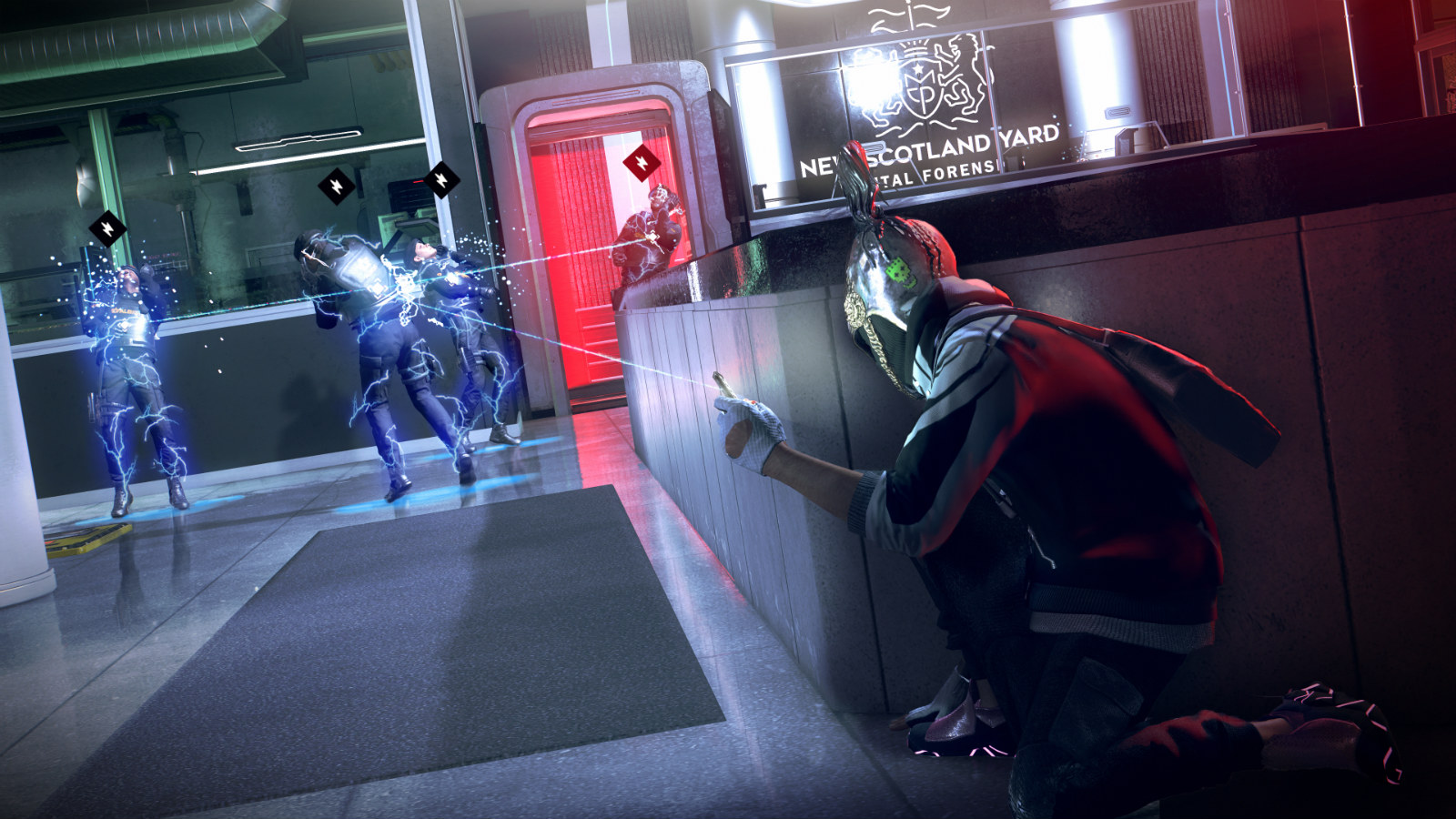 Watch Dogs Legion is the third entry in the Watch Dogs franchise. Set in a dystopian post-brexit London, a hacker group known as DedSec are fighting back against the conspicuous Albion, who have seized control over the city in a bid to ‘save’ the people of London. But, like any cliche villain, their true intentions lie behind the curtains.

And like the true hacker voyeur you are, lifting those curtains is your main objective, and will take you on a journey of conspiracy theories and political plots all designed to indoctrinate the population with dystopian ideologies.

The gimmick here is that you can recruit anyone you find or meet in London to be part of your resistance. Literally anyone you meet on the street, or interact with in some way, can be recruited to join your team. Need a construction worker to easily call in a cargo drone? Find a construction site. Even characters like Albion employees, who are enemies, can be recruited and allow you unrestricted access to Albion locations.

It’s heavily detailed in that regard, but considering that’s the whole gimmick with Watch Dogs Legion, that’s not exactly surprising. But it is pretty incredible to see in action nevertheless, as every character has their own schedule. It feels like these are real people with real lives. One time I tried to recruit an Albion guard and found that, after a long shift guarding a warehouse, they play football for an hour with a friend in a nearby park.

It’s moments like this which give WD Legion a lot of life, and subsequently a lot of intrinsic gameplay; there’s a lot of fun to be had here, but you make that fun yourself a lot of the time. Whether that’s a good thing or a bad thing is up to you.

The story isn’t much to write home about, but it’s certainly interesting enough to keep you going. It definitely picks up later down the line, but I found the first few hours to be quite a slog. It also tackles some pretty interesting subjects and sci-fi tropes, but rarely ever gives you enough to really think about. Generally, it presents an interesting idea in a very unsubtle way, and then just leaves it when you’re most interested.

Unfortunately this is where the ‘recruit anyone’ gimmick starts to struggle. The system works, surprisingly well actually, but it’s hard to get really invested in any single character since their personalities have to be so paper thin as to be easily replaceable by thousands of other characters and voice actors. It really does suffer as a linear story in that way.

As for the location? This is London of course, one of the biggest cities in the world, and I’ve always wondered why it was rarely ever used in other open world games. Now the reason is clear: London is boring. It’s grey, drab, and full of concrete, and it rains a lot. I have to say that whilst it is a pretty incredible recreation (albeit, in a more futuristic setting), I was often longing for something… different. 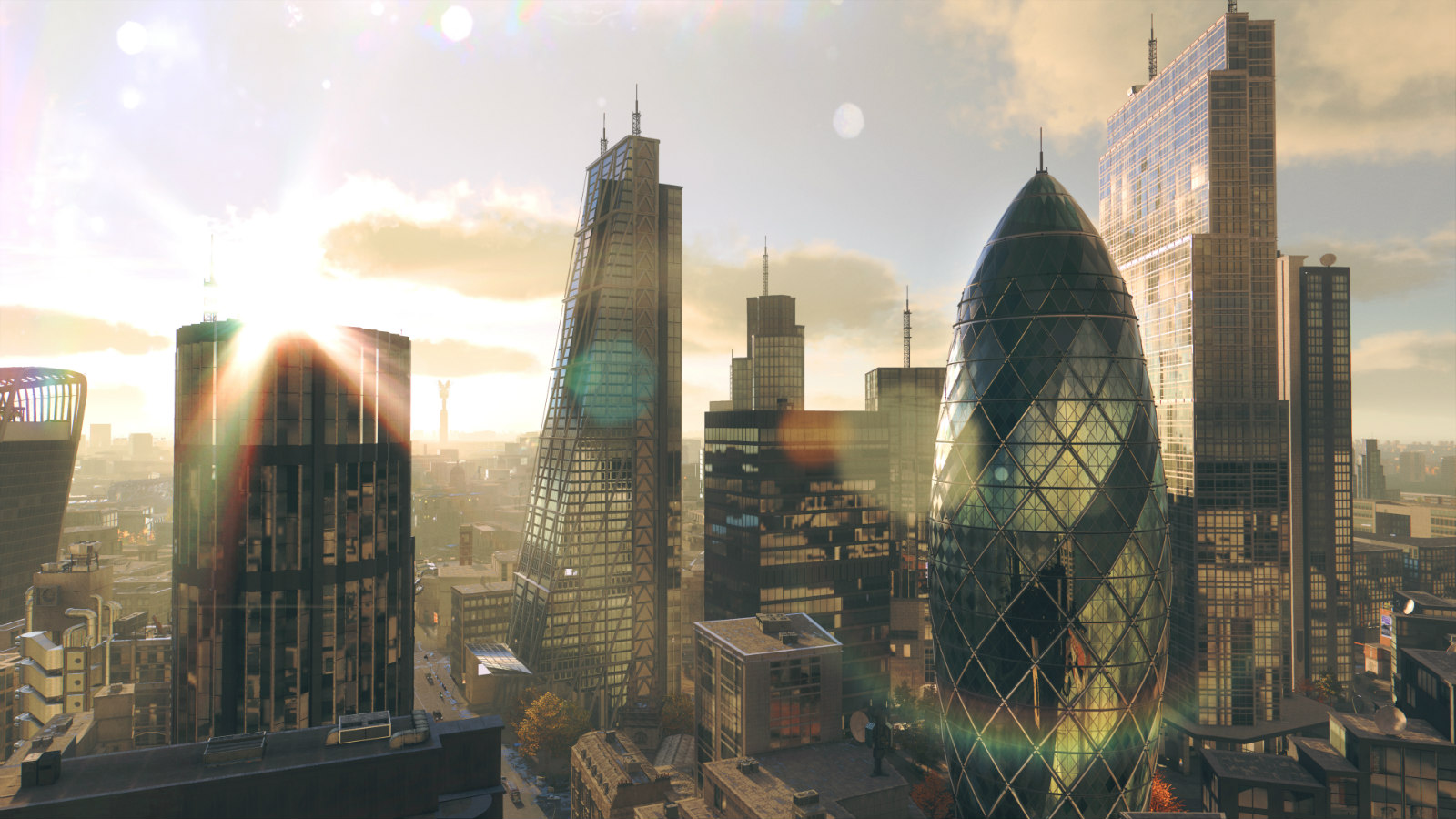 Where Chicago from the original Watch Dogs had rural outskirts, London has grey apartment buildings. Where San Francisco had lush rolling hills, London is a flat and unappealing landscape. There’s nothing to set one area apart from the other than with a slightly different shaped building. Walking around one area hardly ever looks apart from any other area in the city. It’s a shame that with a more futuristic setting, the only difference for London apparently is that it has a lot more neon lights, but that does hardly anything to cover up the grey walls and sides of buildings.

Thankfully, it’s the interiors of most of these buildings that really shine here. Whilst some places can almost look like a carbon copy of some other place - with a slight adjustment on some key aspects - in general, the variety on offer is much more appreciated. If you dig really deep into it you could probably argue that this is some sort of allegory for the human mind: it’s what’s on the inside that counts. But I think that would be treading too deep into something that largely remains very shallow.

These interior locations/restricted areas are almost always guarded and require you to break in and do something (you know, typical video game “go here, do thing” objective). Almost all of them will be related to a quest in some way, but will always have certain items of value to obtain. Whether that be tech points for upgrading and purchasing new skills, or new cosmetic mask items, or text documents and audio files to expand the lore.

Getting into these restricted areas is where the variety comes in, as there are any number of ways in which to infiltrate. Whether that’s with a cargo drone, a spiderbot, yourself or anything else, there’s an insurmountable number of ways that you can tackle an objective. It ends up almost feeling like an immersive sim at this point, with multiple different obstacles that can be solved in multiple different ways. 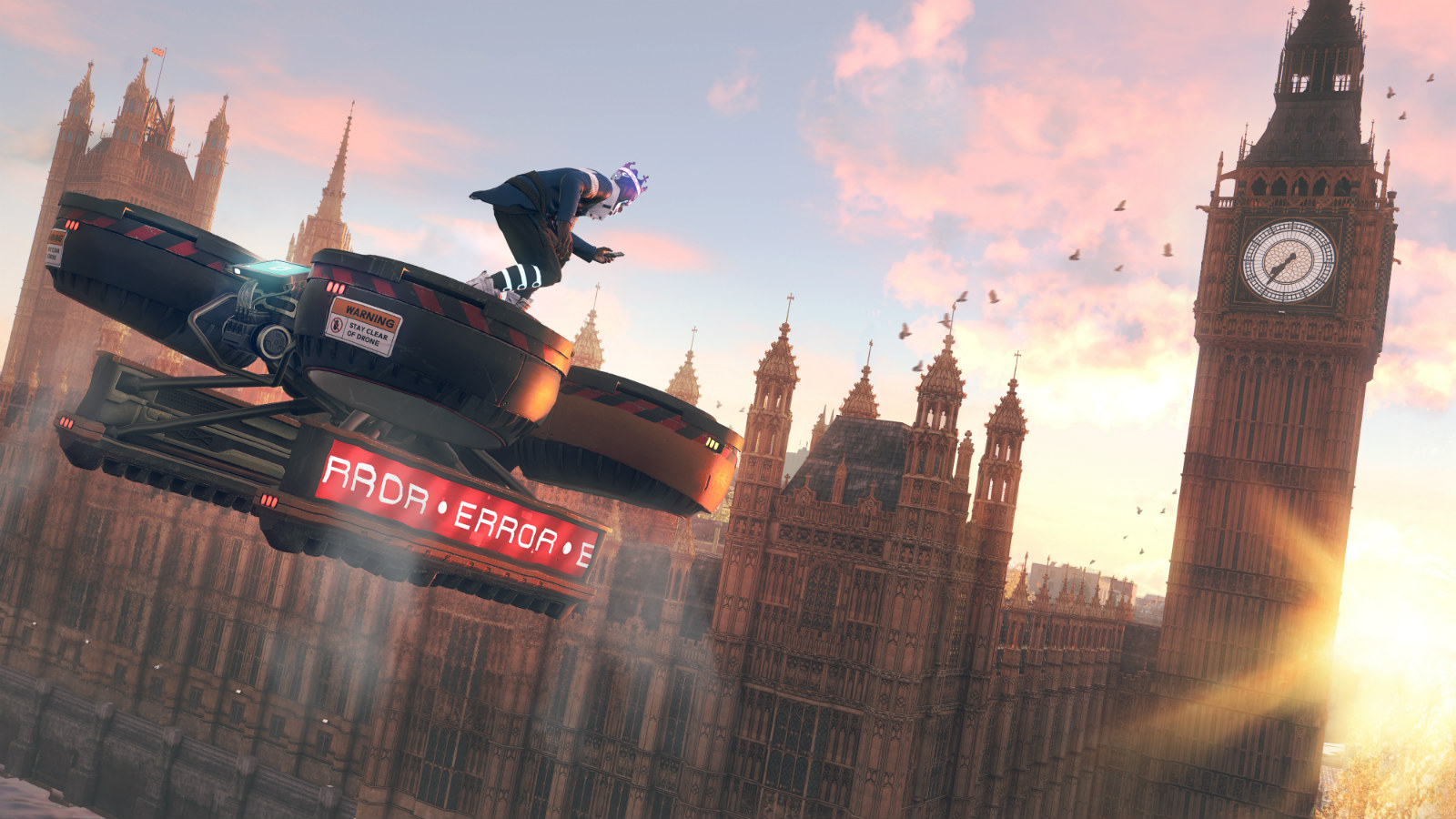 There are some puzzles to solve in the world as well, and once again this is where Watch Dogs Legion really gets to shine. Many restricted areas or levels will incorporate some sort of extra hidden area that you need to access for a certain mission. Sometimes this can be just another huge complex filled with bad guys to neutralize, sometimes they can be areas where you’ll need to guide a drone through a series of mazes and tunnels, or even use your spiderbot gadget to navigate your way through a series of tricky puzzles and deadly traps.

There are really two highlights that I’d like to discuss here: the first being a parkour-style climb up the Big Ben clock tower with your spiderbot. Walking across thin beams of wood where a single misstep will be the end of your beloved robot companion, and dodging giant moving cogs with precariously placed openings. It was all quite fun.

Another moment that I really enjoyed was an area where it was completely dark. Since it was pitch black I couldn’t see anything around me. Instead, I had to use a small drone around the corner and it’s flashlight in order to light up specific parts of the room so I could navigate my way around. It was a lot of fun, and not the kind of puzzle I expected to be solving in such a game.

There’s also a fun little minigame where you have to divert power across these gridlines located in the area. Again, trying to solve these puzzles was a lot of fun as well, even if they weren’t terrifically difficult, but they’re fun nonetheless.

And I think that’s where the strengths in Watch Dogs Legion lie: in the sheer variety of tasks and strategies at any given moment. Changing to a new operative will open up many more different routes than you would normally take. And each puzzle encountered can be another variation on another puzzle, but still interesting enough that they keep you engaged. 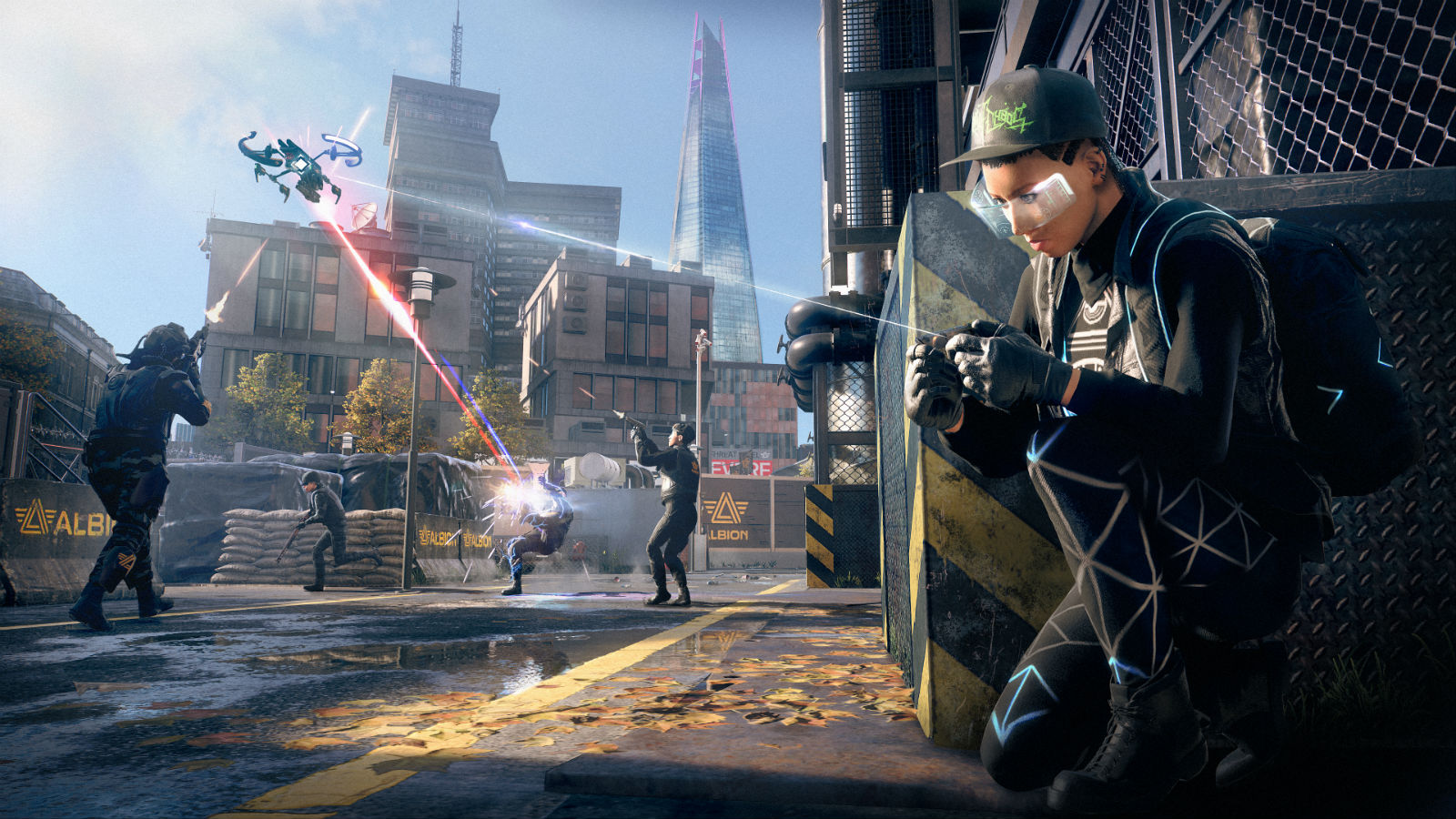 Unfortunately, with the sheer variety available at any given moment, WD Legion fails to really master any individual one of them. Whilst it’s fun to be stealthy, it gets boring after a while. While it’s fun to use a spiderbot for scouting and neautralizing enemies, I start to crave the action of combat again.

A jack of all trades is a master of none as they say.

Then again this does play into the strengths of constantly switching up your playstyle, as when one gets boring you can quickly switch to another operator and hey presto! Now you’ve got an entirely new way of dealing with the same objective ahead of you. I found Watch Dogs 3 to be much more fun when I was doing this regularly.

Unfortunately, it all feels like a kind of Beta test. Sure, the gimmick of recruiting literally anyone is cool and fun for a while, but it rarely goes anything beyond that. And the world design is uninspired, but the challenges found within locations are really great and genuinely engaging.

I enjoyed my time in Watch Dogs Legion, more than I thought I would, but for every moment I enjoyed, I equally just wanted to go back and play Watch Dogs 2. Sure, there’s a lot more here that’s an improvement over the last, but in the end WD Legion fails to find its footing in any singular mechanic. There’s a lot on offer at any time, but there’s not a lot to really rave about.

Watch Dogs Legion is a fun and satisfying open world sandbox, with lots of tools for destruction and various strategies to go about completing your objective. It’s great in short bursts, but rarely has you hooked on any one thing to keep you coming back.

I will totally buy it, at Black Friday. Very good game, also i am in love with the graphics and the ray-tracing.

I'd like to try it out too, but after it's been patched out (games at launch are a joke these days).
Also when I grab a 3090 - kinda no point trying to run it now on a 2080Ti when the raytracing is really nice in this game.

I know, saw the rumors. We'll see. The prices I saw were not 900 and let's not forget that the "MSRP" is also fake, so tack on another 300-400 and it's pretty much a 3090 price range, just without the extra memory badwidth and 4GB less memory itself. As I am really digging the stupid high resolutions - I'd like to stick to a 3090.

I know that watching YT videos is technically not the same as playing the game itself (don't have hardware powerful enough for the game and time is a factor) but even so, the videos pretty much echoed your review like 1:1.
P.S.
Thank you for an excellent review.