Far Cry 6 Review - The best version of the same thing

It’s fair to say that Ubisoft has found a formula and stuck with it, and not just in terms of one game series, but across multiple franchises too. It’s obvious that Ubisoft has hit a bit of a brick wall when it comes to innovating on the same formula again and again, and perhaps Far Cry 6 embodies this in the best and worst way possible.

Far Cry 6 takes place on the island of Yara, run by the tyrannical dictator of one Anton Castillo. The player, Dani Rojas, is quickly swept into the world of the Guerrillas, fighting for a better tomorrow. But in order to liberate the entire island of Yara and its people, you will need to take out Castillo’s most important allies, make some allies of your own, and finally take Castillo out once and for all.

Right off the bat, Far Cry 6 is at its most Far Cry. Yara is a massive playground and littered with opportunities for action, exploration, and story development. After a brief prologue on a small island off the coast of Yara, you are then thrown into the open world and tasked with making allies across the 3 distinct regions of Yara. To do that, you will need to help the Guerillas fight back against the top dogs of Castillo’s elite. 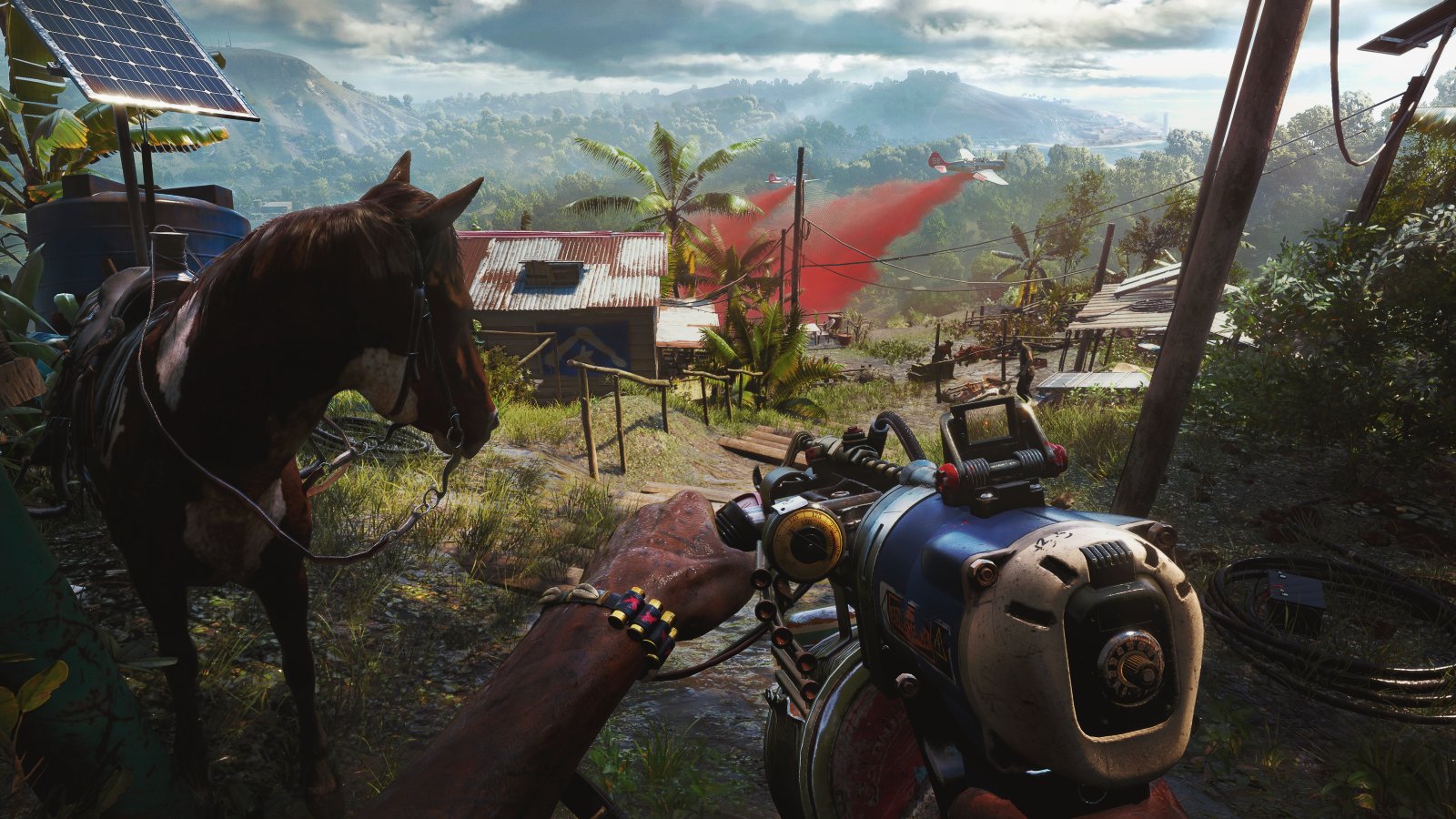 There is some fun to be had in Far Cry 6 though, don’t get me wrong. On its own, Far Cry 6 is the best version of a game you've already played 3 times already. To some that might be a great thing, and to others that might be a rip off.

However you feel about it, this is peak Far Cry at its most Far Cry: a sprawling, lush landscape filled with opportunities of destruction and moments of chaos, all tied together in a melodramatic story with a larger than life villain. You've already played it 3 times already, but this is arguably the best version out of any of them.

If you skipped any of the recent titles - especially Far Cry 5 and New Dawn - then you'll likely find enough enjoyment out of it. But if you've played all of them religiously, and especially found yourself getting tired of the same tried and tested formula, then there's very little here that will likely draw you back in. There's a few new features different from previous titles, but just because you slap a new spoiler on an old and dying car doesn't make it any less in need of replacement. 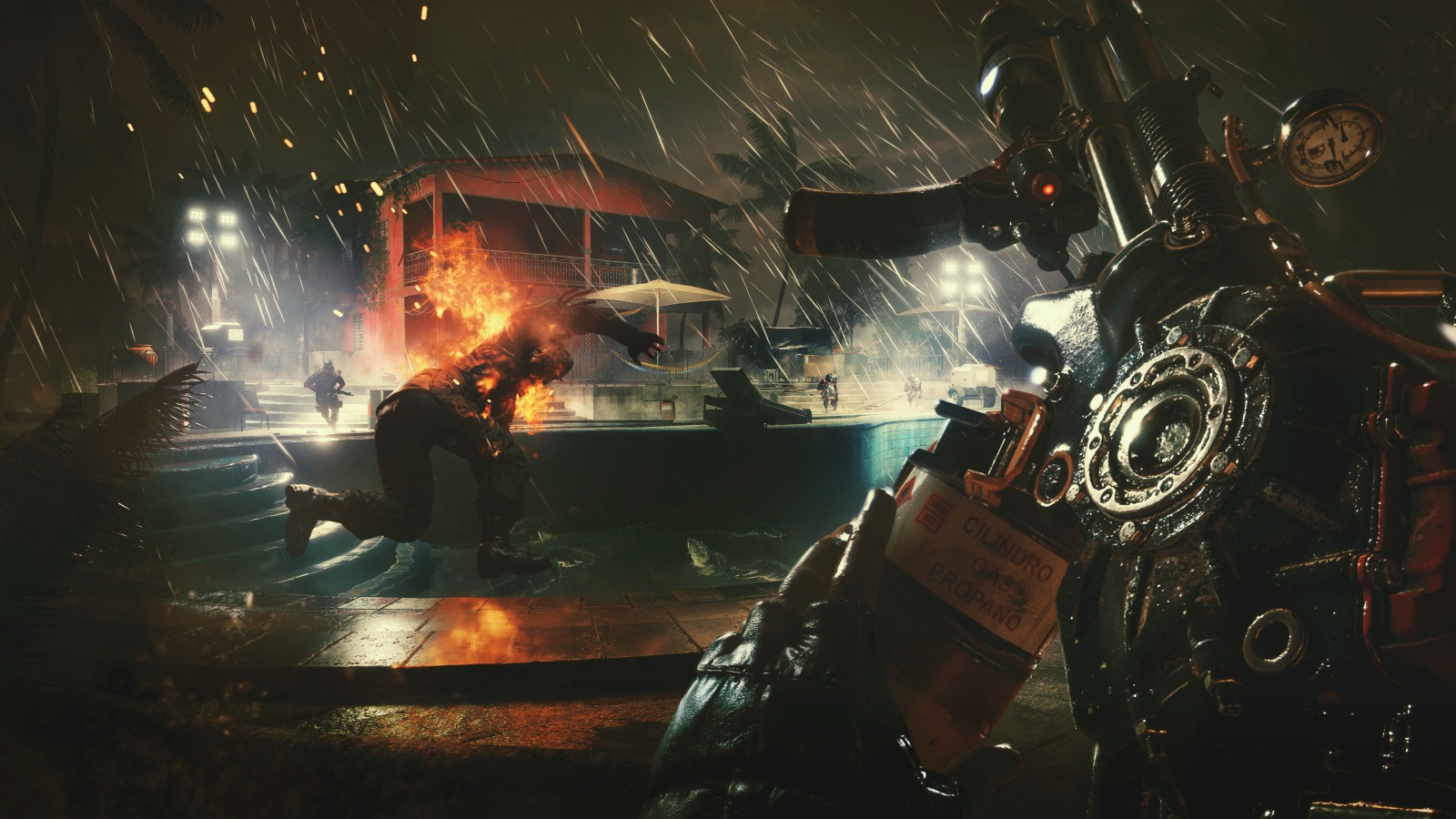 It's ironic then that a game about revolution is far from the revolutionary change the Far Cry formula so desperately needs. Flaws and all this is a great game by its own right, but standing in the shadow of the past 3 games dilutes the experience to the point where even diehard fans might feel a little underwhelmed.

There's a lot of callbacks to Far Cry 3 here, and it's obvious Ubisoft was trying to make a comment on what many consider the best game in the series even all these years later. That game felt fresh and unique, with a villain that truly scared you and wasn;t afraid of asking some tough questions.

But for all its flaws, Far Cry 6 feels like the true sequel to Far Cry 3, like all those other entries in between were just more spinoffs. That’s why this feels like the best version of Far Cry so far, but unfortunately it’s taken several minute incrementations of the formula to get there, so it comes off feeling a little less fresh than we’d like.

It also wants to ask the hard questions, but quickly brushes them off in favor of the next shiny thing, the next story beat. I feel like Far Cry 6 wants to tell me something, but it’s hidden behind a wall of noise filled with explosions, fire, and superfluous mechanics. 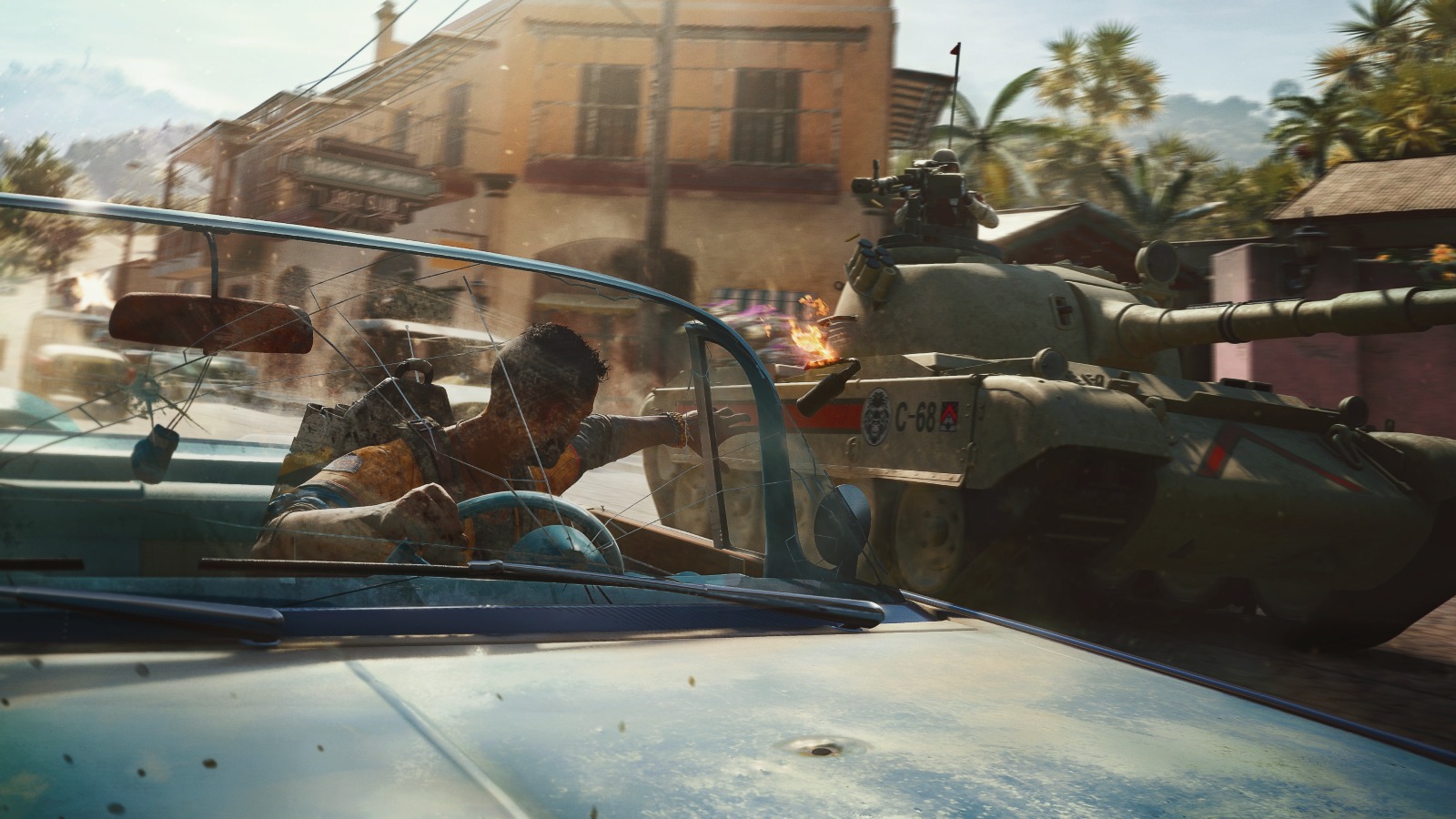 As if anyone is surprised though, Giancarlo Esposito absolutely chews up whatever scene he's in. It's a shame then that he doesn't have more to work with. His presence is menacing, with his voice booming across the island wherever you go. It feels like he’s always there, ever present, always watching…

Unfortunately, the scenes in which you do get to see more of him are few and far between. Castillo might not be the best villain Far Cry has ever had, but so far the series has nailed pretty much every villain they have created that it’s already a high bar to exceed. Again, Esposito’s performance is phenomenal, but I just wish the story gave him more of a spotlight to be even more menacing.

I do also love the new third-person cutscenes, especially now that we get to see some scenes away from our main characters. Cutting to Castillo when he’s trying to teach his son an important lesson, that almost always ends up with some twisted logic designed to manipulate and control, is really great and doesn’t force the story into a corner where only your character can see what’s going on.

But now that the camera can move in and out of scenes with an omnipotent perspective I can't help but feel that something is lost when you're not staring directly into the eyes of the villain through your character's own eyes. When Vaas looks at you and asks what is the definition of insanity, you feel terrified, like he’s looking deep into your soul, and exposes the truth that even you have a darkness somewhere inside too. It’s not a big deal to say the least, but a blend of the two styles would have really elevated the experience. 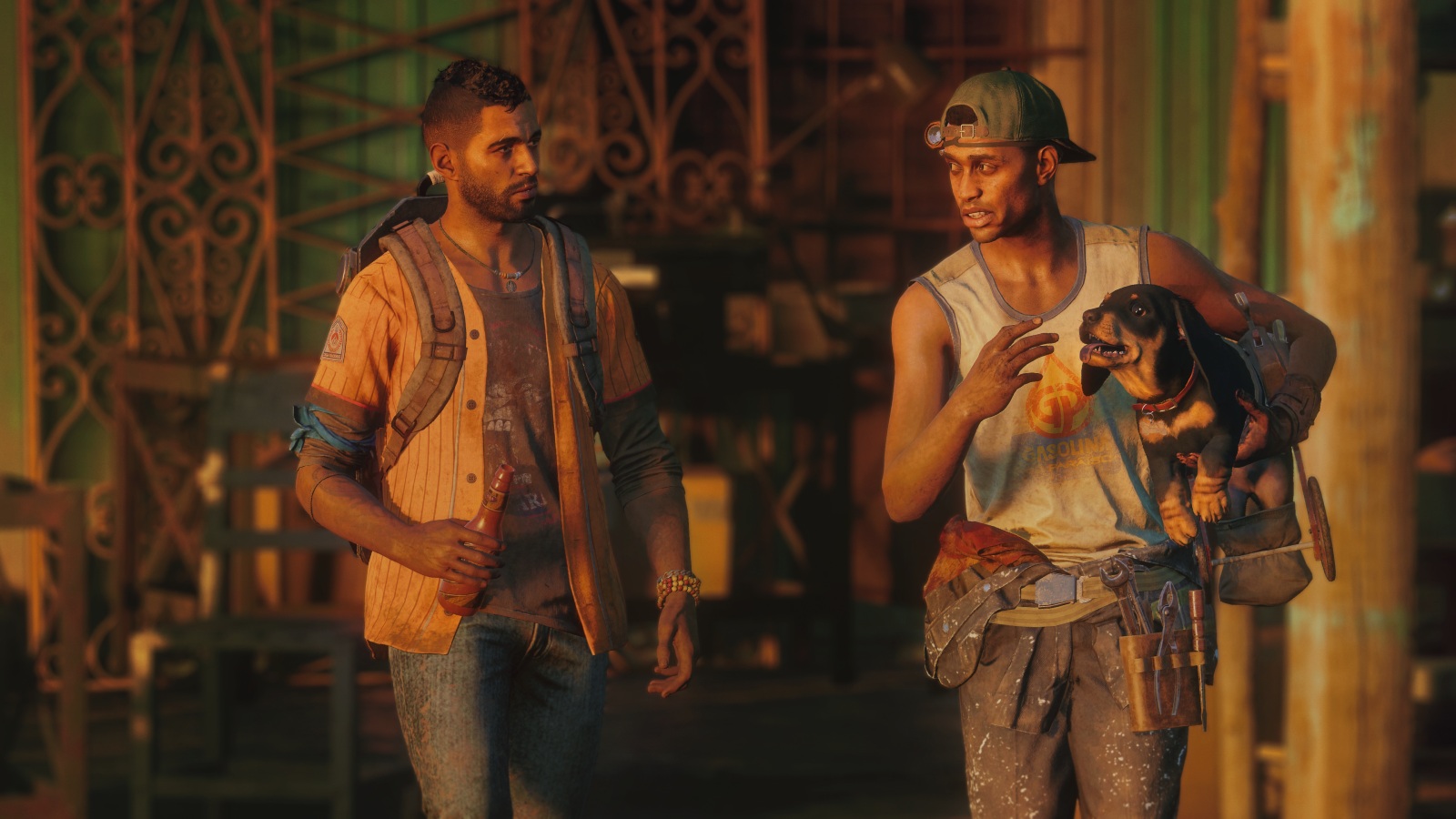 But again, those moments with Anton and his son are always great to watch. Castillo knows his days are numbered, and his son Diego is the only one who can save his legacy. At times this can be pretty powerful, and even downright sad to watch a child lose their innocence to a corrupt father.

If there’s one thing that Far Cry 6 absolutely nails though, it’s the world design. This is by far the most beautiful Far Cry game to date. The lush island of Yara is a stunning place to explore, and often has moments where you might be struck with sheer awe over the beauty of the landscape. Despite fast travel being present in the game, I often found myself travelling to destinations on foot or by horse just to take in the scenery. And when I’d find a small alcove with some new gear that wasn't marked on the map, it all became worth it.

It’s another shame then that the gear system itself feels a little half-baked. There aren’t any duplicates, so you’ll have to find all your weapons and gear by exploring the island and discovering secrets. That can be fun for the first 10 hours, but after that it just becomes a slog. The Resolver system certainly helps though, allowing you to customize your weapons with new attachments. But the pacing of it all just feels a little off. You can at least buy some guns and gear to bypass some of that grind though.

Luckily, there is still a decent variety of content to keep you engaged without feeling like your brain is slowly dying. Sure, liberating outposts is the main focus of gameplay, but there’s also street races and treasure hunts to spice things up a little. The latter in particular makes fantastic use out of the new landscape. From exploring deep underground caves, to scaling sheer mountain cliffs, the treasure hunts can be really fun at times, often turning into unique puzzles that set each of them apart. 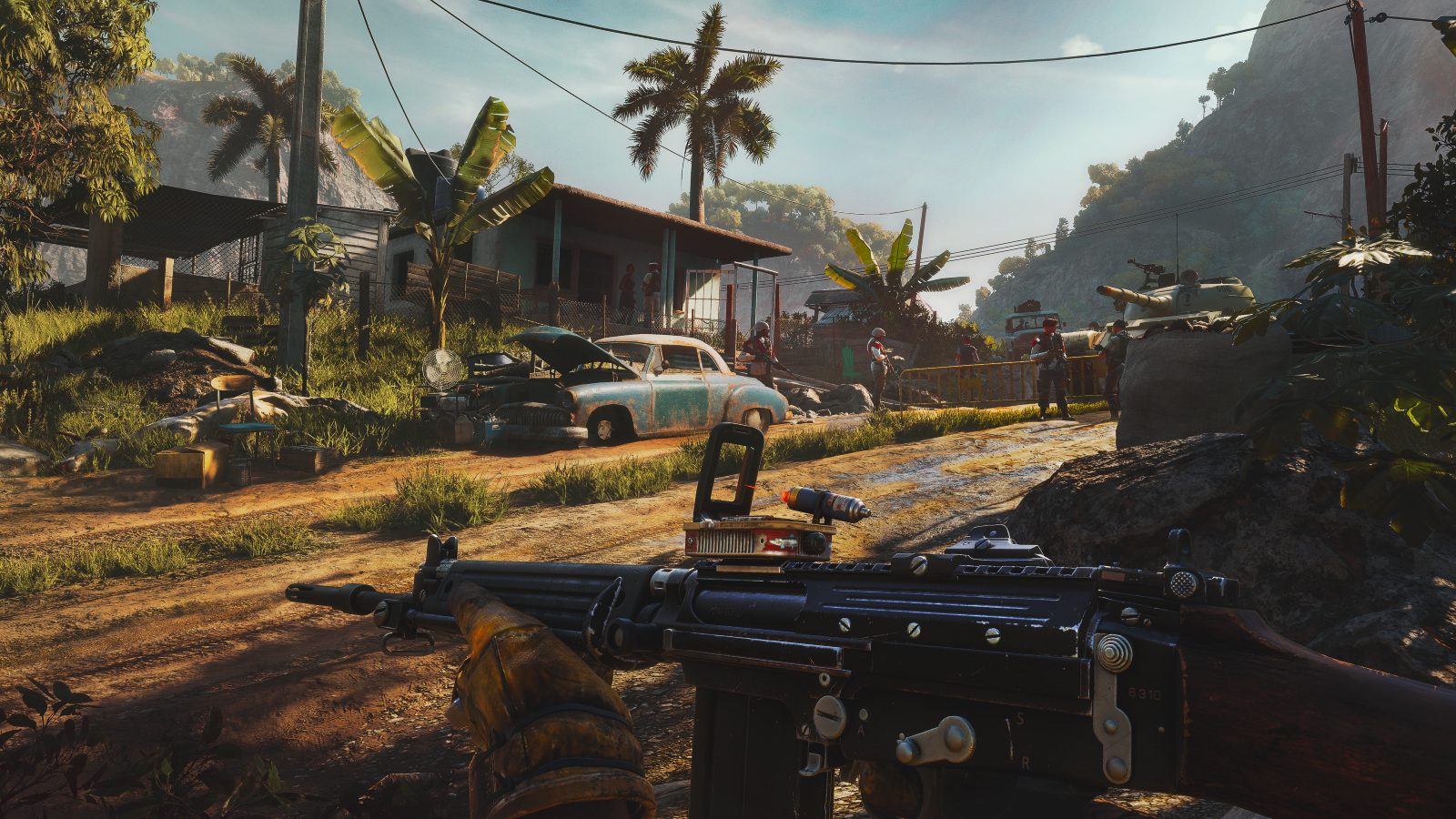 However, that facade slowly fades when you realise there’s not much else to do, and at the point you feel like maybe you got your fill already, you realise you’re not even a third of the way through the entire island. This wouldn’t be as much of an issue if there was more variety, but as it stands there is just enough to keep you going.

Again, Far Cry 6 isn’t a bad game by any means. But for all the great things it does, they are overshadowed by 3 games that have done it before, and if you’ve already played them the overall experience can feel pretty lackluster. Far Cry 4 is a better game than Far Cry 3 if you’ve never played the latter. And the same can be said about Far Cry 5 and Far Cry 4. And once again you can say the same thing here.

Like a friend of mine said to me: if Red Dead Redemption is a fine wine, then Far Cry is a hamburger. It may not be a masterpiece that wins all the awards, but every now and then I like to indulge in something a little more palatable. Far Cry is a playground after all, and begs you to just have fun with it.

It’s fun for what it is, but I wish new Far Cry games would build up on FC2 instead of 3.

Also, I cannot help but cringe the entire time when people speak “spanish” in the game.

I think the gameplay team is doing a good job of improving what they have, but all the other teams don't really care much and just make the same old stuff instead of improving. And by gameplay, i mean the mechanics, not the things you do.

Knew the score was bugged..GD please give me deathloop review plsss

Score is kind of silly. Unless your scale goes into the negative territory, zero should be reserved for the absolute worst game you ever played. Far Cry 6 is mildly entertaining if you never played a Far Cry before. It gets boring pretty quickly but there are a ton of other games I can think of that are far worse.

Ehh i think the score is bugged, but thx for this, now i might pick up this game in a year or so at 75% off

I have Ubisoft+ at £11.99 a month and got the Ultimate edition of there

Why am i not surprised? maybe the score 0 was in the air far before the game got released.....

Best version? I think not.

Greedy scummy Ubisoft added level scaling to the game to wipe out any relative power increase by levelling up so the main route to getting anything done is via resources to upgrade every bit of sh!t you have equipped so that Ubi can sell you fcking resources in a single player game.

For me a game deserves 0 only if it happened to kill my parents, abducted my dog and slept with my girlfriend. And maybe not even then.

I know it has flaws but damn...0? You're being kinda harsh with it.

The score is 0 lol