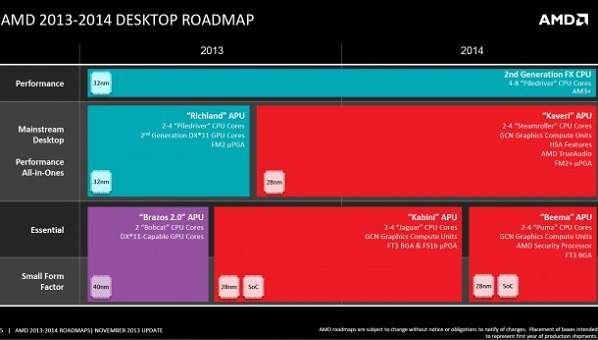 AMD has no plans in releasing Steamroller CPUs to replace FX Piledriver CPUs in 2014 which is quite a shame for such a company. Usually processor series gets replaced after every year. And since the Piledriver CPUs got released way back in October 2012, it was a must that Piledriver CPUs got replaced at least in 2014. But it seems like AMD has no interest in the desktop performance arena and might keep on releasing overclocked versions of Piledriver CPUs. The company has decided to focus more on APUs in 2014. A lot of AMD FX users, including me, were eagerly waiting for the release of Steamroller CPUs in the next year but it seems like AMD will keep on disappointing people which they have learnt on the day they released the Bulldozer CPUs.

Check this "http://phx.corporate-ir.net/External.File?item=UGFyZW50SUQ9MjAxMjA5fENoaWxkSUQ9LTF8VHlwZT0z&t=1" to see the original PDF file showing the entire roadmap of AMD CPUs. 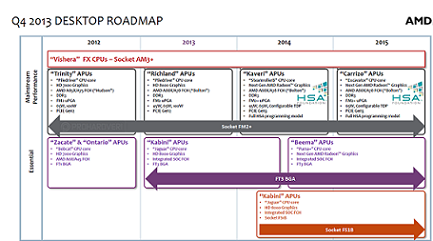 No AMD Steamroller till 2015(may be). The leaked AMD product roadmap suggests that AMD may be set to step out of the performance consumer CPU market to concentrate solely on APU production.

Check here "http://www.bit-tech.net/news/hardware/2013/12/04/amd-to-drop-fx-cpus-move-to-apus-suggests-l/1" to read more about the leaked image and roadmap.

Really people, the fact that the roadmap ends at 2015 doesn't mean new CPUs will come after that, it just means they can't or aren't willing to say anything sensible about that period of time. The fact that they stop now just means that they will stop permanently and only get back into the business when there's good money to be made again.

hmm well in a way its good news for me.. i probably wont upgrade till 2015. htough i was really looking forward for the new FX line up

there will be, believe me I'm 90% sure there will be, it was the same with piledriver, on the roadmap at the beginning there was only APUs then one month before the fx 8350(piledriver),etc cpus were released they showed them in the roadmap, but this time they may delay them to lat 2015

by that time they will move to a whole new arch, excavator probably.

I guess the AM3+ socket will meet it's end by that time.

well probably they might skip steamroller, but I don't care I want fx CPUs or equivalent, and yes the am3 alone is from 2007 and the am3+ is just am3 with one more pin, so I there is no doubt they could change the socket, but amd motherboards are cheap, so don't worry :)

Still bro, it was tough for me to obtain money for my MSI 990XA-GD55 motherboard. And I bought that with the intention of upgrading to some high-end AMD steamroller CPU in the future. But the future has got dark for me. No new CPUs for AM3+ socket. I am sad :(

Probably never. The roadmaps just don't go further, but it wouldn't make much sense to make a planned sudden re-entry. If they see there is enough money to be made in the sector again in 2015, they will get back into it, but with current estimates there isn't.

I've been saying this all over the web, but this totally makes sense. The CPU sector in AMD is continuously not making any profit, except for the APUs. It's too bad for the enthousiasts, but good for the company.

Lol.... Intel will come out with another socket type... So you get to upgrade your whole system again.
I love the fact that AMD has stuck to thier roots (for the most part)

Why do they do this? I'll tell you why; they don't need to replace the current generation and I'm glad about that... If I planned on upgrading my CPU, I'd have to purchase a new motherboard also which is not the case with AMD ;)

Actually it's better for guys with Vishera processors,their processors will last longer,more time till next upgrade :D
When i get some money i'm most likely going to buy a new mobo and FX 8350 :D

I really wanted to upgrade to Steamroller and was waiting for that but it seems like either I will sell my AMD processor and motherboard and go for Intel, or buy the FX-8320.

You got me wrong,there's some bottleneck in my system and also sometimes i have slowdowns when doing some things,planned to upgrade next year,not soon ;)

Yeah I didn't mean that in your case it would be a bad idea, but you said that people's vishera cpus will last longer and that's not the case. It will last just as long :)

Ah,ok then,i got you wrong

They will have the fx series even if they don't want them, because this way they are giving away their marketing to intel, they will make fx steamroller cpu, because it's fore their own good and they know it, if they don't then they are just stupid and are going to lose money...
Also there were

i rather doubt it, atleast for 2014.they said it themselves they are out of the highend business,its just APU's for them. they cant make chips to compete with highend intel i5's and i7's so they are discontinuing FX line to reduce operation costs i guess.

they made a bigger profit from their piledriver cpus than their apus and they throw them away, stipid...just stupid.Still I hope they get hit in the head by a stone and make fx steamroller cpus

i still dont think thats gonna happen, what they may probably do is release highend APU's with their iGPU's disabled and sell them as athlon's.

probably...
I prefer fx cpus over apus, apus are not good enough, well for games they are, but games are not all.....