since their release, Haswell series CPUs tend to be hotter/less efficient than their 22nm Ivy predecessors. The difference is quite significant - at stock voltage Ivy i7-3840QM on 3.0GHz draws 28.7W at full load while 4770K needs as much as 10W more to achieve same performance - 38.9W.

So what to do when our expensive CPU is already purchased?

Not to worry, here comes a feature long withheld from Intel customers - undervolting.

By adjusting clock and offset voltage, it's actually possible to bring that number to almost a half while preserving 3/4 of horsepower.

To get the best undervolting experience, I recommend downloading Throttlestop. Most BIOSes offer an option to adjust voltage, but I prefer software utility to find the right match. And once done, I'll enter it manually to BIOS OC section

When fully loaded on its stock settings, 4770K ramps the consumption to low 90's and fan starts spinning.

With fully loaded CPU and GPU, the consumption ramps up even more:

Although 125W isn't that much in terms of gaming rig, why not take it down when we can...

Upon downloading and unpacking Throttlestop 8.00 I started AIDA64 with System stability test and stressed only CPU+Cache 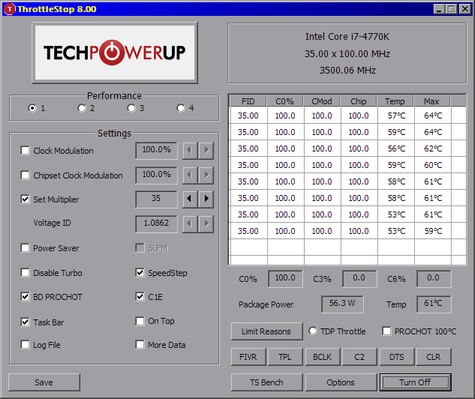 Package power went up to 58W and temperature to low 60's which translates into 92W from the grid.

10 Watts lower while keeping the same horse power as with stock multiplier. That's a lot. But I didn't stop there:

-130.5mV offset was the lowest voltage possible before the system became unstable. 13W down without sacrificing horse power.

To proceed further, we need to take down the clock as well. 3.0GHz provides enough performance and allows you to take the voltage down even further:

I thought, there's nothing to lose, so let's get crazy and start with -150mV offset. What a huge drop in consumption, another 12 watts!

This is stable configuration, and my preferred in fact. At 0.8645V the fan is inaudible and CPU package power measured 35W. So far there's 15% loss in horsepower but 30% less consumption.

This is the highest jump yet, -200mV. Just 300MHz lost but another 16W gained.
At this point, the Haswell levels up with Ivy. 23% less horsepower but 42% less consumption. Perfect. Now the fan was totally inaudible and the CPU ran on 41°C when fully loaded.

2.7GHz is more than enough for most applications and games.

Although quite a jump, I don't think this settings has good performance per ratio. We had to go down 500MHz only to gain 7W. So far the 2.7GHz seems to be the best one.

Undervolting era is clearly not taboo, although we thought so when Intel came with voltage locked Arrandale. Skylake will introduce much better efficiency than today's Haswell, but does VID remain unlocked? We'll see soon enough.

In the meantime, happy OCing and UCing ;)

Interesting part about UCing CPU, altough i don't agree with the Ivy vs Haswell comparison.

You're comapring a Laptop to a desktop here, first a desktop has way more chips and other stuff then a laptop (even if nothing is attached it still consumes some power). Second your laptop most likely uses a iGPU for the desktop while the HD7750 in your desktop uses 10-15w or so in idle.

Only way to compare Ivy vs Haswell is laptop vs laptop or desktop vs desktop :)

My system needs about 270-300w with everything at stock, CPU can be cooled pretty much without fan at stock :P

No, I was talking about package power, not total consumption. CPU Package power is lower on Ivy compared to that on Haswell with same frequency and performance.

My CPU needs about 32-35w package according to software, I don't believe that(to low :P),

No, those numbers are just about right ;). 4670K doesn't feature hyperthreading, so it's lower wattage on full load is to be expected.
If you want more info on Haswell's lower efficiency, read here
Those values were measured with Throttlestop and confirmed in HWInfo

Same here, around 10% undervolted and with turbo 4,5Ghz on stock voltages

We know ttank ;)
Most important is that you're happy with it, and that's what it really is about.