I write this to put a spotlight on an area of video games that gets often neglected. Especially when reviewing a game. I mean, where do you put voice acting? It doesn't directly belong to neither story nor gameplay. If you are willing to dig deeper, the obvious solution would be to look in the "character" category. But that doesn't seem right either. While the voice of a character is essential part of it, but not always, it is not a way to describe it. When we're usually perceiving and judging a character, we think about its background, temperament, and specifically how well a character is written.
Voice and voice acting is a means to pass that character, everything it represents and stands for to a player. In this way, voice acting can completely change the narrative. No matter how good a story is, bad voice acting will destroy it. On the other hand, every authentic sound that the character makes, also makes the action so more easier to perceive and understand.
The way that voice actors can effectively bend a character to their will, for better or worse, can be well seen in this video. Nolan North (Nathan Drake from Uncharted), one of the best in the biz, speaks quotes of either Nathan Drake, or a star raper Drake and Troy Baker, another famous voice actor, is put up to the test of guessing who said the quote. While the video is meant for entertainment, I want to especially highlight the part from 1:33 up to around 2:08, where Nolan uses his skills to essentially trick Troy into picking a wrong person.

This is what I'm trying to say. Quotes can be remembered, but it is up to a voice actor that must present it to you in a satisfactory way. Otherwise, the quote can easily be given to another person, completely changing the situation in which it was said, or even go so far to changing the meaning completely.

Words are therefore not the only way to pass along the message. Body language, music and the noises that characters make, voice actors have to work along side these things to present emotions and story. Even in a nonverbal communication:

Right because of that is Brothers: a tale of two sons one of my favorite games. I don't know any other game that would be so emotional and so deep without using words. Music, environment, visuals and writing all contribute to that, but it's because of that unique communication between characters that makes you sympathetic towards them and the story. With words or without them.
Here, I would like to compare two games that are pretty similar: Both came out this year, both are adventure side-scrollers with some puzzles in them. I'm talking about Oxenfree and Inside. The latter, I simply despise. If there actually is story in this game, it is presented in such a vague way that it just ends up being swept aside. The way, or the lack of thereof, of communicating the message and the story is completely missed. The game entirely relies upon the darker tone and atmosphere with the combination of some shocking events that unravel in a way that only leaves you in bigger confusion, never to be understood. The environments are also a highlight of the game, but if there was a point of what it tried to communicate, it was lost in dull, but still time-consuming puzzles.
The few strong points of the Inside, are also featured in Oxenfree, but are outshined by additional great story, wonderful and diverse characters, and fantastic writing. All of these are expressed via honest and entertaining dialogue, which is passed onto the player with genuine and immersive voice acting. None of the great features would be impressive on such scale, if there would be no voice acting. If there would be only texts to accompany the playthrough, I would probably never enjoyed this game as much as I did. It really made the difference. 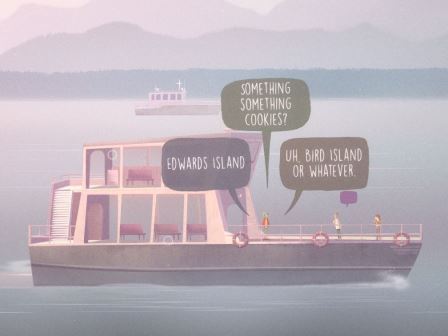 It is this ability to convey the story the world and the characters that requires of them to have a very unique set of skill. The best voice actors are the ones that are capable to produce multiple voices on the highest level, without you even realising that they come from the same person.
Because of this difficulty of the profession that makes the best voice actors not bound to as single area, like video games. They take part in movies, TV shows, commentating, radio etc. I would dare to say, that most voice actors would also make decent, at least, actors in front of a camera.
One of my favorite voice actors with these multiple skills is James Arnold Tailor. A voice behind Obi-Wan in The Clone Wars series and many games, Ratchet in Ratchet and Clank and Tidus from Final Fantasy X, to name a few. he is capable of producing incredible span of voices on the highest level and is very open about his craft and a lot can be learned about voice acting from him.
Below are a couple of videos about his career, including one where he explains that awkward laugh in FFX.

When talking about the immense quantity and quality of voice-over in video games, I can't go on without mentioning one of my favorite developers: Bioware. Whether you may think of their games, they all share two thing: great story and AMAZING voice acting. With Franchises like Mass effect, Dragon Age and The Old Republic, Bioware is leading company in the way how to make an expansive world, unique characters, and then how to present them in a spectacular way, probably only rivaled by Square Enix.

Speaking of Square Enix... Their soon to be released game Final Fantasy XV, which has been in development for just ridiculously long, is finally coming out this year. The franchise, that could be the most recognisable of the industry, embodies everything that I've talked about so far and present the most classic relationships and characters, but presents them in a new way. The prince on the run, youthful romance, father-son relationship and this brotherhood on a road is nothing particularly new, however the depth of the characters and the world overall, is something that has obviously been worked out very thoughtfully.
With Japanese developed games like this, there is always dilemma of what language to pick. I would like to encourage you to check the following video and tell what did you individually make of the English cast.

While I would say that the quality of voice acting and therefore the ability to tell this deep story, is on extremely high level, however, I am still not sure whether some voices match certain characters. Robbie Daymund (Prompto), Chris Parson (Gladiolus), Amy Shiels (Luna) And Darin De Paul (Ardyn Izunia) seem to fit their characters so well and make it look easy to personify their characters extremely well. Even Prompto, that was supposed to be that classic humorous character that everyone loves to hate, is probably expressed in such a great way that it might be my favorite character, if his development will be this good through the entire game. Still, I am not convinced by the voices of King Regis and Ignis. I'm just not sure that the voices match the characters. I would like something more Dumbledore or Gandalf for Regis, while I like the sophisticated Ignis, but I just can't match his face with his gruff voice.

For the last topic I will detach myself from pure voice acting. I want to talk about esports. I don't blame you if you bail at this moment, since a lot of people are not really into esports. If that's the case, then I hope I managed to shed some light on you about this important part of video games that is close and very dear to my hearth. But if you stick, I would like to discuss the topic of shoutcasting. Esports are getting more and more popular, as do games like Counter-Strike, Dota 2, FIFA, League of Legends, Rocket League, World of Tanks, Overwatch, Street Fighter etc.
Communication between players is important in high stake matches, but viewers in most cases don't have direct access to that. Instead the connection between the game and the viewer is presented through a commentator or a shoutcaster. The situation is in this way pretty similar to sports themselves. A tournament where the best competitors meet and decide between themselves who is the best. There are usually two casters. The play-by-play caster is there to enrich your experience by conveying information that a viewer might miss and overall situation of a match. They are valued for their articulateness and for their ability to describe each play or event of an often fast-moving sporting event. Alongside him is the technical co-comentator. This analyst or color commentator provides expert analysis and background information, such as statistics, strategy on the teams and athletes, and occasionally anecdotes or light humor. They are usually former athletes or coaches in their respective sports, although there are some exceptions. It is the chemistry, between the casters that make the stream so enjoyable.

While the job of a voice actor and a commentator are extremely different, the most obvious one being that commentators must provide viable content on a fly, while actors do so on script. The role however, is identical: providing the viewer with a message of the game. Both are your mediums through which you receive content from videogames. Also, both must really dive into their roles to present the content in the best possible way. One big difference worth acknowledging though is that while voice acting can directly make a game better or worse. They are part of it. The shoutcasters don't hold such power. Sure, they can be bad at their job, but the core game that they are commentating will remain the same, though the broadcast may be affected for you.

While not the only factor, the most crucial thing whether you'll enjoy an esport broadcast is probably whether you've played the game that is streamed and how well you know it. For a newcomer, these matched can be as stressful as is for the pro-players themselves.
I hope that I managed to show you a glimpse into the area of using your voice in video games, the are that I probably love the most. Below are some more shoutcasting highlights from multiple tournaments, which are entertaining, whether you like esports or not.

Keep playin what you want.