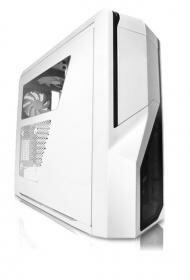 Release Period - Unknown Release Date
NZXT Phantom 410 Review
NZXT has proven to still have some punch in it when they presented the NZXT Phantom. The Phantom 410 is not only a much needed smaller version of the successful case, but also a case at that magical 100 Euro price point. The case clearly has the same genes as its bigger brethren and manages to offer the same great design and functionality we have seen in the taller version.
Due to the compact size, some elements had to be changed to fit the entire concept. The most noticeable one is the door, which now swings open to the left and the simpler fan controller. On top of that, the metal mesh hole size in the front of the Phantom 410 is much larger than that found on the Phantom and still lacks a dust filter. This is a design flaw, as NZXT has put so much thought into the design of the chassis and then clearly shows the raw fan in the front and top of the chassis.
Even though there is a small hint that the more compact version of the Phantom was not quite as well thought out in terms of the small details of the enclosure, the unit still looks quite similar. The Phantom 410 still remains a great chassis and deserves the same love as the big Phantom. It will be interesting to see if NZXT will also offer a pink version or a black &amp; orange one.
Quoted from:
Home site

Can't wait for my new rig with Phantom 410.. Its simply aawesome

It's simple and beautyfull!

Love this case, want it for my next build!!!