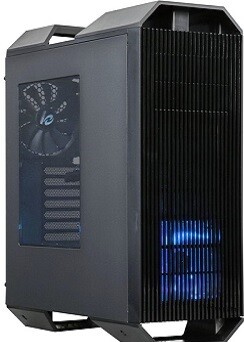 Release Period - Unknown Release Date
Raidmax Monster II Review
Raidmax did their best to launch an affordable midi tower with plenty of features but my guess is that they could have done better. Granted the Monster II has enough room for long graphics cards and tall CPU coolers, it has a separate PSU chamber and can accommodate even a 360mm radiator at the front but it falls short in other areas. For one you can’t place regular thickness fans and radiators at the top (just a thin radiator should be ok however) so that will certainly disappoint some users (I know we were). Also room for just three 3.5” drives and 2.5” drives (or five 2.5” drives) may indeed be more than just sufficient for most people but when there are midi towers that offer twice as many spots it’s hard to consider this as a strong selling point for the Monster II (although at the same time it’s not negative either). I did like to see that Raidmax ships the Monster II from the factory with two 140mm fans (although not exactly silent models) and those two vertical drive trays (something we don’t see a lot – although more than in the past) so the how much Raidmax asks for it could “make” or “break” it.


Right now the Monster II midi tower by Raidmax retails for USD59.99 inside the USA (Newegg.com) and for 69.99Euros inside the EU (PC-Cooling.de) a price tag that puts it on the lower end of similar models. Long story short the Monster II by Raidmax may not be one of the best midi towers to ever reach out lab (it has several tiny \"issues\" which are not important on their own but they do add up) but at the end of the day it offers a good set of features for a surprisingly affordable price and for that we strongly recommend checking it out.
Quoted from:
Home site