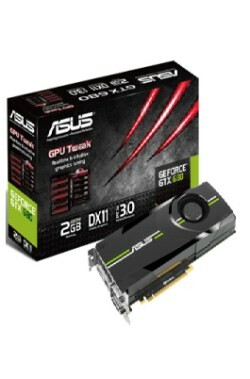 Here we take a closer look at the various performances across 1080p, 1440p and 4K screen resolutions for the GeForce GTX 680 Asus OC 2GB Edition. In particular this is looking at the Ultra graphics settings to see what sort of FPS this graphics card can get across some of the more popular games played in 2022. In comparison to the game recommended requirements of the 1000 most demanding games played today this PC hardware can run 204.

A GeForce GTX 680 Asus OC 2GB Edition card at 1080p is seeing a weak frame rate when running Days Gone on Ultra - 23 FPS. Lets look at the performance its getting on FIFA 22 which is 57 FPS. To add a bit more variety lets see how the popular Resident Evil 8 performs on this hardware, which gets a weak 0 FPS.

One of the growing popular screen resolutions for PC gaming is the wider 1440p. So we wanted to see how well the GeForce GTX 680 Asus OC 2GB Edition performed at 1440p by taking a look at some of the current popular games. First we looked at Days Gone and saw it deliver weak frames per second across the following graphics settings - Low: 45 FPS, Medium: 36 FPS, High: 24 FPS and Ultra: 17 FPS. We then checked the performance on FIFA 22 to see if that runs well. It was playable with a 43 FPS at Ultra 1440p. In summary we feel the GeForce GTX 680 Asus OC 2GB Edition running at 1440p is going to struggle to keep a solid FPS, but a modern game could have a few options tweaked to get it playable at this res but on low graphics settings.