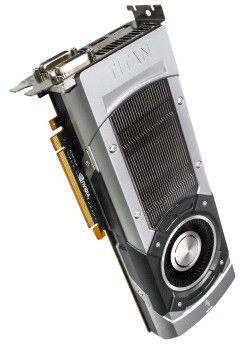 What FPS performance can the GeForce GTX Titan Asus Edition get on latest AAA 2022 games? In particular our game review looks at the FPS achieved running on Ultra graphics settings on the 1080p screen resolution as well as 1440p and 4K. This card runs recommended graphics requirements of 305 games from the top 1000 most demanding games being played today.

The GeForce GTX Titan Asus Edition graphics card is returning a weak performance on Battlefield 2042 at 1080p of 2 frames per second at Ultra graphics settings. Another popular title that is good to benchmark graphics cards against is Resident Evil 8 which we saw got weak frame rates of 22 FPS. A third game we can look at on Ultra at 1080p is the popular FIFA 22, which was getting 73 FPS under tests.

People are turning their increasingly more powerful graphics cards to the popular 1440p screen size so we tested the GeForce GTX Titan Asus Edition to see how it performs on 1440p. First off we have looked at Battlefield 2042 where it was weak. The frame rates it scored for the game presets were - Low: 4 FPS, Medium: 3 FPS, High: 2 FPS and Ultra: 2 FPS. We added Resident Evil 8 to our tests and saw it was weak with a 17 FPS at Ultra 1440p. And then tested FIFA 22 which got 55 FPS at Ultra 1440p. After a look at the popular games running at 1440p with the GeForce GTX Titan Asus Edition, this is not ideal and its more advisable to run modern games at 1080p resolution. But if you really want to play games at 1440p then you will likely have to make some graphical adjustments to improve game FPS stability.

GeForce GTX Titan Asus Edition is a special edition of the high-end GeForce GTX Titan. Check its page to know more about its Core.
This edition has no special features - no overclocking out of the box and no custom cooling system.
Therefore, its performance is exactly like the reference GeForce GTX Titan.