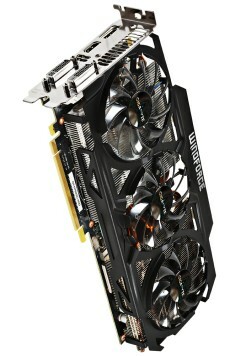 Lets look at the GeForce GTX 780 WindForce 3X OC Edition game performance guide for some of the biggest games played in 2022. In particular we will see how well this graphics card runs on Ultra settings on 1080p resolution as well as 1440p and 4K. We look at 1000 of the most demanding games available today and this GPU is better than the recommended graphics requirement of more than 304 games in the list.

First we looked at 1080p resolution for the GeForce GTX 780 WindForce 3X OC Edition performance to explore what sort of benchmarks it would achieve on the popular title Back 4 Blood and saw it deliver reasonable frames per second across the following graphics settings - Low: 123 FPS, Medium: 97 FPS, High: 65 FPS and Ultra: 47 FPS. We proceeded to look at Star Citizen to see how that compared and predict that it will return a reasonable 47 FPS at Ultra 1080p.

People are turning their increasingly more powerful graphics cards to the popular 1440p screen size so we tested the GeForce GTX 780 WindForce 3X OC Edition to see how it performs on 1440p. First off we have looked at Back 4 Blood where it was playable. The frame rates it scored for the game presets were - Low: 94 FPS, Medium: 74 FPS, High: 50 FPS and Ultra: 35 FPS. We added Star Citizen to our research and predict it will be playable with a 35 FPS at Ultra 1440p. And then tested Dying Light 2 which got 11 FPS at Ultra 1440p. Looking at a few of these 1440p results for the GeForce GTX 780 WindForce 3X OC Edition we get the impression that it is a suitable graphics card for this larger screen res. In some cases we might expect some graphics option tweaks down from Ultra to High to help improve FPS stability when gaming at 1440p.

GeForce GTX 780 WindForce 3X OC Edition is a special edition of the high-end GeForce GTX 780.
This edition comes with a custom triple fan cooling solution which by itself should allow a slight performance boost, as GeForce GTX 780 benefits from the GPU Boost 2.0 technology.
Also, it has been overclocked out of the box from 863MHz to 954MHz while its boost clock is now of 1006MHz. The memory clock was left untouched.
Benchmarks indicate a 7% performance boost when compared to the reference card and so this edition performs very slightly better than GeForce GTX Titan.