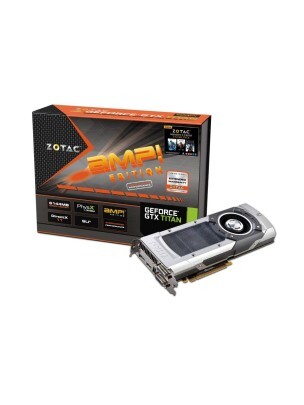 We take a look at game performance achieved on this graphics card when running 2021 popular games. This short GeForce GTX Titan Zotac AMP! Edition game hardware review looks at the graphics card frame rate performance on Ultra graphics settings at 1080p, 1440p and 4K screen resolutions. In comparison to the game recommended requirements of the 1000 most demanding games played today this PC hardware can run 374.

A GeForce GTX Titan Zotac AMP! Edition card at 1080p is predicted to see a reasonable frame rate when running Forza Horizon 5 on Ultra - 48 FPS. Lets look at the predicted performance it will get on Grand Theft Auto VI which is 19 FPS. To add a bit more variety lets see how the popular Resident Evil 8 performs on this hardware, which gets a playable 25 FPS.

GeForce GTX Titan Zotac AMP! Edition is a special edition of GeForce GTX Titan. Check the page of the reference card to know more about its Core.
It comes overclocked out of the box in the central unit, which was increased to 902MHz and can now achieve 954MHz, in Turbo Mode and might surpass the 1GHz barrier, as it's known, Titan has the Kepler GPU Boost 2.0, which raises the GPU's central unit and Shaders speeds to a frequency even higher to the one the Turbo Boost allows, if the GPU's temperature and Voltage allows it.
Benchmarks indicate a 4% performance boost when compared to the reference card.