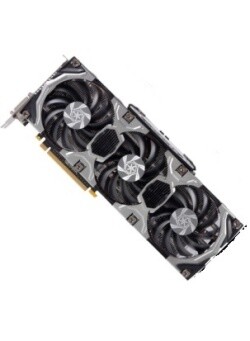 Here is a performance review on how capable the GeForce GTX 780 Inno3D Ice Dragon Edition is at running the more popular games of 2022. Specifically looking at this PC hardware’s ability to get suitable frames per second to play on Ultra game settings and what FPS it might get on 1080p, 1440p and 4K screen res. This card runs recommended graphics requirements of 305 games from the top 1000 most demanding games being played today.

The GeForce GTX 780 Inno3D Ice Dragon Edition graphics card is returning a weak performance on Forza Horizon 5 at 1080p of 23 frames per second at Ultra graphics settings. Another popular title that is good to benchmark graphics cards against is Battlefield 2042 which we saw got weak frame rates of 4 FPS. A third game we can look at on Ultra at 1080p is the popular Resident Evil 8, which was getting 23 FPS under tests.

GeForce GTX 780 Inno3D Ice Dragon Edition is a special edition of the high-end GeForce GTX 780.
This edition comes with a custom triple fan cooling solution which by itself should allow a slight performance boost, as GeForce GTX 780 benefits from the GPU Boost 2.0 technology.
Also, it has been overclocked out of the box from 863MHz to 1006MHz while its boost clock is now of 1046MHz. The memory clock was also increased to 1553MHz.
Benchmarks indicate a 11% performance boost when compared to the reference card.