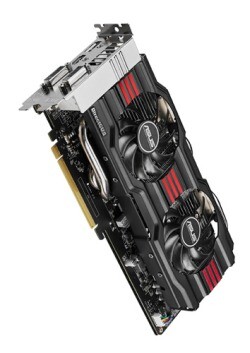 This PC hardware performance game review for the GeForce GTX 770 DirectCU II 2GB OC Edition graphics card, when running 2022 more popular games, lets us see what type of FPS this card gets when playing at 1080p, 1440p and 4K screen resolutions and ultra settings. In comparison to the game recommended requirements of the 1000 most demanding games played today this PC hardware can run 239.

A GeForce GTX 770 DirectCU II 2GB OC Edition card at 1080p is predicted to see a playable frame rate when running Star Citizen on Ultra - 31 FPS. Lets look at the performance its getting on FIFA 22 which is 59 FPS. To add a bit more variety lets see how the popular Grand Theft Auto VI is predicted to perform on this hardware, which gets a weak 0 FPS.

GeForce GTX 770 DirectCU II 2GB OC Edition is a special edition of the high-end GeForce GTX 770.
This edition comes with a custom cooling solution, 20% cooler and 3X quieter, which by itself should allow a slight performance boost, as GeForce GTX 770 benefits from the GPU Boost 2.0 technology.
Also, it has been overclocked out of the box from 1046MHz to 1058MHz while its boost clock is now of 1110MHz. The memory clock was left untouched.
Benchmarks indicate a 4% performance boost when compared to the reference card and so this edition performs very slightly better than GeForce GTX 590.