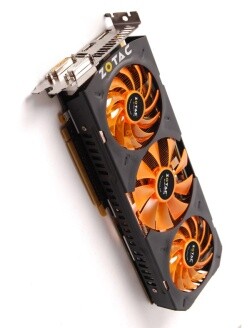 We take a look at game performance achieved on this graphics card when running 2021 popular games. This short GeForce GTX 780 Zotac OC Edition game hardware review looks at the graphics card frame rate performance on Ultra graphics settings at 1080p, 1440p and 4K screen resolutions. We look at 1000 of the most demanding games available today and this GPU is better than the recommended graphics requirement of more than 311 games in the list.

The 1080p FPS on Ultra for the GeForce GTX 780 Zotac OC Edition shows us that Days Gone is getting a playable result of 39 FPS, and then we are seeing Star Citizen predicted to return a playable 43 FPS while another game on our list is the Grand Theft Auto VI which is predicted to get 14 frames per second at Ultra 1080p.

Next up we increase screen res tests to accommodate the growing in popularity 1440p screen size. So we researched the upcoming Star Citizen to predict how the GeForce GTX 780 Zotac OC Edition would deal with it. Our research revealed a playable series of FPS results across these graphics presets - Low: 86 FPS, Medium: 67 FPS, High: 45 FPS and Ultra: 32 FPS. Next we looked at Grand Theft Auto VI which we predict will be weak with a 11 FPS at Ultra 1440p. And finally looked at Days Gone that got an Ultra 1440p FPS of 29. After a look at the popular games running at 1440p with the GeForce GTX 780 Zotac OC Edition, this is not ideal and its more advisable to run modern games at 1080p resolution. But if you really want to play games at 1440p then you will likely have to make some graphical adjustments to improve game FPS stability.

GeForce GTX 780 Zotac OC Edition is a special edition of the high-end GeForce GTX 780.
This edition has been overclocked out of the box from 863MHz to 941MHz while its boost clock is now of 993MHz. The memory clock was left untouched.
Benchmarks indicate a 6% performance boost when compared to the reference card and so this edition performs on level with GeForce GTX Titan.