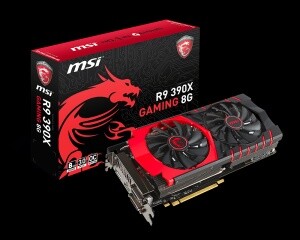 Here we take a closer look at the various performances across 1080p, 1440p and 4K screen resolutions for the Radeon R9 390X MSI Gaming 8GB Edition. In particular this is looking at the Ultra graphics settings to see what sort of FPS this graphics card can get across some of the more popular games played in 2021. We look at 1000 of the most demanding games available today and this GPU is better than the recommended graphics requirement of more than 396 games in the list.

A Radeon R9 390X MSI Gaming 8GB Edition card at 1080p is predicted to see a reasonable frame rate when running Star Citizen on Ultra - 52 FPS. Lets look at the performance its getting on FIFA 22 which is 91 FPS. To add a bit more variety lets see how the popular Dying Light 2 is predicted to perform on this hardware, which gets a playable 26 FPS.

Moving screen sizes up to 1440p we researched Star Citizen on the Radeon R9 390X MSI Gaming 8GB Edition and predict it will get a playable set of frame rates. Here are the low to ultra predictions at 1440p - L: 105FPS, M: 82FPS, H: 56FPS, U: 40FPS. Another popular game to test at 1440p with this card was FIFA 22 which seemed good in performance netting an Ultra FPS of 69 FPS. Finally we then took a look at Dying Light 2 where its predicted Ultra 1440p Frame rates were weak at 19 FPS. Running games at 1440p with a Radeon R9 390X MSI Gaming 8GB Edition is a good choice for running modern games at Ultra in this larger screen resolution.

Overclock: Memory Clock
The Operating Memory Clock is now of 1525MHz, instead of 1500MHz.


Cooling Solution
MSI’s Twin Frozr V Thermal Designs are equipped with Zero Frozr technology which was first introduced by MSI back in 2008. Zero Frozr technology eliminates fan noise in low-load situations by stopping the fans when they are not needed. Compared to other graphics cards, there is no continuous hum of airflow to tell you there’s a powerful graphics card in your gaming rig.