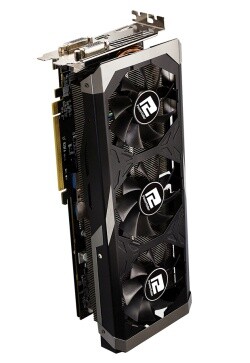 We take a look at game performance achieved on this graphics card when running 2021 popular games. This short Radeon R9 390X PowerColor PCS+ 8GB Edition game hardware review looks at the graphics card frame rate performance on Ultra graphics settings at 1080p, 1440p and 4K screen resolutions. In comparison to the game recommended requirements of the 1000 most demanding games played today this PC hardware can run 397.

The Radeon R9 390X PowerColor PCS+ 8GB Edition graphics card is predicted to return a playable performance on Battlefield 2042 at 1080p of 25 frames per second at Ultra graphics settings. Another popular title that is good to benchmark graphics cards against is Far Cry 6 which we predict will get weak frame rates of 20 FPS. A third game we can look at on Ultra at 1080p is the popular Resident Evil 8, which was getting 17 FPS under tests.

Cooling Solution
The Efficient Trio Fan design with the Mute Fan Technology delivers intelligent fan controlling to provide noiseless environment as well as reducing the power consumption when the GPU temperature is lower than 60°C.