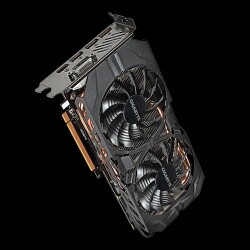 We take a look at game performance achieved on this graphics card when running 2022 popular games. This short Radeon R9 390X Gigabyte G1 Gaming 8GB Edition game hardware review looks at the graphics card frame rate performance on Ultra graphics settings at 1080p, 1440p and 4K screen resolutions. We look at 1000 of the most demanding games available today and this GPU is better than the recommended graphics requirement of more than 395 games in the list.

Now onto the frame rates achieved at 1080p. We predict that Star Citizen will get 52 FPS with the Radeon R9 390X Gigabyte G1 Gaming 8GB Edition, Grand Theft Auto VI predicted to get 17 FPS and Dying Light 2 predicted to get 26 frames per second. All run on Ultra at 1920x1080 screen res.

Cooling Solution
WINDFORCE 2X Cooling System: The airflow is spilt through the triangle design at the fan edge, and is guided smoothly through the fan by special 3D stripe curve design. At the same time, it effectively enhanced the cooling capacity while reducing air turbulence.