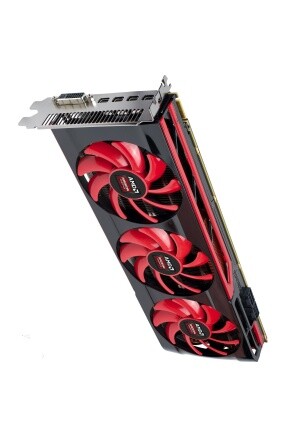 This PC hardware performance game review for the Radeon HD 8990 (OEM) graphics card, when running 2022 more popular games, lets us see what type of FPS this card gets when playing at 1080p, 1440p and 4K screen resolutions and ultra settings. The Radeon HD 8990 (OEM) can run the recommended graphics system requirements for 449 games today, of the top 1000 most demanding.

The Radeon HD 8990 (OEM) graphics card is returning a weak performance on Resident Evil 8 at 1080p of 22 frames per second at Ultra graphics settings. Another popular title that is good to benchmark graphics cards against is Forza Horizon 5 which we saw got playable frame rates of 44 FPS. A third game we can look at on Ultra at 1080p is the popular Back 4 Blood, which was getting 44 FPS under tests.

With PC gamers looking for larger screen sizes like 1440p we tested the Radeon HD 8990 (OEM) by playing Resident Evil 8 which yielded a weak performance. Its FPS results for the graphics settings are as follows - L: 44FPS, M: 35FPS, H: 23FPS, U: 17FPS. Another popular game we tested with this card was Forza Horizon 5 and that was playable. This graphics card delivered 33 FPS at Ultra 1440p. Another popular title was Back 4 Blood which gets playable results with a 33FPS on Ultra 1440p. Gaming at 1440p with the Radeon HD 8990 (OEM) is a reasonable performance fit for this resolution. Some of the more resource intensive games may well need a few graphical tweak to get the most out of the graphics card at this increased resolution.

Overview
Radeon HD 8990 (OEM) is an OEM Only, Dual-Graphics Solution based on the Graphics Core Next (GCN) Architecture.

GPU
It equips two GPUs Codenamed Tahiti XT which together have 64 Compute Units activated and thus offer 4096 Shader Processing Units, 256 TMUs and 64 ROPs. The Central Unit is clocked at 950MHz and goes up 1000MHz, in Turbo Mode.

Memory
Each GPU accesses a 3GB frame buffer of Fast GDDR5 Memory, through a 384-bit memory interface. The size of the frame buffer is adequate. The Memory Clock Operates at 1500MHz.

Power Consumption
With a rated board TDP of 375W, it requires at least a 750W PSU with two available 8-pin connectors.

Performance
Radeon HD 8990 (OEM) is a Direct Rebrand of Radeon HD 7990 and performs exactly like it.

System Suggestions
Radeon HD 8990 (OEM) is best suited for resolutions up to and including 2560x1600. We recommend a Very Strong Processor (Intel Core i7 Quad Core/AMD FX Eight Core) and 16GB of RAM for Optimal Performance.