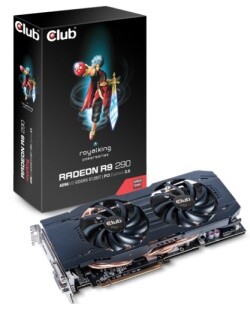 Here we take a closer look at the various performances across 1080p, 1440p and 4K screen resolutions for the Radeon R9 290 Club3D royalKing 4GB Edition. In particular this is looking at the Ultra graphics settings to see what sort of FPS this graphics card can get across some of the more popular games played in 2022. This graphics hardware can run 306 of the 1000 most demanding PC games played today.

First we looked at 1080p resolution for the Radeon R9 290 Club3D royalKing 4GB Edition performance to explore what sort of benchmarks it would achieve on the popular title Resident Evil 8 and saw it deliver weak frames per second across the following graphics settings - Low: 29 FPS, Medium: 23 FPS, High: 15 FPS and Ultra: 11 FPS. We proceeded to look at Star Citizen to see how that compared and predict that it will return a reasonable 48 FPS at Ultra 1080p.