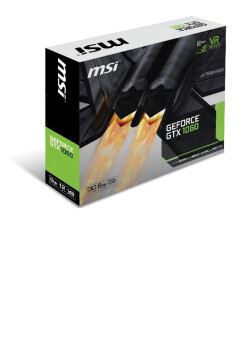 While some games have more powerful requirements than this GPU, the GeForce GTX 1060 MSI 6GT OC is only really challenged by the most demanding games released today, but normally it is more than capable of running games with a stable frame rate at 1080p.

This PC hardware performance game review for the GeForce GTX 1060 MSI 6GT OC graphics card, when running 2021 more popular games, lets us see what type of FPS this card gets when playing at 1080p, 1440p and 4K screen resolutions and ultra settings. In comparison to the game recommended requirements of the 1000 most demanding games played today this PC hardware can run 741.

With PC gamers looking for larger screen sizes like 1440p we tested the GeForce GTX 1060 MSI 6GT OC by playing Far Cry 6 which yielded a weak performance. Its FPS results for the graphics settings are as follows - L: 59FPS, M: 47FPS, H: 32FPS, U: 23FPS. Another popular game we researched with this card was Star Citizen and that was playable. This graphics card is predicted to deliver 42 FPS at Ultra 1440p. Another popular title was Dying Light 2 which is predicted to get weak results with a 24FPS on Ultra 1440p. Gaming at 1440p with the GeForce GTX 1060 MSI 6GT OC is a perfectly suitable selection of hardware for theis larger screen size. If a game at 1440p struggles a bit or experiences a frame drop then you can tweak settings in game to help get it stable. This might mean lowering it to medium or low in some specific options.

Overview
GeForce GTX 1060 is a Performance Graphics Card based on the Pascal Architecture.

Memory
The GPU accesses a 6GB frame buffer of Fast GDDR5, through a 192-bit memory interface, while the Memory Clock Operates at 2000MHz.

System Suggestions
GeForce GTX 1060 is best suited for resolutions up to and including 2560x1440. We recommend a High-End Processor and 8GB of RAM for Optimal Performance.