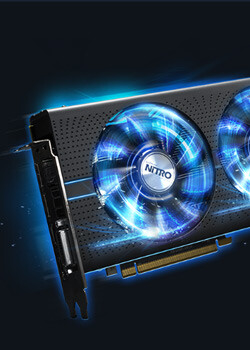 Here is a performance review on how capable the Radeon RX 480 Sapphire NITRO+ 4GB is at running the more popular games of 2022. Specifically looking at this PC hardware’s ability to get suitable frames per second to play on Ultra game settings and what FPS it might get on 1080p, 1440p and 4K screen res. We look at 1000 of the most demanding games available today and this GPU is better than the recommended graphics requirement of more than 480 games in the list.

A Radeon RX 480 Sapphire NITRO+ 4GB card at 1080p is seeing a reasonable frame rate when running Forza Horizon 5 on Ultra - 45 FPS. Lets look at the performance its getting on Battlefield 2042 which is 15 FPS. To add a bit more variety lets see how the popular Grand Theft Auto VI is predicted to perform on this hardware, which gets a weak 23 FPS.

One of the growing popular screen resolutions for PC gaming is the wider 1440p. So we wanted to see how well the Radeon RX 480 Sapphire NITRO+ 4GB performed at 1440p by taking a look at some of the current popular games. First we looked at Forza Horizon 5 and saw it deliver playable frames per second across the following graphics settings - Low: 90 FPS, Medium: 71 FPS, High: 48 FPS and Ultra: 34 FPS. We then checked the performance on Battlefield 2042 to see if that runs well. It was weak with a 11 FPS at Ultra 1440p. 1440p Radeon RX 480 Sapphire NITRO+ 4GB PC gaming is not the best resolution for this GPU, but if you adjust some graphics settings, perhaps lowering to medium or low at 1440p then this graphics card might be ok.

Overview
The Radeon RX 480 Sapphire NITRO+ 4GB is a smaller form factor performance graphics card based on the third revision of the Graphics Core Next (GCN) Architecture.

Architecture
It equips a GPU Codenamed Ellesmere XT, which is a forth gen GCN GPU and has 36 SM activated and thus offers 2304 shader processing units, 144 TMUs and 32 ROPs.

GPU
The central unit runs at 1208MHz and goes up to 1306MHz, when the boost is triggered.

Memory
The GPU accesses a 4GB frame buffer of fast GDDR5, through a 256-bit memory interface, while the Memory Clock Operates at 1750MHz.

Power Consumption
With a rated board TDP of 150W, it requires at least a 450W PSU with one available 8-pin connector.

System Suggestions
The Radeon RX 480 Sapphire NITRO+ 4 GB is one of the fastest 4GB versions of this card. It has great performance GPU for 1080p gaming. This card can run most modern games at 56+FPS on high graphics settings at that resolution.