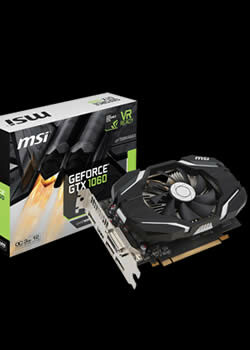 Here is a quick game performance synopsis for the AAA games played in 2022. In particular we focus on how well the GeForce GTX 1060 MSI OC 3GB runs at Ultra graphics settings and what frames per second it is getting at 1080p, 1440p and 4K monitor resolutions. 442 games can be played by this graphics card of the 1000 most demanding games being played by PC gamers today.

Looking at some of the modern popular games people are playing today the GeForce GTX 1060 MSI OC 3GB is running Far Cry 6 and delivering weak performances on 1080p Ultra, getting 23 frames per second. Comparing this to Forza Horizon 5 which is getting playable results, where it averages 30 FPS. Another popular game we looked at is Battlefield 2042, which is running at 12 frames per second.

Overview
The GeForce GTX 1060 MSI OC 3GB is an Overclocked variant of the GeForce GTX 1060 which is currently the entry level Nvidia GTX 1000 performance graphics card, based on the Pascal Architecture. It comes with locked memory of 3GB instead of the full 6GB.

GPU
The central unit runs at 1544MHz and goes up to 1759MHz, when Boost mode is activated.

Memory
The GPU accesses a 3GB frame buffer of GDDR5, through a 192-bit memory interface, while the Memory Clock Operates at 2002MHz.

Performance
The GeForce GTX 1060 MSI OC 3GB is a high performance graphics card that can run triple AAA games from 2016 at 1080p on very high graphic settings and delivering 60+ frames per second. At a screen resolution at 1440p is will run these same games on high/medium at 60 fps. The 3GB memory reduction that will hamper the high quality game textures that this card can deliver, making it less future proof as more GPU memory hungry games are released. This is a small form card that will be perfect for those wanting to conserve space inside their build.