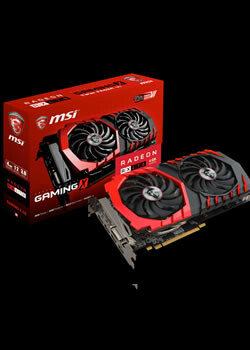 Here is a performance review on how capable the Radeon RX 470 MSI Gaming X 4GB is at running the more popular games of 2022. Specifically looking at this PC hardware’s ability to get suitable frames per second to play on Ultra game settings and what FPS it might get on 1080p, 1440p and 4K screen res. When considering how well this graphics card can run the 1000 most demanding games available today it can best 307 of the games’ recommended graphics requirements.

First we looked at 1080p resolution for the Radeon RX 470 MSI Gaming X 4GB performance to explore what sort of benchmarks it would achieve on the popular title Forza Horizon 5 and saw it deliver playable frames per second across the following graphics settings - Low: 86 FPS, Medium: 68 FPS, High: 46 FPS and Ultra: 33 FPS. We proceeded to look at Days Gone to see how that compared and saw that it returned a playable 41 FPS at Ultra 1080p.

People are turning their increasingly more powerful graphics cards to the popular 1440p screen size so we tested the Radeon RX 470 MSI Gaming X 4GB to see how it performs on 1440p. First off we have looked at Forza Horizon 5 where it was playable. The frame rates it scored for the game presets were - Low: 65 FPS, Medium: 52 FPS, High: 35 FPS and Ultra: 25 FPS. We added Days Gone to our tests and saw it was playable with a 31 FPS at Ultra 1440p. And then tested Battlefield 2042 which got 0 FPS at Ultra 1440p. After a look at the popular games running at 1440p with the Radeon RX 470 MSI Gaming X 4GB, this is going to struggle to keep a solid FPS, but a modern game could have a few options tweaked to get it playable at this res but on low graphics settings.

Overview
The AMD RX 470 MSI Gaming X 4GB graphics card is a 2016 released performance graphics card based on the third revision of the Graphics Core Next (GCN) architecture. This card competes against Nvidia's outgoing, but very popular, GTX 970 and the incoming GTX 1050 Ti, when that releases.

GPU
The central unit runs at 926MHz and goes up to 1242MHz, when boost mode is triggered.

Power Consumption
With a rated board TDP of 110W, it requires at least a 400W PSU with one available 8-pin connector.

Performance
The AMD RX 470 has been built as a Mid/High performance graphics card for 2016 and this card is not much different. It will run most triple AAA titles released during 2016 on medium to high graphics at 1080p screen resolution. With adjustments and lowering anti aliasing this card can confidently maintain 60+ frames per seconds on high graphic settings at 1080p. Moving to 1440p screen resolution and the graphics card may need to be adjusted down to medium in order to maintain 50-60+ fps.

System Suggestions
The RX 470 MSI Gaming X is best suited for resolutions up to and including 1920x1080. We recommend a mid range processor and at least 8GB of system memory for optimal performance.