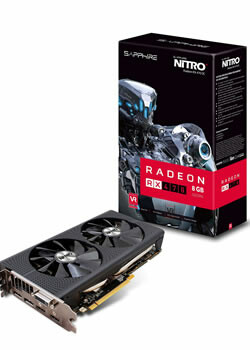 This PC hardware performance game review for the Radeon RX 470 Sapphire Nitro+ 8GB graphics card, when running 2022 more popular games, lets us see what type of FPS this card gets when playing at 1080p, 1440p and 4K screen resolutions and ultra settings. The Radeon RX 470 Sapphire Nitro+ 8GB can run the recommended graphics system requirements for 378 games today, of the top 1000 most demanding.

First we looked at 1080p resolution for the Radeon RX 470 Sapphire Nitro+ 8GB performance to explore what sort of benchmarks it would achieve on the popular title Dying Light 2 and predict it will deliver weak frames per second across the following graphics settings - Low: 63 FPS, Medium: 50 FPS, High: 34 FPS and Ultra: 24 FPS. We proceeded to look at Back 4 Blood to see how that compared and saw that it returned a playable 39 FPS at Ultra 1080p.

With PC gamers looking for larger screen sizes like 1440p we tested the Radeon RX 470 Sapphire Nitro+ 8GB by researching Dying Light 2 leading us to predict a weak performance. Its FPS predictions for the graphics settings are as follows - L: 48FPS, M: 38FPS, H: 26FPS, U: 18FPS. Another popular game we tested with this card was Back 4 Blood and that was playable. This graphics card delivered 29 FPS at Ultra 1440p. Another popular title was Far Cry 6 which gets weak results with a 14FPS on Ultra 1440p. 1440p gaming on the Radeon RX 470 Sapphire Nitro+ 8GB is not ideal and its more advisable to run modern games at 1080p resolution. But if you really want to play games at 1440p then you will likely have to make some graphical adjustments to improve game FPS stability.

Overview
The AMD Radeon RX 470 Sapphire Nitro+ 8GB graphics card is the king of the RX 470 hill, a 2016 released performance graphics card based on the third revision of the Graphics Core Next (GCN) architecture, it trumps all other competitors in the 470 catergory. This card competes against Nvidia's outgoing, but very popular, GTX 970 and the incoming GTX 1050 Ti, when that releases.

GPU
The central unit runs at 1121MHz and goes up to 1260MHz, when boost mode is triggered.

Memory
The GPU accesses a 8GB frame buffer of GDDR5, through a 256-bit memory interface, while the memory clock Operates at a staggering 2000MHz.

Power Consumption
With a rated board TDP of 120W, it requires at least a 450W PSU with one available 8-pin connector.

Performance
The AMD RX 470 has been built as a Mid/High performance graphics card for 2016 and this is probably the best example of one. It will run most triple AAA titles released during 2016 on medium to high graphics at 1080p screen resolution. With adjustments and lowering anti aliasing this card can confidently maintain 60+ frames per seconds on high graphic settings at 1080p. Moving to 1440p screen resolution and the graphics card may need to be adjusted down to medium in order to maintain 50-60+ fps.

System Suggestions
The RX 470 cards are best suited for resolutions up to and including 1920x1080. We recommend a mid range processor and at least 8GB of system memory for optimal performance.